Final penalty hardly the only mistake for Giants 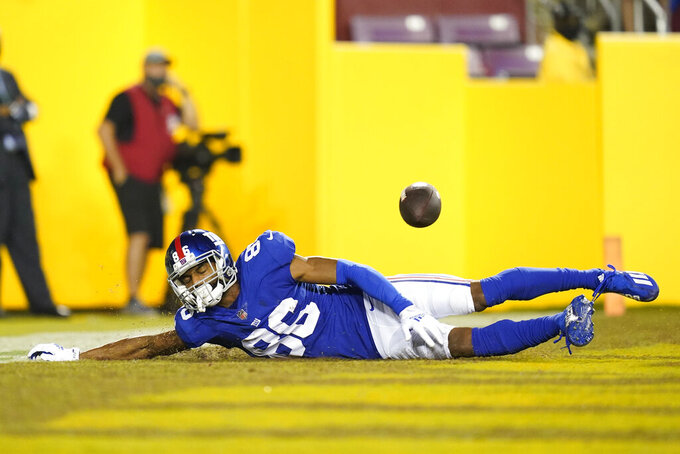 New York Giants wide receiver Darius Slayton (86) drops a pass as he goes sliding into the end zone during the second half of an NFL football game against the Washington Football Team, Thursday, Sept. 16, 2021, in Landover, Md. (AP Photo/Patrick Semansky)

Nope. Another mistake was about to cost the Giants.

Dexter Lawrence was flagged for being offside on Washington's final field goal attempt, and the re-kick went through the uprights on an untimed down, handing the Giants a 30-29 loss Thursday night. That was hardly the only big error for New York, though.

“It comes down to the small details and obviously we didn't get those done today,” receiver Sterling Shepard said. “It's something that we've got to go back to the drawing board and get corrected.”

In the first half, Jones appeared to break free for a 58-yard touchdown, but a holding call on receiver C.J. Board — who was just elevated from the practice squad before the game — put the ball on the Washington 22 instead. The Giants settled for a field goal.

New York had a chance to take a two-score lead in the fourth quarter when Jones threw deep to Slayton, who was all alone behind the defense. The pass may have been a bit long, but Slayton still had a good chance to make the catch and dropped it.

Again, the Giants kicked a field goal, but their 26-20 lead was erased almost immediately.

There was a lot New York did well in this game. The offensive line — despite losing Nick Gates to a broken leg in the first quarter — largely contained Washington’s feared pass rush.

Graham Gano kicked five field goals, including some pretty long ones, and New York scored on every second-half possession but one. The Giants also played a turnover-free game.

When they had a chance to take control of the game and ultimately win it, however, the Giants made the night's most significant miscues.

By Mark Long 40 minutes ago
By Simmi Buttar an hour ago
2 hrs ago
By John Wawrow 2 hrs ago
By Teresa M. Walker 2 hrs ago