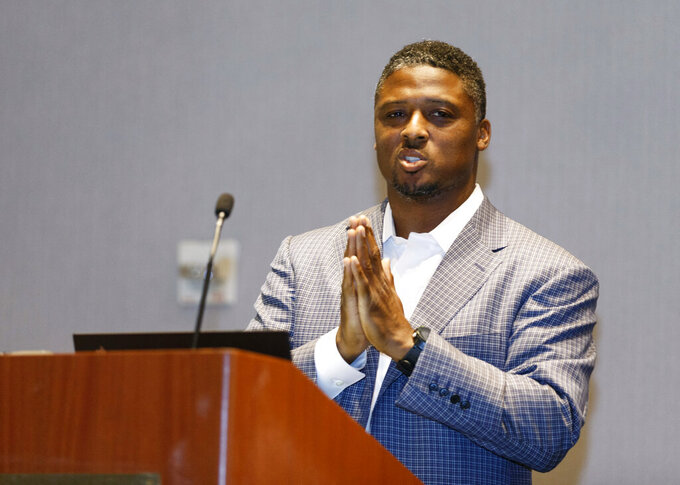 FILE - Former NFL player Warrick Dunn speaks at the "Beyond the Physical: A Symposium on Mental Health in Sports" hosted by the NFL, NFL Players Association and Cigna at Georgia Tech Hotel and Conference Center in Atlanta, in this Monday, May 14, 2018, file photo. Former NFL star Warrick Dunn is hosting a conversation centered on diversity and inclusion as part of his charity’s Juneteenth celebration. Dunn, a three-time Pro Bowl running back with the Tampa Bay Buccaneers and Atlanta Falcons, will sit down with NFL Network host Steve Wyche on Thursday evening, June 10, 2021, for a virtual chat featuring guest appearances from various players past and present. (AP Photo/Todd Kirkland, File)

Former NFL star Warrick Dunn is hosting a conversation centered on diversity and inclusion as part of his charity’s Juneteenth celebration.

Dunn, a three-time Pro Bowl running back with the Tampa Bay Buccaneers and Atlanta Falcons, will sit down with NFL Network host Steve Wyche on Thursday evening for a virtual chat featuring guest appearances from various players past and present.

“It’s important to have a conversation just about diversity and inclusion,” Dunn said. “We want to be able to educate companies on the topic but also give them solutions. I just think the biggest step toward that would be starting a dialogue. A lot of times people don’t want to talk about a lot of the issues, but you have to be open and honest and have an open dialogue about the issues. Then, come with how can we solve these problems and make diversity and inclusion and corporation equal for all and not just for the upper echelon."

Juneteenth is the celebration of what occurred June 19, 1865, the day that enslaved Black people in the U.S. learned they had been emancipated.

The second part of Warrick Dunn Charities’ Juneteenth celebration is a virtual wine, dine and cigar event on June 25 featuring various players, including Hall of Famers and celebrities. Dunn’s mission is to empower families to break the cycle of generational poverty.

“It starts really with housing,” Dunn said. “That’s the quickest way to build wealth in this country for families, but also having stability creates opportunity for kids to live a better and stable life, to perform better in school, to want to thrive and just want to be better. Having stable housing is key to that.”

Dunn founded the “Homes for the Holidays” program as a rookie in the NFL to fulfill his mother’s dream of home ownership for single-parent families, and it has since helped 189 homeowners and 512 dependents in 24 markets. His mother, police officer Betty Smothers, was killed in the line of duty in 1993, two days after Dunn turned 18. He helped raise his five siblings while going to Florida State.

Over the years, Dunn’s home-building program has transitioned to also helping families and children learn financial literacy and teaching them how to eat healthy and affordable meals.

“There’s so many issues and inequalities that families face when it comes to home ownership, the opportunity to help advance their families with education,” Dunn said. “When you live in low-income communities, usually the schools are not high-performing schools. They just don’t have the same resources and access to health care and so forth in these low-income, moderate communities. For me, it’s really supporting those families and those individuals along that journey of home ownership, but also pushing them to do their part. We don’t give handouts. What we do is we really assist families and give them a hand up.”