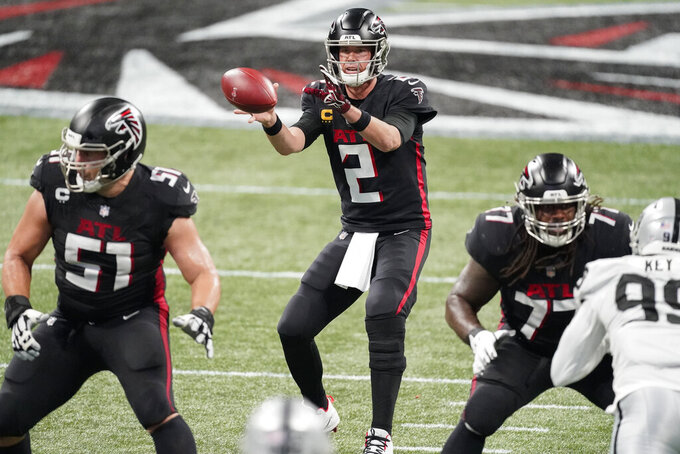 Atlanta Falcons quarterback Matt Ryan (2) works in the pocket against the Las Vegas Raiders during the first half of an NFL football game, Sunday, Nov. 29, 2020, in Atlanta. (AP Photo/John Bazemore)

LOS ANGELES (AP) — If a team is still trying to figure out its identity going into the last quarter of the season, that's usually a sign things aren't going well. Such is the state of affairs for the Atlanta Falcons and Los Angeles Chargers as they prepare for Sunday's game.

Both teams have been an enigma to coaches and fans in the ways they have squandered games. That's why both are focused on draft pick positioning and what changes are going to be made during the offseason.

“Their local guys are probably saying the same thing about us right now. They’re asking Anthony Lynn the same type of things. Who is this team? What is this team? What are they capable of doing? With all of that being said, you have to think of who they are now on tape," Falcons coach Raheem Morris said.

Atlanta is 4-3 under Morris after Dan Quinn was fired for an 0-5 start, but it still is a defeat away from consecutive losing seasons for the first time since 2001. Lynn is on the hot seat with Los Angeles (3-9) assured of a losing season for the second straight year.

While Falcons owner Arthur Blank is preparing to evaluate general manager and coaching candidates, Chargers owner Dean Spanos would like to wait until the end of the season before making any final decisions. However, a repeat of last week's 45-0 loss to New England, the largest in franchise history, could move up that timeline.

This may also be a game when no lead is safe because both have a mystifying case of “can you top this?” when it comes to blowing games. Atlanta squandered leads of 16 points or more two straight weeks, including a 20-point advantage against Dallas on Sept. 20. Los Angeles went one step further, becoming the first team in NFL history to squander leads of 16 points or more in four straight games. The Chargers' nadir came on Nov. 1 when they were up by 21 in the third quarter only to see Denver rally for a win on the final play of the game.

“We talk about life situations all the time. We're in a valley right now, but we’re down but we’re not out. So, we’re gonna finish the season out the right way,” Lynn said. “You can only talk so much. You got to go out and execute.”

Chargers rookie Justin Herbert is fourth in the league in passing yards per game (278.5) while Atlanta's Matt Ryan is eighth at 270.6. Both can accomplish significant milestones Sunday.

Ryan, who has 54,622 career yards, needs 207 to surpass Peyton Manning for most by a player in his first 13 seasons. Herbert needs two touchdown passes to become the fourth rookie with at least 25.

Ryan said he had a chance to meet Herbert before the start of the season and has been impressed.

“We’ve seen them a couple of times on film playing like opponents and he’s played extremely well, not only for a rookie but for anybody,” said Ryan of Herbert. "He’s gone out there, been really competitive, very accurate, and battled. I think he’s only going to get better. I think he’s going to do a great job moving forward.”

The Falcons must improve their running game, a big reason for the team’s red-zone woes.

Atlanta rushed for only 70 yards in last week’s loss to the Saints. Todd Gurley was thrown for a 7-yard loss on a crucial third-down run from the Saints 12 with less than two minutes remaining, ruining a chance for the Falcons to pull off an upset.

The Falcons have touchdowns in only 50% of their red-zone possessions this season, ranking 29th out of 32 teams.

Kicker Younghoe Koo has emerged as one of Atlanta’s most valuable weapons.

The South Korean is riding a streak of 24 straight field goals since his only miss of the season in Week 3. Most impressively, Koo has connected on all seven of his attempts from at least 50 yards.

Koo began his career with the Chargers in 2017 and was the first of nine kickers during Lynn's tenure. LA's Michael Badgley missed only four field goals his first two seasons, but has missed seven this year, including two last week. The Chargers have been abysmal on special teams, which has caused Lynn to take over coaching duties.

Calvin Ridley made it clear coming into the season that one of his biggest goals was 1,000 yards receiving. He’s almost there.

Atlanta’s third-year receiver has 59 catches for 905 yards and seven TDs.

“I know that was a personal goal for him coming into the season. He was vocal about it,” Ryan said. "Hopefully he stays healthy and has great finish to the rest of the season.

Chargers wide receiver Keenan Allen set a franchise record with 16 receptions against the Jets on Nov. 22 but has been held in check the past two games with only nine catches.