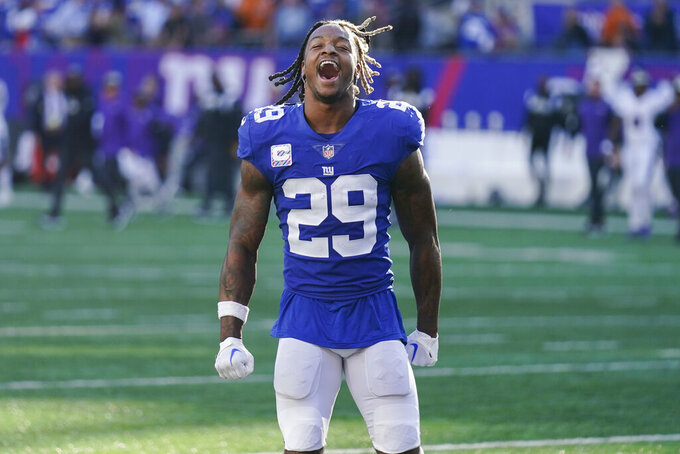 EAST RUTHERFORD, N.J. (AP) — New York Giants safety Xavier McKinney accepted responsibility for the off-road accident that injured his left hand during the bye week and will force him to miss at least the next four games.

Speaking to reporters on Tuesday for the first time since the mishap in Mexico last week, McKinney said his injured fingers were surgically repaired when he returned to the United States. He wore a hard cast on his hand and a sling over his shoulder. There is no timetable for his return.

McKinney was vague in giving details about the accident which he said happened on Wednesday of last week. The 23-year-old would not say whether he was a passenger or was driving what he described as a Can-Am. When he tweeted about the accident Monday he had said it was on an ATV.

Coach Brian Daboll would not give details of McKinney's injury or whether he would be subject to team discipline.

The Giants (6-2) put McKinney on the non-football injury list, meaning he will miss at least the next four games. There is a chance the team could withhold pay from McKinney because the accident was off the field.

McKinney said the injury has emotionally taken a toll on him, especially with the Giants in the hunt for the first playoff berth since 2016.

“I know how much we have collectively as a group put into what we’ve done to build where we’re at now,” he said. “So it hurts a lot from me. Mentally. It's been kind of a mental roller coaster for me, but, you know, I’m gonna continue to be here for my team.”

McKinney said there is no timeline for his return, but he will help teammates in meetings and at practice. He has been told he will have full use of his fingers when he recovers.

Rookie Dane Belton and veteran Landon Collins will replace McKinney on Sunday when the Giants play host to the Houston Texans (1-6-1).

Safety Julian Love will relay the plays from Martindale to the defense.

“He’s a rising star in this league, it’s tough to replace,” Love said. “He’s a guy who’s been holding down the deep part of the field for us, is able to do some good things for us to play fundamental football.

"I think the emphasis has to be on guys just to not let it feel like there’s such a big hole. That’s going to take, honestly, a community of guys right now to step up and fill the roles that he’s been able to play this season.”

Quarterback Daniel Jones said the team feels for McKinney, who led the team with five interceptions in 2021.

“I think guys are doing different things, and it’s their choice how they want to spend their time,” Jones said. “You can ask Xavier. He probably regrets it, and we feel for him. I think he certainly doesn’t want to be in that situation. We’ll support him. The next guy up has got to be ready to go.”