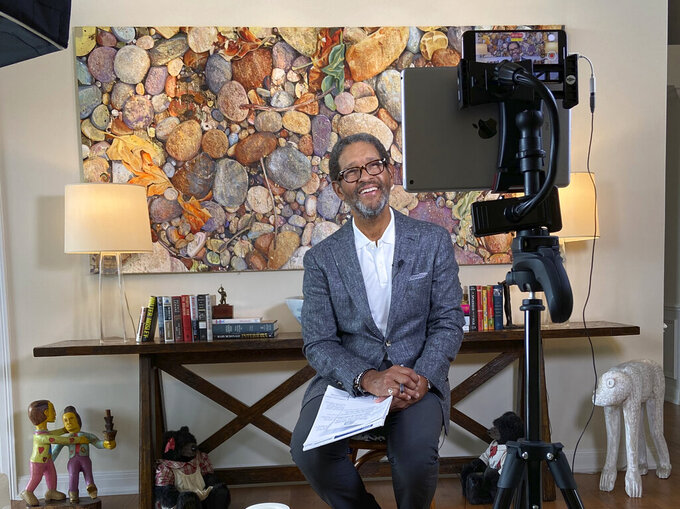 This image released by HBO Sports shows Bryant Gumbel hosting "Real Sports with Bryant Gumbel" from his makeshift studio in Florida. The series returns on April 28. (HBO Sports via AP)

NEW YORK (AP) — The HBO television show “Real Sports” is returning from a suspension forced by the coronavirus before the real sports themselves begin again.

Host Bryant Gumbel will preside from his Florida home in Tuesday's episode of the sports news magazine, which is attempting to navigate technical issues and strike the right balance in dealing with a pandemic that has changed every viewer's life.

The March episode was canceled, both because some necessary travel proved impossible and the worry that some segments would appear tone deaf at a time when the sports world was put on hold, Gumbel said.

April marks the 25th year that “Real Sports” has been on the air, and it barely made its anniversary month.

The host will appear Tuesday in a roundtable with sportscasters Mike Breen, Joe Buck and Jim Nantz. The show will have a story about quick pivots, such as a company that switched from manufacturing lacrosse helmets to protective gear for medical workers, and another piece on sports entities that moved too slowly to cancel events.

Gumbel said he understands people who might believe that stories on sports aren't right for the moment.

“But I also think you run the risk of overdoing it if (coronavirus) is all you have to offer,” he told The Associated Press on Monday. “We're like every other operator right now. We're trying to strike a very difficult balance between being responsive to what people want to know, and being responsive to that point at which they say, OK, I've had enough. Give me something else.”

The absence of sports right now isn't really an issue for the show, he said.

“We are in the business of telling stories that have nothing to do, or very little to do, with who won and who lost,” he said. “Our difficulty was and is that we are a monthly at a time when the overall issue in our environment is a story that is not just changing daily, but by the hour and minute.”

The need to make a show that can feel relevant Tuesday and in two weeks steered Gumbel and his roundtable panelists away from such things as predicting when sports may return to issues like whether they'd be comfortable traveling to assignments.

It's too early to tell which sports figures will emerge as leaders in any effort to bring games back, likening it to judging a trade or draft pick instantly instead of waiting for things to settle.

Gumbel hasn't hesitated to criticize the NFL in the past but believes league officials acted responsibly in conducting its annual player draft last week. The NFL was rewarded with weeks worth of high-profile coverage in newspapers and strong television ratings.

Gumbel offers a hat tip to his wife in helping him get the show off the ground again.

She's had to learn how to operate equipment sent to their home by HBO. She operates the camera, sets the lighting, manages the audio and applies the makeup.

He doesn't want to appear insensitive to people who are dying, but Gumbel can admit it: He misses sports a lot.

“Like everybody else, I think it was difficult for us to understand how much we watched, talked about it, cared about it, debated it, especially with our buddies,” he said. “It's left a void, there's no doubt about that.”