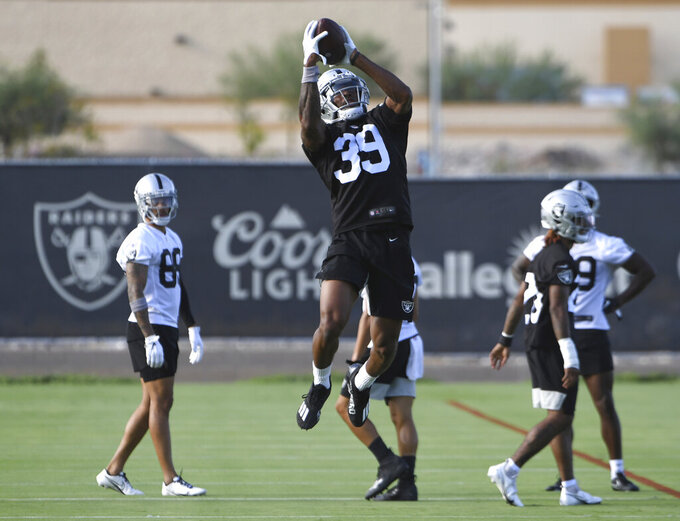 LAS VEGAS (AP) — There was a time when nobody knew who Nate Hobbs was, even though he was playing for the nation’s second all-time winningest high school football program.

Playing on both sides of the football, something Louisville’s Male High School coach Chris Wolfe doesn’t usually do with his players, Hobbs was a late bloomer and underrecruited.

“He blew up so big for us as far as an athlete,” said Wolfe, a head coach for 22 years. “I still remember telling people what an incredible athlete he had turned into: long, athletic, can jump, can run, great ball skills, physical player. When Illinois came in, they were just beside themselves that this kid was sitting in Louisville and had nobody to beat out.

“We knew he was something special. I knew it his senior year. I always thought he was one of the best, if not the best athlete I’ve ever coached. ”

Which is why Wolfe said he’s not surprised to see Hobbs — a fifth-round pick out of Illinois by the Las Vegas Raiders this year — emerge as the most pleasant surprise of the team's 2021 draft class.

Since training camp opened, Hobbs has been making what Raiders coach Jon Gruden labels impact plays, be it at practice or during the first two preseason games.

During the Raiders’ 20-7 win over Seattle, he registered a brutal blindside sack on Seahawks quarterback Geno Smith.

Last week in a 17-16 win over the Rams, with Las Vegas’ secondary a bit dinged up, Hobbs thrived in extended play, playing inside on nickel packages or outside in the cornerback position he's familiar with from high school and college. He finished with three tackles, one assist, one tackle for loss, two pass deflections, and one interception. His efforts earned him a game ball, something Gruden doesn’t normally do in the preseason.

“He has the ‘it’ factor,” Gruden said after the game. “He rarely makes the same mistake twice. He loves football, he eats it up and he’s one of the energizers of our defense. He’s walked in here and given us a lot of skills that we can utilize, certainly.”

Skills that Wolfe saw before anyone else, including those impact plays Gruden is looking for as he continues to zero in on carving out a 53-man roster.

Wolfe remembered Hobbs’ senior year and his role in the Bulldogs' big game against duPont Manual, a rivalry that dates back to 1893.

With Male clinging to a touchdown lead in front of 10,000 fans, Manual was driving in the waning moments when Hobbs intercepted a Hail Mary at the goal line as time expired. With Wolfe screaming “take a knee, get down,” Hobbs returned it 99 yards for a walk-off pick-six to seal a 27-14 win for the Bulldogs.

“You’re like, ‘Wow! What an athlete.’ I’m not surprised he can do it at the highest level, too,” Wolfe said. “I can just speak to some of the things that I’ve seen him do that are supernatural to me. Why he does that is one thing, the fact he has the ability to do it is another thing. It’s quite remarkable to sit back and watch somebody of that ability.”

Hobbs has downplayed the praise he's received from the Raiders coaching staff, veterans and fellow rookies. Instead, the 22-year-old has remained humble about potentially earning a starting spot by the Sept. 13 regular-season opener against the Baltimore Ravens on “Monday Night Football.”

“It’s just amazing to see the opportunity I’ve gotten, cause a lot of people don’t get this opportunity. I just try to make the most of them,” Hobbs said. “I feel like I’m making the plays and I’m doing what I gotta do, but at the end of the day, I feel like it’s God who has put me in this position. I just try to attack every day and find something I can get better at every day. I’m getting a lot of knowledge for the game. I’m learning a lot.