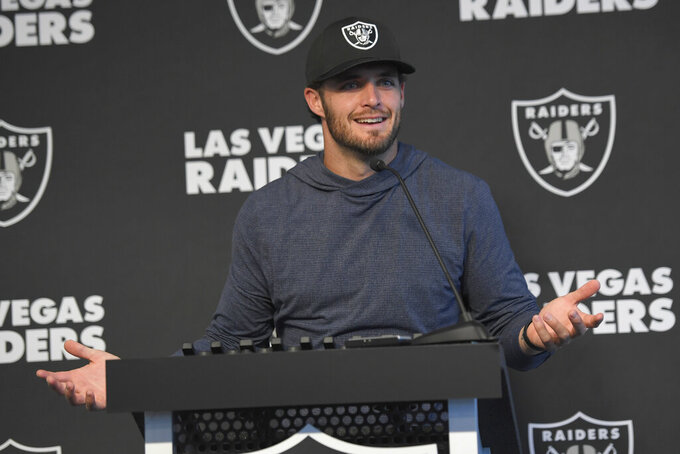 “I was waiting for him to click in the headset and start talking to me. Make a joke, make me laugh, get me going, fire me up.”

But there’s an abrupt new era in Las Vegas, where Jon Gruden is no longer making jokes about anything, and special teams coordinator Rich Bisaccia is now the interim head coach of the Raiders.

“He’s got as much respect in the locker room — in our locker room — as any coach I’ve ever seen in my life,” Raiders general manager Mike Mayock said about Bisaccia at the team’s practice facility on Wednesday.

“Is he a great coach? Hell yeah. But he’s an even better man. And what I’ve always told people when I’ve endorsed him is that he’s the most natural leader of men that I’ve ever been around.”

Bisaccia, now in his 20th season as an NFL coach, steps in for Gruden, who resigned Monday after reports surfaced of emails he sent before being hired in 2018 that contained racist, homophobic and misogynistic comments.

Mayock said he’s endorsed Bissacia for head coaching positions in the past. And that Bissacia will be a natural fit for the Raiders because of the relationships he’s built in all three phases of the team, saying that since Bissacia has been the special teams coach he’s involved with more players on the team than any other coach.

“It’s easy to get emotional ... this is certainly an exciting moment,” said Bisaccia, whose first NFL job was under Gruden in 2002, when he was hired as special teams coordinator for the Tampa Bay Buccaneers.

Both Mayock and Bisaccia said since Monday’s revelations about Gruden rocked not only the Raiders, but the entire NFL, they’ve addressed the locker room, along with owner Mark Davis and the team’s captains.

Davis has declined to speak to reporters, other than a statement that he accepted Gruden’s resignation.

Along with Mayock and Bisaccia, Carr, tight end Darren Waller and defensive end Maxx Crosby spoke to reporters after practice, all with the same thought process: it’s time to move on, bring on the Denver Broncos.

The Raiders and Broncos, who are tied for second in the AFC West just one game back of the Los Angeles Chargers, meet Sunday in Denver.

“We have a good team, we’re a 3-2 team, it’s not like we’re going through some type of bad cycle and all of a sudden there’s been a change and it’s the end of the season and the season’s over,” Bisaccia said. “We’ve got 12 games; we feel like we have a lot of time. We feel like a lot of goals are still in front of us.”

Bisaccia said he doesn’t believe the timing will be an issue because of the coaching staff in place.

Defensive coordinator Gus Bradley and defensive line coach Rod Marinelli both have head coaching experience, as does offensive line coach Tom Cable. Offensive coordinator Greg Olsen takes over play-calling duties, which could see changes in allowing Carr to expand the playbook with a more prominent passing game, rather than Gruden’s run-first scheme to set up the pass.

“I’ve been in this situation, I think this is my fifth head coach in eight years, so I do know the feelings of when it’s a good football team and when it’s not,” Carr said.

“This team, the way we came in today was everything’s still out there for us. We’re a good football team, we believe that. We need to play better, but we still believe we can compete with anybody.

“From an emotional standpoint, I’ve got a job to do. That’s never changed, no matter who the coach is, no matter who’s on the team with me. I have a job to do and that’s to lead these men. Especially now, they need a leader more than ever.”

NOTES: Mayock said DE Carl Nassib, the first openly gay active NFL player, requested a personal day. Mayock said the two have spoken several times and planned on meeting late Wednesday, but that Nassib told him “he’s got a lot to process ... and of course we support that request.” ... DT Johnathan Hankins (hip), DE Yannick Ngakoue (rest/knee) and Waller (rest/knee) were all non participants on Wednesday.