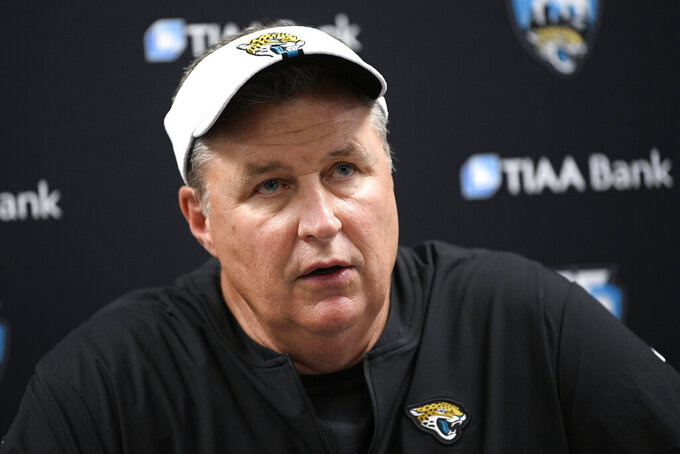 FILE - In this Aug. 8, 2019, file photo, Jacksonville Jaguars head coach Doug Marrone talks to reporters after an NFL football preseason game against the Baltimore Ravens in Baltimore. Jaguars running back Leonard Fournette insists he’s made professional progress. Coach Doug Marrone is hesitant to agree. Marrone says “we are going to see.” This much everyone is certain: Fournette’s performance on and off the field will go a long way toward determining whether the Jaguars remain at the bottom of the AFC South or return to being conference contenders in 2019. (AP Photo/Nick Wass, File)

JACKSONVILLE, Fla. (AP) — The Jacksonville Jaguars will have one less day to prepare for their season opener.

The Jags canceled practice and meetings scheduled for Wednesday because of the threat of Hurricane Dorian, leaving them to cram two days of work into one before hosting the Kansas City Chiefs on Sunday.

Coach Doug Marrone told players and coaches to stay away from the facility Wednesday as the powerful storm is scheduled to make its way up Florida's east coast. Players also are off Tuesday. They are expected to return midday Thursday.

"We'll have our work in," Marrone said. "I'm not concerned about that."

Marrone said the team got "quite a bit" of the game plan for the opener installed last week, making any weather-related adjustments relatively easier.

"Most of the work is done, which not to say, 'If there's ever a good time,'" Marrone said. "But in the beginning you have a chance to have more done than, obviously, if something happened during the middle of a season."

The Jaguars were able to secure a block of hotel rooms for players, coaches, staff and families in case they needed to evacuate. Some coastal areas near Jacksonville already are under mandatory evacuation orders.

Marrone said there have been internal discussions about possibly needing to move practices slated for later in the week out of Jacksonville, but added there are no plans to do so until the hurricane gets closer.

"People who have been through this before know that things can change and you have to be ready," Marrone said. "There's been a lot of discussions about a lot of different things. I think the first thing was, the priority was, to make sure everyone's safe and have a plan, and then once we know that everyone is safe and has a plan of what they're doing. Then I think we'll just take things as they come."

The Jaguars have dealt with hurricanes before. Recently, too.

They were forced to stay two extra nights in Houston following the 2017 season opener because of Hurricane Irma.

Dorian hovered over the Bahamas on Monday, pummeling the islands with sustained winds in excess of 150 mph.

The National Hurricane Center in Miami extended watches and warnings across the Florida and Georgia coasts. Forecasters expected Dorian to stay just off shore, but caution that a small deviation could draw the storm's dangerous core toward land.