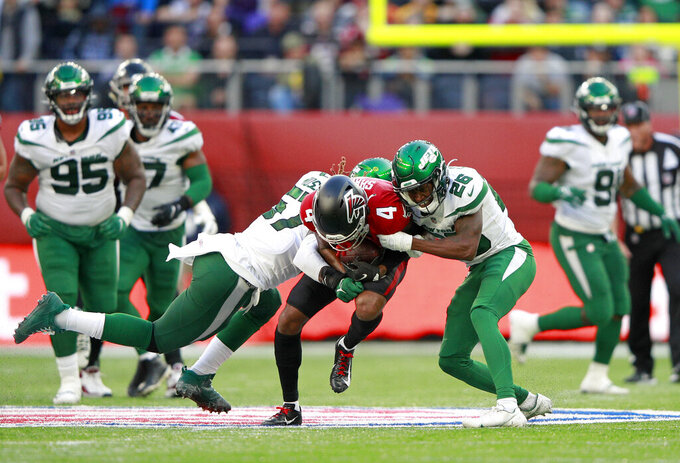 The New York Jets linebacker could be sidelined for the team's game Sunday at New England after he said Wednesday he was hurt on the second-to-last play of New York's 27-20 loss to Atlanta in London on Oct. 10.

Coach Robert Saleh said Mosley and the team remain “hopeful” he'll play. But Mosley didn't participate in practice and will be evaluated each day to determine if he'll be able to play for the 1-4 Jets.

“It's something that if you get back too early or you try to push too fast, it can make things worse,” Mosley said. “So, honestly, it's really just a day-to-day thing. You know, get my rehab in every day and do my workouts with our trainers and everything.”

Mosley is a team captain who leads the Jets with 45 overall tackles after missing most of the past two seasons. A groin/core muscle injury limited him to two games in 2019 in his first season with New York, and Mosley opted out last season because of the coronavirus pandemic.

“He feels good about (playing),” Saleh said. “When it comes to those lower-extremity injuries, you just kind of feel the player out. Each player is different, however it shows up on the MRI.”

While a different injury, Mosley has some experience with coming back too soon. After injuring his groin in the opener of the 2019 season, Mosley sat out four games before returning — and re-injuring himself. He ended up on injured reserve and missed the rest of that season.

“That's definitely something that I look back on,” Mosley said. “If you rush it back too early, you can injure it even more. It's feeling good right now.”

Saleh wouldn't divulge the severity of the hamstring injury when asked what grade of strain Mosley has. Mosley said his status for the game could come down to how he feels during pregame warmups Sunday morning.

“He feels confident,” Saleh said. “He said he has dealt with these before and we're 10 days out now, so we'll see how the week goes.”

If Mosley can't play, the Jets will be a bit short-handed at the middle linebacker spot.

Rookie Jamien Sherwood would likely take over Mosley's role as the Mike linebacker who relays plays to the defense. Quincy Williams, a waiver claim from Jacksonville, has been a pleasant surprise while ranking second on the team with 31 tackles. The Jets also have Blake Cashman on the active roster, and linebacker Noah Dawkins on the practice squad. New York protected Dawkins on the practice squad this week to assure he wouldn't be signed by another team.

“We're fine at the linebacker spot with a lot of guys who have been getting a lot of playing time,” Saleh insisted.

In other injuries, safety Marcus Maye practiced on a limited basis and is expected to play this week after missing two games with an ankle injury.

Tight end Tyler Kroft, who missed the game at London, sat out with a back injury. He previously appeared on the injury report with a rib ailment.

“I give him credit,” Saleh said. “It's not easy what he's going through.”