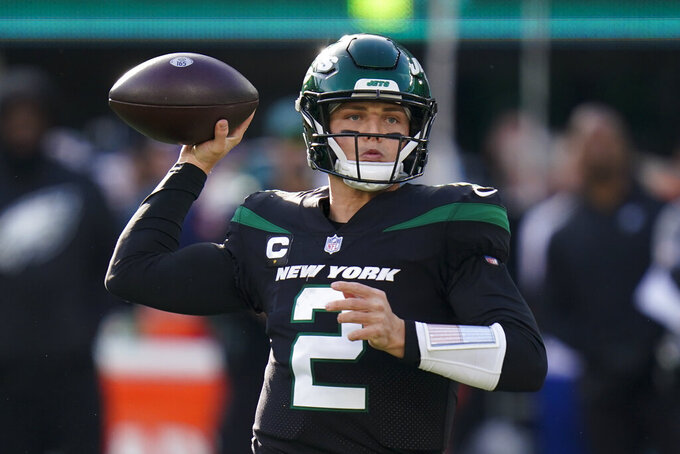 So any talk of that so-called “wall” many first-year players hit right about now is a non-factor, as far as the New York Jets quarterback is concerned.

“I think the cool thing about my situation is I’m kind of looking at this like this is my second year,” Wilson said Thursday. “You know, kind of like I already played a first season — I took some games off because of injury and now I feel that excitement, the energy to want to play and finish this season.”

The No. 2 overall pick started the first six games before missing the next four with a sprained ligament in his right knee.

Wilson spent that time better absorbing the offense, watching as Mike White, Josh Johnson and Joe Flacco took turns running things with an efficiency that had been lacking with the rookie under center. Wilson also dived deeper into his own film, seeing the things he was doing wrong — and right — and focusing on being better when he got back.

Since returning, Wilson is feeling a lot different from the guy who was in the huddle at the beginning of the season.

“I feel like I learned so many things and then I worked to improve on them, and now I get to show them in the games,” he said. “And so now I feel like I’m two games into a new season. The last five, I've got to take very seriously as far as just working to improve every single day.”

Wilson was up and down in his first game back, going 14 of 24 for 145 yards and an interception while adding a touchdown run in a 21-14 victory at Houston. Last Sunday, he was more efficient — particularly in the first half — and finished 23 of 38 for 226 yards and two TDs with an interception. Wilson also ran for a score for the second straight game.

“I know you guys don’t love hearing this, but he did have his best week of practice going into last week,” offensive coordinator Mike LaFleur said. “What I mean by that was his tempo, his eyes, his command — I thought he really slowed himself down.”

At times during Wilson's first six starts, it appeared he was trying to do too much as he played from behind or the plays broke down quickly around him. That was something LaFleur and his staff focused on with Wilson over the past several weeks, and they used the film from his performance against the Texans to tighten up a few things.

They noticed Wilson was a little too fast in and out of his drops, causing him to be slightly ahead of plays. That was throwing off the tempo, something that was mostly on point last Sunday against the Eagles.

"I thought his calmness and command early on was probably the best it’s been all year,” LaFleur said.

Wilson agreed, saying he felt he was being decisive and getting the ball out of his hands quickly.

“Probably just the most comfortable I’ve ever been from an offensive standpoint of just understanding my job, what I’m looking for, my goal of what I’m supposed to be trying to accomplish every play,” Wilson said. “I think it’s easier when you feel like you have that down and you can just take more control of it.”

Wilson led the Jets to touchdowns on each of their first three drives last Sunday. The offense went three-and-out in the third quarter and then New York's defense couldn't get off the field — allowing Philadelphia's offense to chew up all but 70 seconds of the period.

That got Wilson and the offense out of rhythm. Otherwise, coach Robert Saleh thought the rookie was well on his way to having an “explosive” performance. As it is, Wilson was still selected the NFL's rookie of the week — the second time he has gotten the award and the only quarterback this season.

“I feel like it was, just the first half, I finally got to play football this year and actually feel like we were doing something on offense,” Wilson said. “And I was getting things going and I was feeling comfortable with what we were doing on offense and things were just rolling.”

The 22-year-old quarterback likes to think of himself as a patient person. He came to the Jets amid high expectations, but knows the results he, the team and the fans crave might not come immediately.

“I understand it’s going to be a challenge being a rookie and everything, but I understand that it’s a process,” Wilson said. "And as long as I’m making growth and heading in the right direction, I can just keep working at it. It’s the process right now rather than the end result.

“We’re working through something bigger than just this right now.”