John Elway: Russell Wilson is 'the piece that we needed' 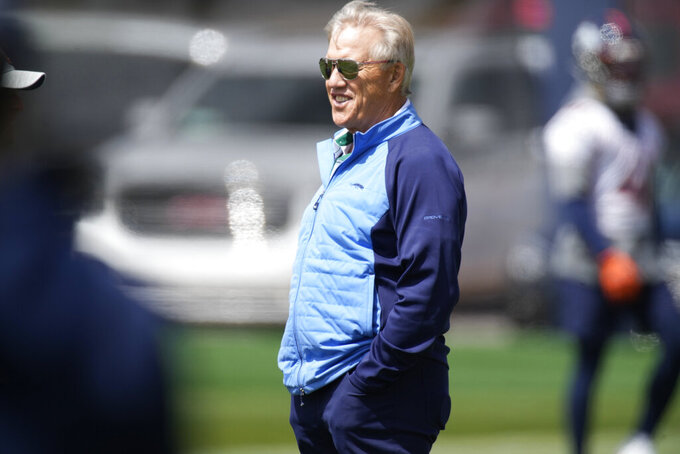 CASTLE ROCK, Colo. (AP) — After the Denver Broncos were rendered spectators on the first night of the NFL draft last month, John Elway said he turned to his successor George Paton and told him, “great first-round pick!"

As in 10-year veteran QB Russell Wilson, whom Paton acquired from the Seahawks in exchange for Denver's first- and second-round picks this year and next along with three veteran players.

Elway, who transitioned into an outside consultant role to Paton after his contract as the Broncos' president of football operations expired earlier this year, praised his handpicked successor's shrewdness in acquiring Wilson.

“We're excited that he's in town, there's no question. He's kind of the piece that we needed,” Elway said Wednesday following a news conference announcing the 2024 BMW Championship golf tournament would be played at Castle Pines Golf Course, where he's a board member.

Wilson, Elway said, has "a good football team around him. George did a tremendous job of putting that deal together and getting him up here. So, it's great to see that fan base energized again, and we've got a chance to compete in that AFC West, which is obviously going to be tough.”

Elway, who won two Super Bowls as a player and another as a front-office executive in Denver, never was able to find a suitable successor to Peyton Manning.

He said he's thrilled the Broncos look like they'll be competitive again with Wilson under center.

“Like any year, we've got to stay healthy, and we've had a tough time doing that the last several years,” Elway said. “So, if we can stay healthy, Russell's been there, he's won Super Bowls. He knows what it takes and the leadership that he's providing is tremendous.”

Elway compared the effect of Wilson's arrival to that of Manning's in 2012 when No. 18 made all other players accountable and led them to two Super Bowls in four years.

“It makes it tough, and the thing is they're young, too, which makes it even tougher," Elway said. "But it'll make it exciting for the fans here in Denver and hopefully we can figure out how to make it to the top of the AFC West.”

Elway said Oklahoma linebacker Nik Bonitto was a steal at No. 64 in the draft and that he should contribute right away along with UCLA tight end Greg Dulcich, the 80th overall selection.

Elway has been splitting his time between Southern California, where he's building a new home, and Denver. He said he's enjoying spending more time with his grandkids but wants to stay involved with the Broncos once the Bowlen family sells the franchise this summer.

Five finalists are in the process of touring the team's headquarters and stadium and going over the books ahead of a sale that's expected to top $4 billion, a record for a sports franchise.

Elway said he'll reach out to the winning bidder and offer to help the new owners in any way he can, such as navigating relationships with the city and the NFL.