Judon focused on being himself heading into Year 2 with Pats 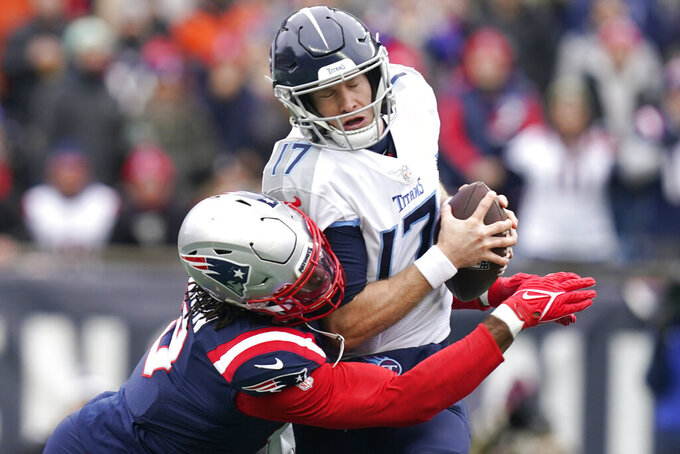 FILE - Tennessee Titans quarterback Ryan Tannehill (17) is sacked by New England Patriots outside linebacker Matt Judon, left, during the first half of an NFL football game Nov. 28, 2021, in Foxborough, Mass. Judon won over his Patriots teammates and fanbase last season with his outsized personality and ability to cause disruption for opposing quarterbacks. (AP Photo/Steven Senne, File)

That’s because during his six NFL seasons, the 6-foot-3, 275-pound linebacker’s outsized personality and the trademark red sleeves he wears under his jersey, have stood out as much as his ability to cause disruption for opposing quarterbacks.

It made Judon an instant fan favorite in New England after he left Baltimore in free agency last offseason and signed a four-year $56 million deal with the Patriots. He gave his new team plenty of return on that investment, appearing in all 17 games in 2021 and amassing a career-high 12 1/2 sacks.

So, when he was absent for the Patriots’ final two workouts to cap their second week of training camp last week, it got attention.

But back on the field Monday and practicing without restriction, Judon said it won’t disrupt what so far has been a productive start to his second year in Foxborough. He even doubled down on his sleeves, wearing a thick, red hooded sweatshirt under his pads on an afternoon in which the temperature soared into the mid-90s.

“I’m just making it harder on myself, just trying to sweat, get all the bad stuff out,” Judon said. “I’d seen (former Ravens linebacker) Terrell Suggs wear a sweatshirt every day in camp. No matter the degrees, no matter the temperature. So, every day I’m out here, I’m trying to sweat it out.”

As unbearable as that might sound, it ties in with an offseason that in part Judon spent taking time to get more comfortable living in Massachusetts.

Gone now are the days when he had to use GPS for simple adventures such as finding a grocery store or restaurant.

“It’s the same thing in the (Patriots facility),” Judon said. “I know how to navigate it without asking people for help.”

It’s helped him return feeling a lot more mentally at ease and ready to attack the preseason.

Judon is again being called on to be one of the anchors of a defense looking for fast improvements after ranking in the bottom third of the NFL against the run.

Coach Bill Belichick said one thing that continues to stick out about Judon is that he remains “anxious to learn” as the team adjusts to tweaks on that side of the ball.

Judon said that mindset is something he’s clinging to heading into this season.

While several of those teammates say they look to him for leadership, he said he’s still following the lead of several Patriots with longer tenures with the team, including fellow linebacker Ja’Whaun Bentley and defensive lineman Lawrence Guy.

But he’s also trading notes with younger players such as linebackers Anfernee Jennings and Josh Uche, whose lockers are adjacent to his.

“That makes us all better, because we all see the game differently,” Judon said. “We might get the same block or the same thing. And then we get different stuff because we’re different rushers. … And I’ve just played a little more football than those guys on a different team and different system.

“I think they’re taking that, especially with what the coaches are teaching them and it’s transitioning out here.”

Judon said it’s added anticipation for the Patriots’ first look at another team when they host the New York Giants Thursday in both teams’ preseason opener.

“It’s always good to go against a different team,” he said. “We’ve been out here grinding — hot days, dog days, all that. ... When we go against somebody else, we can measure it up.”