Kenny Pickett will be Steelers' starting QB vs. Bills 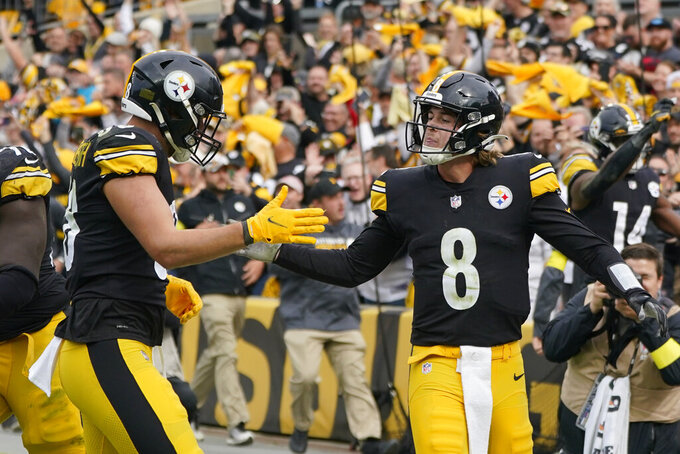 Pittsburgh Steelers quarterback Kenny Pickett (8) is congratulated by tight end Pat Freiermuth (88) after diving cross the goal to score against the New York Jets during the second half of an NFL football game, Sunday, Oct. 2, 2022, in Pittsburgh. (AP Photo/Gene J. Puskar)

PITTSBURGH (AP) — Mike Tomlin never had a definitive timeline on when to hand the keys to the Pittsburgh Steelers' offense to Kenny Pickett.

If anything, Tomlin wanted to delay a move that seemed inevitable from the moment the Steelers drafted Pickett with the 20th overall pick six months ago. Asked as recently as a week ago how he would know it's time, Tomlin shrugged and said simply “you just kind of know when you're there.”

The Steelers, off to a 1-3 start heading into the most daunting stretch of their season, are there.

The Pickett era is officially underway in Pittsburgh. No turning back now. The rookie quarterback will make his first start on Sunday when the Steelers visit Buffalo (3-1), a decision Tomlin made because he feels it gives his team its best chance to win, not only this weekend but down the road.

“He's a young guy, he's going to grow throughout this process,” Tomlin said Tuesday. “But make no mistake about it, we're not grading him on a curve. He's not grading himself on a curve. There's an expectation of quality play and playing to win.”

Tangible qualities Pickett showed in abundance while playing next door at the University of Pittsburgh, where he morphed from a three-star prospect when he arrived in January 2017 to a Heisman Trophy finalist last fall.

Tomlin watched Pickett's development casually over the years, his interest piquing after Pickett spent 2021 re-writing most of the Pitt record book while leading the Panthers to the ACC title.

Pickett carries himself with a swagger that's greater than the sum of his parts, the NFL prospect who spent months listening to draftniks openly wonder about the size of his hands now finds himself tasked with carrying the considerable baggage that comes when you're the heir apparent to a likely Hall of Famer in Ben Roethlisberger.

It's a glare Tomlin believes Pickett is ready to handle.

“Kenny has shown us maturity at every point throughout this process,” Tomlin said, pointing out that at age 24 Pickett is older than most NFL rookies.

“The things that we valued in him from a draft perspective: fluid and quick decision-making, pro-like anticipation and things of that nature have proven to be true.”

Pickett showed flashes during the second half on Sunday against the Jets, becoming the first rookie quarterback in NFL history to run for two touchdowns in his debut. There were also mistakes, namely an ill-advised heave toward the sideline late in the fourth quarter that smacked off the hands of tight end Pat Freiermuth and into the awaiting arms of Jets safety Michael Carter II that set up New York's game-winning touchdown drive.

Tomlin was quick to not place full blame for the switch at the feet of Mitch Trubisky, who found only sporadic success in three-plus games after being tabbed as the starter at the end of training camp.

“Oftentimes a quarterback position gets too much credit and too much blame," Tomlin said. “We haven’t moved the ball fluidly enough to our liking. We hadn’t put enough points on the board. The quarterback is a component of that, but not the only component. We’ve all got to absorb the responsibility that comes with what we are.”

Trubisky, signed to a two-year deal in March and selected as a co-captain on the eve of the season, will serve as Pickett's backup. Tomlin described Trubisky as “disappointed” in the demotion, which is a full-circle moment of sorts for the second overall pick in the 2017 draft by the Chicago Bears.

Trubisky sat behind Mike Glennon during the first month of his rookie season. With the Bears off to a 1-3 start and Glennon struggling, Chicago turned to Trubisky, who held onto the job for three-plus seasons and helped the Bears to a pair of playoff berths.

That success, however, did not lead to any sort of security for Trubisky, who was cut after the 2020 season and spent last year as Josh Allen's backup in Buffalo.

The Steelers are hoping for a relationship with Pickett more akin to what they had with Roethlisberger, who retired in January after 18 seasons that included two Super Bowl wins and an appearance in a third.

That's the long-term goal. The shorter-term goal is finding a way to navigate a four-game stretch against teams with a current combined record of 12-4. It would be a challenge for any quarterback, let alone one who has taken all of 31 snaps as a professional.

Yet less than two weeks after saying “definitively no” when asked if he was considering a switch from Trubisky to Pickett, Tomlin is even more resolute in his commitment to Pickett as the Steelers embrace a future that arrived maybe earlier than even Tomlin expected.

“When we make decisions, man, we don’t anticipate blowing in the wind,” Tomlin said. “That’s not how we are. ... We’re optimistic and thoughtful in our thought process. We believe in Kenny.”