The Latest: Grandmother of Baylor star Ursin dies from virus 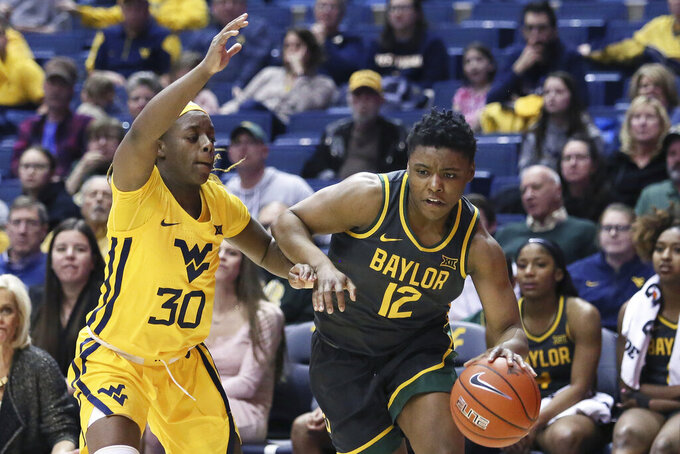 The grandmother of Baylor junior guard Moon Ursin has died in the New Orleans area after being infected with the coronavirus.

Lady Bears coach Kim Mulkey, selected Saturday as part of the 2020 class for the Naismith Memorial Basketball Hall of Fame, said she has been in contact with Ursin and her family since getting a call from the player’s mother.

“You comfort through a phone as best you can,” said Mulkey, also a Louisiana native. “We’re humans. In Louisiana, we’re touchy-feely people, and we want to hug ... and we can’t do that.”

Ruby Alexander, 79, died Tuesday night. The Baylor guard was the youngest of her nine grandchildren. Mulkey said Alexander, who she described as “vivacious”, spent weeks at a time in Waco and attended many Baylor games.

The defending national champion Lady Bears were expected to be a No. 1 seed in the Women’s NCAA Tournament before it was canceled because of the coronavirus pandemic. This year’s Final Four was supposed to be this weekend in New Orleans, less than 25 miles from Destrehan High School, where Ursin became the only Louisiana player to be Gatorade Player of the Year three times.

President Donald Trump is reassuring Little League baseball players that they should be playing the game again soon.

“To all of our youth who are missing the start of their @LittleLeague seasons, hang in there! We will get you back out on the fields, and know that you will be playing baseball soon,” he tweeted Saturday. “We will get through this together, and bats will be swinging before you know it. In the meantime, take care of mom and dad, and know that this will not be forever!”

Little League president and CEO Stephen Keener reassured that the players would be back soon. Little League, like the major leagues, has suspended activities until mid-May, when the situation will be assessed, according to the Little League website.

The Little League website said officials “will continue to consult with appropriate medical advisors, government health officials and our volunteer leaders around the world, and we are committed to doing the best we can for the safety and well-being of our players, families, volunteers, and fans.”

Houston Astros ace Justin Verlander says he will donate his weekly paycheck during the coronavirus shutdown to organizations that are helping with relief efforts.

Verlander and wife Kate Upton made the announcement Saturday in an Instagram post. The couple said it would pick an organization each week and highlight its work.

The payments were part of a recent agreement between Major League Baseball and the players’ union on how to proceed during the stoppage.

Potters Corner held on in a computer-simulated race to win the Virtual Grand National.

The real Grand National Steeplechase, one of the iconic sporting events in Britain, was canceled on March 16 following the stringent measures put in place during the coronavirus pandemic.

The 18-1 Potters Corner, trained by Christian Williams with teenager Jack Tudor onboard, withstood the challenge of runner-up Walk In The Mill and third-place Any Second Now.

Favorite Tiger Roll, who would have been chasing a third straight win in the real race, was fourth in the event broadcast on British television.

The White House says President Donald Trump spoke with commissioners of the country’s sports leagues on Saturday and told them he recognizes “the good work being done by many teams and players” to care for their communities and fans dealing with the new coronavirus.

The virus has decimated the sports world with the NBA and NHL suspending their seasons indefinitely and Major League Baseball postponing the start of its season.

The NCAA basketball tournament was also canceled, as were college spring sports such as baseball and softball, lacrosse and track and field.

The White House says the commissioners thanked Trump for his “national leadership and for his interest in the sports industry.” He called on them to continue efforts to support their fellow Americans during the current challenge.

Stephen Kenny is the new Ireland soccer manager after replacing Mick McCarthy in a planned move brought forward by the coronavirus pandemic.

“The Football Association of Ireland announces that Mick McCarthy is to be succeeded as national team manager by Stephen Kenny with immediate effect,” the FAI said in a statement. “The handover has been agreed with both men in light of the delay to the European Championship playoffs caused by the COVID-19 pandemic.”

McCarthy had originally been due to stay in charge until July 31, after the Euro 2020 finals — now put back a year — were originally due to finish. Kenny had been set to take over on Aug. 1 after being in charge of the under-21 national side.

Ireland faces Slovakia away in the Euro 2020 qualifying playoffs, with the winner to face either Northern Ireland or Bosnia and Herzegovina. However, the fixture has been postponed for a second time due to the pandemic.

Tajikistan has started a new soccer season, joining a small group of countries around the world where play has continued despite the coronavirus pandemic.

The game was played without fans and a large banner reading “stop coronavirus” in Tajik and Russian covered part of the stands.

Players and staff from both teams mingled freely after the final whistle before officials hung medals around their necks and shook their hands.

Professional soccer is only continuing in a few countries around the world, with Belarus, Nicaragua and Burundi among the holdouts, attracting interest from foreign fans and international gambling markets.

Tajikistan has not reported any cases of the new coronavirus, according to a tally by Johns Hopkins University.