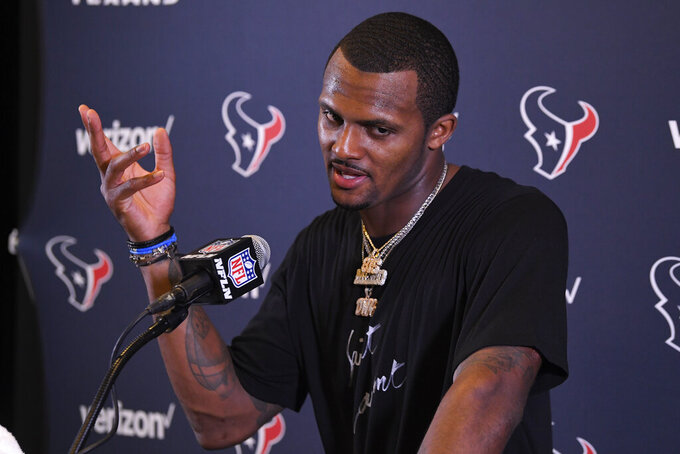 HOUSTON (AP) — Thirty women who had accused the Houston Texans of turning a blind eye to allegations that their former star quarterback Deshaun Watson was sexually assaulting and harassing women during massage sessions have settled their legal claims against the team, their attorney said Friday.

The terms of the settlements between each of the women and the Texans are confidential, said attorney Tony Buzbee.

While only one of the women had filed a lawsuit against the team, the others intended to make legal claims against the Texans before the settlements were reached, Buzbee said.

In separate lawsuits, 24 women accused Watson of exposing himself, touching them with his penis or kissing them against their will during massage appointments while he played for the Texans. One woman alleged Watson forced her to perform oral sex. Last month, Buzbee announced 20 of those 24 lawsuits have been settled.

In a statement, Texans owners Janice McNair and Hannah and Cal McNair said while the team did not have any knowledge of Watson’s alleged misconduct, they were “shocked and deeply saddened” when they first learned about the accusations and chose to resolve the claims against the team “amicably.”

“This is not an admission of any wrongdoing, but instead a clear stand against any form of sexual assault and misconduct. We hope that today’s resolution will provide some form of closure to the parties involved, our fans and the Houston community at large. As an organization, we will now turn our focus to the future and doing what we can to ensure respect for all,” the McNairs said in their statement.

In the lawsuit filed last month against the Texans, a woman accused the team and some of its employees of having been told or being aware of Watson’s troubling behavior and “known tendency to push boundaries during massage sessions.” The lawsuit alleged the Texans provided Watson with various resources, including rooms at a Houston hotel, massage tables and a nondisclosure agreement the women were told to sign, that allowed the quarterback “to further his misconduct with women.”

Watson, who agreed to be traded to the Cleveland Browns in March after four seasons with Houston, has claimed his innocence and that any sex with the therapists was consensual. The 26-year-old is facing possible discipline from the NFL over the allegations.

Watson, who signed a five-year, $230 million contract with the Browns, is waiting to see if he’ll be eligible to play this season. NFL disciplinary officer Sue L. Robinson will decide whether the three-time Pro Bowler violated the league’s personal conduct policy with his off-field behavior.

A former federal judge in Delaware, Robinson held a hearing last month during which the league and the NFL Players Association presented arguments. The league has insisted on an indefinite suspension for Watson while the union says there are no grounds for a lengthy ban since he did not commit any crimes.

This is the first case for Robinson, who was jointly appointed by the league and union to handle discipline. She has been reviewing post-hearing briefs from both sides.

The Browns, who traded three first-round picks to Houston and six total for Watson, are eager to know how long they could be without their starting quarterback. The team opens training camp July 25.

Buzbee said he hopes to take to trial the four remaining lawsuits against Watson sometime next spring.