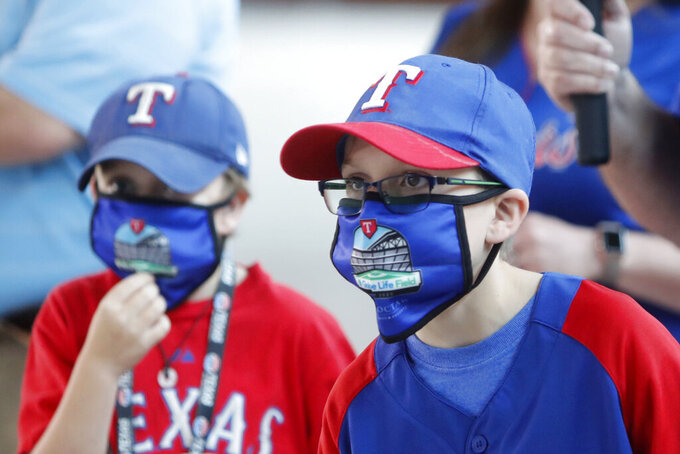 FILE - In this June 1, 2020, file photo, Gavin Bollmer, left, and his buddy, Austin LaFountain, wear Globe Life Field masks as they tour the home of the Texas Rangers baseball team in Arlington, Texas. Many organizations are trying to bridge the budget gap from the coronovirus through enhanced sponsorship sales, such as temporary billboards that could be stretched over unsold sections of seats. Teams and leagues are selling branded face masks and other personal protective equipment. Almost all of them are trying to engage fans in new and creative ways. It won't come close to making up the budget shortfall, but the hope is to survive long enough for sports to return to normal. (AP Photo/LM Otero, File)

Sporting Kansas City had just packed Children's Mercy Park to the brim for a 4-0 blowout of the Houston Dynamo when the coronavirus pandemic brought not just the Major League Soccer season but the entire sporting world to a standstill.

Suddenly, what looked like such a dream start for the club — on the pitch and off — had the makings of a nightmare.

Many professional sports league, such as the NFL and European soccer leagues, have lucrative television contracts and big-money corporate sponsors that fill their substantial coffers. But the domestic soccer league in the U.S. still relies heavily on ticket sales, merchandising and concessions, much like many university athletic departments.

Without games, their very ability to make ends meet would stretch the abilities of even the savviest of accountants.

“The economic impact is significant, borderline catastrophic, and not just for us,” said Sporting KC President Jake Reid, whose club returned to full team training Monday. “If you cut off revenue streams and we still have the expenses of running buildings and paying players and staff, it's a challenge.”

It is also but one example of the financial impact felt by the sports world from the coronavirus pandemic.

Most teams and leagues are reticent to discuss the fallout, but during a conference call with players, NBA Commissioner Adam Silver said 40% of league revenue comes from ticket sales and in-arena purchases. So while the NBA has joined the NHL and MLS in crafting return-to-play plans, they are designed with safety in mind and that means centralized games away from their home stadiums.

The financial impact of that decision is no small one: The NBA makes about $1.2 million in gate revenue for each regular-season game played with fans, and there were 259 games remaining when the season was suspended.

“There's a loss that's going to take place industry-wise. It's simply unavoidable,” said Marc Ganis, the co-founder of Chicago-based consulting firm SportsCorp. “If they can come back, they can reduce the loss for the players, the coaches, the people who work the ticket booths. The ushers, the security people, the parking lot attendants and concessionaires. All of these people — thousands for a football game or baseball game. These are the people that need money, who need to work.”

It takes about 3,000 workers to make U.S. Bank Stadium in Minneapolis hum for a Vikings game. And even when they go back to work, the cost of ensuring they are safe — and keeping patrons safe, however many that may be — will grow by a significant amount.

ASM Global, the stadium's operator, already has announced new guidelines for its approximately 325 facilities around the world. They include the way food is prepared and presented, the way crowds are filtered through gates and concourses, and even the way stadiums must be cleaned between events.

Then there are the new innovations that are helping to ensure they are safe, apps and other technology that monitor crowd density and wait lines at restrooms and concessions, high-efficiency air circulation systems and touchless payment methods.

It all costs money to implement. MLS acknowledges that most of its clubs do not turn a profit, and many baseball clubs struggle to make ends meet. Forty two of the 130 schools playing the highest level of college football had expenses exceed revenues last season, according to the Knight Commission database that tracks such spending.

The potential of games played this fall with reduced crowds or no fans at all, coupled with new expenses in making a facility go, are a big reason why four-year colleges have been forced to cut approximately 100 programs entirely.

Many organizations are trying to bridge the budget gap through enhanced sponsorship sales, such as temporary billboards that could be stretched over unsold sections of seats. Teams and leagues are selling branded face masks and other personal protective equipment. Almost all of them are trying to engage fans in new ways.

It won't come close to making up the budget shortfall, but the hope is to survive long enough for sports to return to normal.

“I think everybody who is in it for the long-term will think long term,” said Eric Grubman, a former NFL vice president for business operations who now runs a hospitality company. “They know know that there's going to be life on the other side, so you have to keep playing, and you've got to find a way to do it safely. When it comes to the revenue shortfall and expenses going up, the players and the owners really are all in this together.”