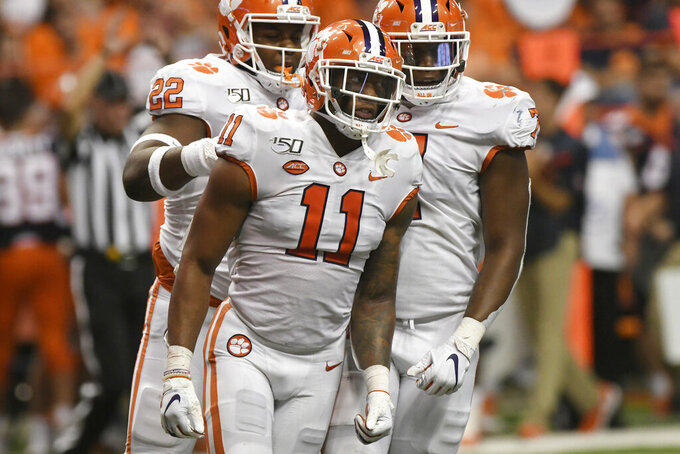 FILE - In this Sept. 14, 2019, file photo, Clemson's Isaiah Simmons celebrates a sack against Syracuse during an NCAA college football game in Syracuse, N.Y. Detroit Lions general manager Bob Quinn sounds very interested in Simmons, adding NFL teams will have a lot of conversations internally about whether he projects to be a linebacker, a safety or a hybrid. (AP Photo/Steve Jacobs, File)

The Detroit Lions should have an opportunity to turn a weakness into a strength in the NFL draft.

If Detroit chooses to keep the No. 3 pick overall, cornerback Jeff Okudah is expected to be available. The Ohio State star appears worth being the highest-drafted player at his position since Shawn Springs was selected from the same school two-plus decades ago.

The Lions were last in the league against the pass last season. Their chances to give up more big plays through the air seemed to increase by trading three-time Pro Bowl cornerback Darius Slay to Philadelphia for draft picks.

Detroit did attempt to fill the void at cornerback by signing Desmond Trufant, who turns 30 in September, after Atlanta released him last month. The team, coming off a three-win season, also improved depth at the position by adding Darryl Roberts and Tony McRae in free agency.

Assuming Cincinnati drafts Joe Burrow and Washington selects Chase Young as expected, Okudah will be there for Detroit.

The Lions' leaders need production this year more than potential to help them keep their jobs in 2021.

Team owner Martha Firestone Ford decided late last season general manager Bob Quinn would be back for a fifth year and coach Matt Patricia would get a third year, but made it clear contending for the playoffs was an expectation.

Detroit's best shot to make the playoffs for the first time since 2016 is to keep Matthew Stafford healthy. The 32-year-old Stafford, who has three years left on his $135 million contract, missed the second half of last season with a back injury to trigger a nine-game losing streak, and showed how valuable he is to the franchise.

It is perhaps too risky for the Lions' embattled general manager and coach to draft Tagovailoa, coming off hip surgery. And with solid linebackers in place, Simmons does not seem as as safe a pick as Okudah.

Quinn, though, may decide he doesn't want to make Okudah the first cornerback drafted No. 3 overall since Springs was in 1997 or to take Simmons. He will likely have a chance to trade down slightly to get additional draft picks.

“We’re just trying to make our team better,” Quinn said. “Everything’s kind of on the table."

Quinn sounds very interested in Simmons, adding NFL teams will have a lot of conversations internally about whether he projects to linebacker, a safety or a hybrid. The 6-foot-4, 238-pound Simmons played linebacker, covered the slot and the deep middle for the Tigers.

“His ability just to make plays in both the run and pass game was really intriguing," Quinn said.

THE CASE FOR TUA

Quinn insists he will make decisions in the best interest of the Lions, even if a move for the long term doesn't help his job security in 2020. Tagovailoa showed he's capable of being a star when he was healthy for the Crimson Tide.

The Lions will have opportunities to add potential starters on the second night of the draft, holding the No. 35 pick along with early and late slots in the third round. They may want to bolster both lines with two of those three selections. A guard drafted on the second day could replace Graham Glasgow, who the Lions let leave in free agency, and he signed a $44 million, four-year deal with the Denver Broncos.

Detroit's receiving corps is an asset with Kenny Golladay, Marvin Jones and Danny Amendola. However, each player is entering the last season of his deal. The receiving crop is the strongest in this draft.

Detroit enters the draft with nine picks, including an additional selection in both the third and fifth rounds from the Slay trade.