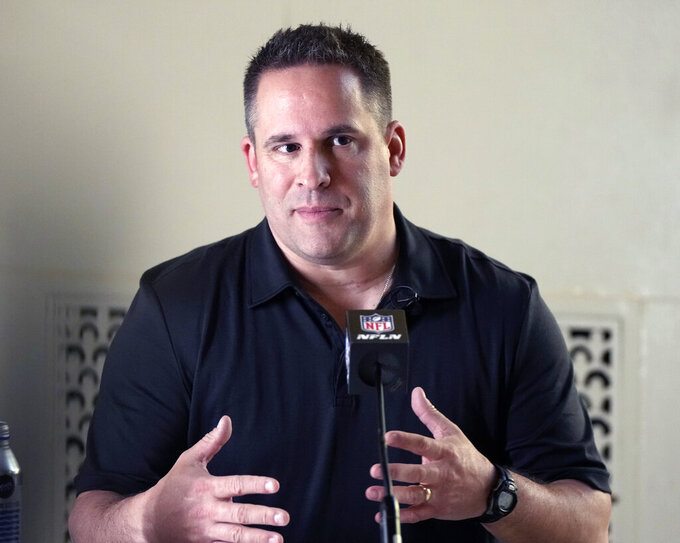 FILE - Las Vegas Raiders head coach Josh McDaniels speaks to journalists at a coaches media availability during the NFL owners meeting March 28, 2022, at The Breakers resort in Palm Beach, Fla. McDaniels said the Raiders are trying to build around quarterback Derek Carr and are looking for the “sweet spot” in finding an acceptable contract extension that won't hampering the franchise in the future. (AP Photo/Rebecca Blackwell, File)

Coach Josh McDaniels said the Las Vegas Raiders are trying to build around quarterback Derek Carr and are looking for the “sweet spot” in finding an acceptable contract extension that won't hamper the franchise in the future.

Carr is entering the final season of a $125 million, five-year extension that was the richest in the NFL at the time he signed it in 2017 but now is well below the going rate for veteran starting quarterbacks.

McDaniels said Carr is a fit for what he is trying to build in Las Vegas and he looks forward to growing their relationship into a long-term one.

"When we get into those conversations with Derek, Derek is going to have to make decisions about what’s best for him. That’s what each man’s right is, and they should do that for their families. At the same time, we’ve got to try to do what’s right for the team, and there will be a sweet spot in there hopefully for everybody, and we’ll be excited to go forward like that.”

Carr, who turned 31 on Monday, has topped 4,000 yards passing the last four seasons and made progress in being more aggressive pushing the ball downfield. But he has also been turnover-prone the past two years and ineffective in the red zone.

The Raiders hope McDaniels can address those flaws in his first year as head coach and that it will lead to more success for the team. The Raiders made the playoffs last season for just the second time in Carr's eight years as starter and haven't won a playoff game since the 2002 season.

The Raiders made a big addition this offseason by trading for Carr's former college teammate Davante Adams, giving the team the top-flight outside receiver that had been missing in recent years.

It was an aggressive move that indicated McDaniels is not interested in a long-term rebuild after taking over the team in January.

“If you’re not trying to win, I don’t know what you’re doing at this point,” he said. “I think we are all in that mode of trying to do what’s best for our football team so we can compete and win as many games as possible. That’s what they pay us to do."

McDaniels touched on several other topics in his first media availability since the start of free agency.

“It just seems like, you wake up and every other day there’s something exciting happening in the AFC West,” McDaniels said. “I think it’s great. I think it’s great for football. I know we’re super excited to have the opportunity to compete in this division.”

— One area the Raiders haven't addressed is the offensive line, which was a weakness last season. Las Vegas brought back Brandon Parker and Jermaine Eluemunor and are hoping for big strides from last year's top pick Alex Leatherwood.

“Our job is now going to be to work like hell to improve the guys we have,” McDaniels said “The guys we have on the roster right now are competitive and we’re going to try to coach them and improve them, and that’s our job. If we can’t make the players on our team better, then we got to do something different.”

— McDaniels said GM Dave Ziegler has been in contact with free agent cornerback Stephon Gilmore but signing the former Patriots star is still a long shot.

— The Raiders did add another former star Patriots defender, signing pass rusher Chandler Jones to a three-year, $51 million contract. McDaniels called the 32-year-old Jones a unique rusher with the ability to play both sides on the edge, as well as inside at times.

"I know he’s into his 30s, but I see Chandler as a guy that is still playing at a really high level and he’s playing at that level on all three downs, which I love,” McDaniels said.