Morris says his interview for Falcons job already under way 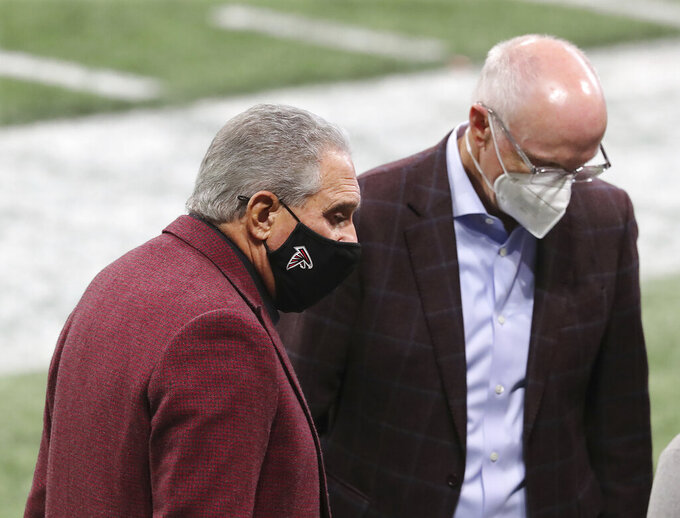 Atlanta Falcons owner Arthur Blank, left, and President and CEO Rich McKay confer on the sideline before the team plays the Tampa Bay Buccaneers in an NFL football game on Sunday, Dec. 20, 2020, in Atlanta. (Curtis Compton/Atlanta Journal-Constitution via AP)

ATLANTA (AP) — Raheem Morris knows he will be among the candidates interviewed following the season as the Atlanta Falcons seek their coach for 2021 and beyond.

As far as Morris is concerned, that interview process began as soon as he was made the interim coach when Dan Quinn was fired following the team's 0-5 start. Morris has had regular conversations with Falcons President Rich McKay and team owner Arthur Blank the last two months. Morris says each conversation stands as part of his interview.

Morris said his dealings with media, helping to navigate the team through the coronavirus pandemic, and his meetings with players and assistant coaches are his body of work for McKay and Blank to consider.

The record and management's possible desire for a fresh start could work against Morris in the search. Morris could be helped by support from his players, including quarterback Matt Ryan, who said Morris “has done a great job” in his transition from defensive coordinator.

The Falcons fired general manager Thomas Dimitroff with Quinn. The team announced last week virtual interviews had been conducted with former Houston Texans GM Rick Smith and Atlanta's director of college scouting, Anthony Robinson, as they ramped up the search for Dimitroff's replacement.

It's possible the team could allow a new GM to lead or participate in the coaching search.

Morris, 44, was 17-31 in three seasons as Tampa Bay's coach from 2009-11. He has coached on offense and defense in his six seasons in Atlanta. His move from wide receivers coach to secondary coach midway through last season was seen as a key to a strong finish in a 7-9 season.

The Falcons already are assured of their most losses since at least 2014. This is Atlanta's third straight losing season, prompting speculation the team could be bound for a rebuild, including coaches and players.

Ryan says Morris "is going to be a really good head coach in this league, whether it’s here or somewhere else in the future.”

McKay told The Atlanta Journal-Constitution on Tuesday that Morris has “earned that right” to be interviewed.

Morris said the confirmation he'll be included in the interview process “means a lot.”

“When those situations come you’ve got to be ready and prepared to talk about your plan and what’s going to happen and what you’d like to get accomplished,” Morris said.