Mr. Smith goes to Washington, takes another team to playoffs 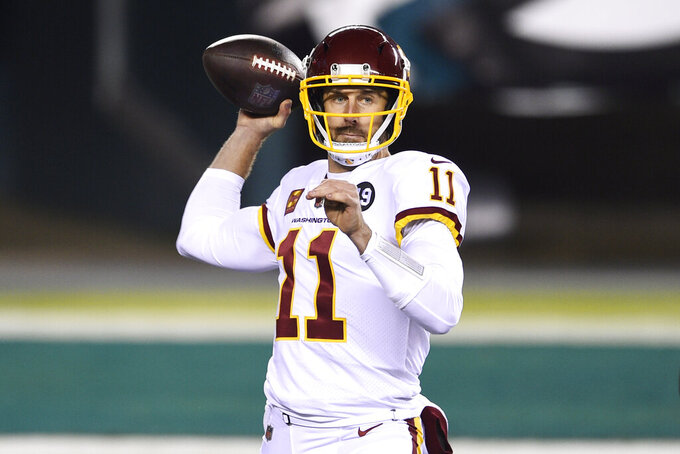 Washington Football Team's Alex Smith plays during the first half of an NFL football game against the Philadelphia Eagles, Sunday, Jan. 3, 2021, in Philadelphia. (AP Photo/Derik Hamilton) 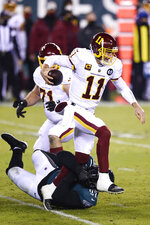 If the Alex Smith story becomes a movie, Alex Smith doesn't want to see it.

Smith is living it and already documented the long journey back from breaking his right leg and needing 17 surgeries to rehab. As inspiring as it is to teammates and coaches, his story on the field this season has little to do with the 2018 injury that looked career-threatening at the time and is more about Smith leading Washington from 2-7 to NFC East champion as a veteran quarterback who has been there before.

“Once you are out there and the whistle blows, this is a result-oriented game and you really have to be accountable to your teammates, to the coaches, to everybody in this building that’s depending on you,” Smith said. "At the end of the day once you step on that field, you better be able to hold up your end.”

Smith has done that and more, proving coach Ron Rivera right that the offense worked better with an experienced hand at the wheel. Five touchdowns and five interceptions in six starts don't stand out as glimmering numbers, but the 5-1 record has everything to do with the 36-year-old managing the offense in a way 2019 first-round pick Dwayne Haskins never could.

Haskins lost five of his six starts and has since been released, Kyle Allen won one of his before getting hurt and now this is Smith's team — even if the limitations from a strained right calf in his surgically repaired leg force Rivera to rotate backup Taylor Heinicke in at times Saturday night against the Tampa Bay Buccaneers. Rivera said, “It’s something we most certainly have to look at,” but the Buccaneers are zeroing in on Smith.

“When Alex Smith plays quarterback, they’re a heck of a football team,” Tampa Bay coach Bruce Arians said. "They’re an extremely well-coached team, a ton of talent on that defensive front, but Alex Smith is really the key to everything.”

Smith isn't immune to mistakes. He just knows when he can afford to take a risk.

“He finds a way to move the team down the field,” Taylor said. “He’s always been a quarterback that has a really high football IQ.”

It's night and day for Washington's offense from Haskins to Smith. Rookie running back Antonio Gibson said, “Having a vet at the quarterback position changes dramatically” because Smith's presence relaxes everyone else in the huddle.

“It’s a different feeling when he’s back there,” receiver Steven Sims said. “Everything about him is professional. It’s everything you want in a quarterback.”

He also wins. Smith is just the fifth quarterback in NFL history to lead three different teams to the playoffs after doing so for San Francisco and Kansas City.

Rivera is quick to point to Washington's five-game winning streak with Smith as the starter, and that reputation has followed him for years.

“You talk about a proven winner, he’s the epitome of that,” Pederson said. “What he’s overcome in his career on and off the football field and what he’s come through and to see him out there playing now, I’ve been so happy for him.”

Smith brushes off the narrative now as the most impressive comeback in football, if not all of sports. Since the summer, he hit the milestones of being cleared to practice, making the roster, playing in another NFL game, starting for the first time since 2018 and winning again — and shied away from the spotlight.

“One thing I could say about Alex is he never makes it about him,” receiver Terry McLaurin said. “He has every reason to kind of (say), ‘Look at my comeback story, look what I’ve done,’ but he makes it about the team. He’s always trying to figure out ways you can make it easier on us as receivers, make it easy on the whole offense and play complementary football.”

Complementary football got Washington into the playoffs for the first time in five seasons, which is why the previous regime traded for and signed Smith to a $94 million extension a couple of years ago. His experience has been worth every penny this season.

"Certainly, I think when you are older and have been in some of these situations, there’s a comfort level that maybe you do have that you don’t realize," Smith said. “For me, it’s all about being able to go out there and help us win football games.”