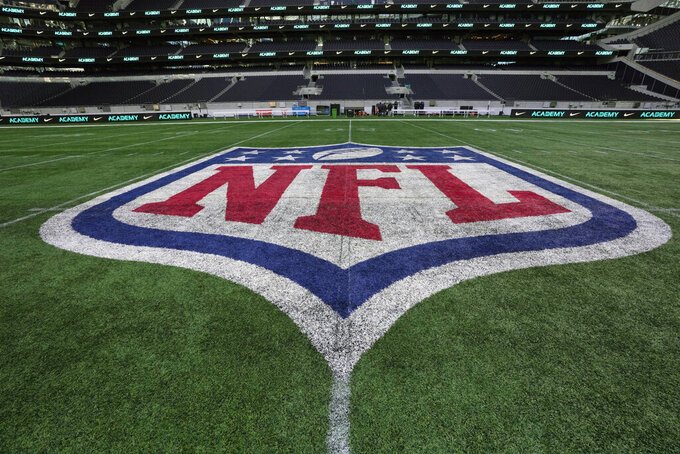 The NFL logo is seen on the pitch ahead of an NFL Academy training session at Tottenham Hotspur's White Hart Lane stadium in London, Wednesday, Oct. 13, 2021. The NFL is playing two regular season games in London during October, the Jets verses the Falcon's and the Dolphins against the Jaguars. The NFL Academy is aimed at pre college youngsters to give them a chance show off their talents in a days events. (AP Photo/Alastair Grant)

LONDON (AP) — The NFL Academy in London has top coaching and state-of-the-art facilities to help young prospects improve in American football. But it's been missing one key component: games.

The academy is part of the NFL's initiative to establish a year-round presence in London and grow the sport's popularity, in a model the league hopes to replicate in Germany when it brings regular-season games there.

More than 80 teenagers, mostly from Britain, study, train and practice in hopes of landing a scholarship to play for a college in the United States. It launched two years ago.

“Because of COVID, we haven’t had the chance to play anybody,” coach Tony Allen said last week during a practice session at Tottenham Hotspur Stadium, which hosted NFL games the past two Sundays.

That's scheduled to change Saturday when the academy finally gets to play a real game. They'll face a freshman squad from the University of East Anglia. Along with the pandemic, finding opponents with players the same age has been a challenge.

More games are planned against other university teams, academies in France and Sweden, as well as some European national teams.

Game film is important for student-athletes hoping to switch to an American high school or land a college scholarship, although a few academy players have been able to make the jump without games.

Academy officials have also realized that to improve the kids' chances, they'll need to bring them to college campuses themselves. Some well-documented tours of college football summer camps by private recruiting companies have proven successful.

“In the future and as early as next summer we’ll do those sorts of tours because actually what you need to do with these guys, if they’re good enough, is they need that exposure out in the U.S.,” said Seni Majekodunmi, head of NFL Academy relations. “Colleges need to see them, coaches need to see them.”

Europe has become a reliable source of Division I recruits and increasingly for schools from the Power Five conferences.

“Coaches want to see those guys compete against American kids,” Collier said. “I know for sure there is a lot of talent that’s coming through (the academy). It’s like how anything works, it’s kind of who you know and the exposure. You need the trust of the college coaches."

Even without the games, a lot of players “love the NFL brand and rightfully so,” Collier said. “It’s the most powerful football brand in the world.”

Indeed, the NFL was able to send Hall of Fame receiver Jerry Rice to the opening of the academy's gym. And practice sessions on an NFL field, like at Tottenham, aren't bad, either.

Majekodunmi cautioned that it's not just about football. Two players whose grades were slipping weren't allowed to attend the Tottenham training session.

“It’s not all about trying to get these guys to the NFL. Education reigns supreme,” he said. “The number of kids who are going to make it out of this group is going to be really slim so they need to have that plan B.”

The NFL partnered with Barnet and Southgate College, located near Tottenham in north London. Besides the core subjects, students also learn about character development, leadership and financial literacy.

The academy casts a wide net for applicants, using Twitter to urge rugby and basketball players and sprinters to try out.

“We try to get them as young as possible but they’re very green,” said Allen, the coach.

A few, however, are elite. Linebacker/defensive end Darren Agu switched from the academy to a Georgia high school before landing more than 30 scholarship offers. The 6-foot-6, 225-pound London native ultimately chose Vanderbilt over the likes of Alabama and Notre Dame.

Academy tight end Peter Clarke has picked up one offer so far, from Texas-San Antonio. The 17-year-old junior is just above 6-foot-5 and 235 pounds. He commutes 90 minutes from south London to school via bus and two changes on the Underground.

“I devote everything I have to the game because this is my chance to not only play football at the next level but also get a university education,” he said. “I’m one of first people in my family that will ever be able to go to university, so it’s a big thing for me.”