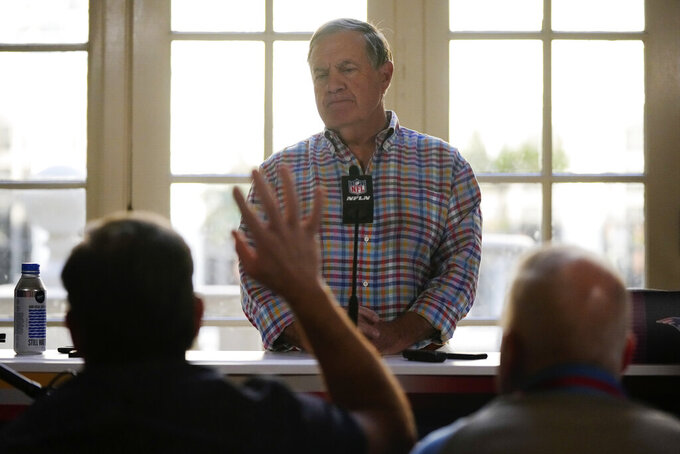 PALM BEACH, Fla. (AP) — To ensure more opportunities for diverse candidates, the NFL has added requirements on the hiring of offensive assistant coaches, and women in general.

The moves announced Monday at the owners meeting include adjustments to the Rooney Rule adopted in 2003 and amended frequently in attempts to enhance opportunities for people of color and women for nearly all league and team jobs.

Beginning this season, all 32 clubs must employ a female or a member of an ethnic or racial minority to serve as an offensive assistant coach. The person will receive a one-year contract and work closely with the head coach and offensive staff to gain experience.

In recent years, head coaches have predominantly had offensive backgrounds. The pipeline for minorities on that side of the ball is lacking, as Steelers owner Art Rooney II reiterated Monday.

“We recognize we have seen progress on some fronts,” said Rooney, chairman of the league's Diversity, Equity & Inclusion Committee, “but we still have a way to go on other fronts.”

The NFL saw an increase in the number of people of color in all coaching positions from 35% in the 2020 season to 39% last season. There was an all-time high increase in defensive coordinators to 15, up by two; an increase in minority GMs (five to seven), and assistant GMs (three to six).

Teams will receive league funding toward the coach’s salary for up to two years.

Overall, including women in all Rooney Rule requirements is designed to address under-representation of women in key football positions. The league believes this will “encourage the further identification and development of women candidates and the ability to provide them additional opportunity to interview for open positions.”

A total of 12 women coaches at the start of the 2021 season was an all-time high.

Dasha Smith, the NFL's chief administrative officer and one of the league's highest-ranking females, noted that for the first time, a woman was interviewed for a general manager's position this year.

Smith also said that virtual interviews will no longer be acceptable for head coach and general manager positions, and there will be specific requirements for candidates to become offensive assistants. Those would include at least three years of experience on the college or pro level.

There currently are five minority head coaches in the NFL. There are seven Black general managers.

The league also released a resolution to increase diversity ownership of franchises, and created a diversity advisory committee that includes Peter Harvey, a former attorney general of New Jersey; Rick Smith, a former general manager of the Houston Texans; and Don Thompson, former president and CEO of McDonald’s Corporation.

Early Monday, Mike Tomlin said he did not hire Brian Flores as an assistant coach with the Pittsburgh Steelers out of sympathy for the former Miami Dolphins head coach.

Tomlin, who like Flores is African American, did so because Flores is “a good coach.” That Flores had sued the NFL and three teams — the Dolphins, Giants and Broncos — claiming racist hiring practices, did not dissuade the long-time Steelers coach in any way, Tomlin said.

A member of the league’s powerful competition committee and one of the most influential coaches in the sport, Tomlin spoke strongly about the lack of minority head coaches in the NFL. He, Houston’s Lovie Smith, Miami’s Mike McDaniel, who is biracial, the Jets’ Robert Saleh and the Commanders’ Ron Rivera are the five minority head coaches among the 32 teams. About 70% of the players are Black.

“I haven’t been in any discussions and no, I don’t have a level of confidence that would lead me to believe that things are going to be better,” Tomlin said. ”I’m more of a show me guy as opposed to a guy that sits around and talks about things.

“I think that we’ve pecked around the entire discussion and subject and we’ve done a lot of beneficial things,” Tomlin added of adjustments to the Rooney Rule adopted in 2003 to enhance job opportunities for minorities. “But we’ve got to land the plane. We’ve got to hire capable candidates.”

That, in Tomlin’s estimation and actions, includes Flores, whose lawsuit has been a major topic this offseason. Flores was fired by the Dolphins despite helping turn around a floundering franchise in his three seasons as coach, going 19-14 the last two years.

Flores cites a string of text messages with Patriots coach Bill Belichick three days before his scheduled Giants interview for the head coaching position. Those texts led Flores to believe Brian Daboll already had been chosen as the new coach.

Belichick refused comment on the lawsuit and any role he might have had. Giants owner John Mara said Sunday he is not interested in any settlement with Flores and “I think the truth will come out. The allegations are false.”

— A former Super Bowl coach is returning to the league. The Indianapolis Colts hired John Fox as a senior defensive assistant. Fox led Carolina and Denver to conference championships before losing in Super Bowls.

“This was a role I really wanted to add,’’ Colts coach Frank Reich said. Fox will work with new defensive coordinator Gus Bradley.

“A great complement to Gus,’’ Reich said of Fox. “Our goal with John coming in, not for him to bring his system to us but for him to come in and learn our system and contribute some of his experience. How it can fit.”

— The NFL awarded the 2024 draft to Detroit on Monday. The city was a finalist for the 2022 event, which will be hosted next month in Las Vegas after the 2020 draft, originally planned for Las Vegas, was held virtually during the COVID-19 pandemic.

“We think we really proved to the league we would put on a great show,” said Lions president Rod Wood, “and how important it is to our city and to our fans.”