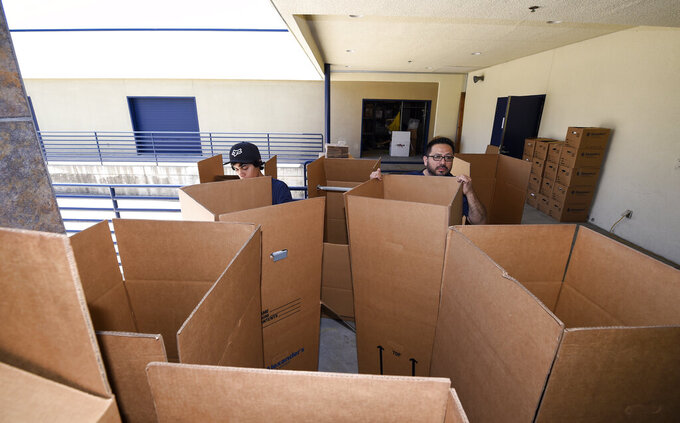 FILE - Movers sorts boxes for packing at the Los Angeles Chargers' facility after NFL football minicamp, Thursday, June 15, 2017, in San Diego. Finding a home on and off the field can be an overwhelming chore for many NFL players. Especially in a topsy-turvy league where job security is far from guaranteed. (AP Photo/Denis Poroy, File)

NEW YORK (AP) — New playbooks, teammates and coaches are the focus during the day. Buying air mattresses, scanning house listings and securing short-term leases are tasks to tackle the rest of the time.

Finding a home — on and off the field — can be an overwhelming chore for many NFL players. Especially in a topsy-turvy league where job security is far from guaranteed.

Dealing with realtors, lawyers, mortgage brokers and closings in a new city is stressful enough. For NFL players, juggling the uncertainty of their job situation makes it even more nerve-wracking.

“It’s definitely about exhausting the connections you have because it’s obviously a life stressor, finding somewhere to live,” said Tomlinson, who was drafted by Detroit in 2015, traded to San Francisco two years later and signed with New York last March.

“As a young player, I believe that’s part of the distraction,” Tomlinson added. "You have to deal with that and then you have to come to work. So the sooner you can handle stuff like that, the better.”

Jets linebacker Quincy Williams was cut by Jacksonville last summer and claimed on waivers 24 hours later by New York. So he packed everything he owned — shirts, pants, jackets and shoes — into his car, and had his car shipped north.

“It was crazy,” Williams said. “Moving, especially in the middle of the season, you don’t really have a lot of time to find a spot or visit a lot of places."

Fortunately for Williams, his brother Quinnen was now his teammate with the Jets. So he stayed in one of Quinnen's spare rooms for a few months until he found an apartment close to the team's facility in Florham Park, New Jersey.

And he still had a lease on the five-bedroom house he was renting in Jacksonville — and continued to pay about $3,000 a month for seven months until he could terminate it.

Not every player is as fortunate as Williams to have a brother playing on the same team. Or be in as manageable a financial situation.

NFL teams put players up in hotels during mandatory minicamp in the spring and training camp in the summer. But accommodations during voluntary workouts are on the players. As part of the league's collective bargaining agreement, players were paid $295 this offseason for each day they participated in workouts, up to $1,180 per week.

During training camp, players receive per-diems: $1,700 for first-year players and $2,900 for returning players.

In the regular season, finding a place to live is left to the players.

“You've still got to figure that out on your own," said Tennessee wide receiver Nick Westbrook-Ikhine, who joined the Titans in 2020 as an undrafted free agent out of Indiana. "It’s part of adulthood and coming of age.”

For undrafted rookies and players on the roster bubble, it's tough to settle on a place until you know you've made the team. That's when the real search begins, with flexible leases — maybe three or six months — on apartments a popular option.

“It’s definitely a stressful thing, a stressful situation just because you don’t know what could happen, what’s going on," said rookie linebacker David Anenih, who was on Tennessee's practice squad — and in a flexible lease — when he was interviewed for this story but has since been signed to Pittsburgh's active roster.

Not every NFL rookie has to go searching for a place to live.

Browns cornerback Martin Emerson Jr. was approached by his new landlord, former Cleveland safety Damarious Randall, who bought a property while playing for the team in 2018-19 and had been renting it out.

“He had talked to some other guys on the team and wanted to see if they wanted to stay there," said Emerson, drafted in the third round out of Mississippi State. "He told me he wanted somebody responsible and that he knows aren’t going to party and mess the house up.”

Randall is retired from playing and living in Las Vegas.

“He doesn’t check in with me,” Emerson said. “But I have to send him a check.”

And once a player finds a place to live, filling it with furniture can take some time.

“All I have is really like a chair, an air mattress and all my stuff,” said Green Bay wide receiver Samori Toure, a rookie seventh-round pick from Nebraska. “It's a nice air mattress.”

But some players completely avoid the headaches of a home search.

“When I was in Indy, I was just in a hotel the whole time,” said Seattle safety Josh Jones, who played for the Colts most of last season. “They were like, it’s going to be a certain amount every week and I was like, OK, I’m going to stay here.

"I just had that feeling I wasn’t going to be there for a long time — and just to not put myself in that predicament of having a place and having to move all that stuff.”

“Grown men don’t want to have roommates like they’re still in college,” said Detroit defensive back A.J. Parker, who's on the Lions' practice squad.

Players with families have other aspects to consider that younger, single teammates might not.

Jets left tackle George Fant said school systems were the determining factor for where he, his wife Chastity and their three children found a home in New Jersey after he signed in 2020.

Lions linebacker Alex Anzalone rents a town house — in which he, his wife Lindsey and their son Cooper live — that’s a 20-minute drive from the team’s facility.

“We travel as a pack,” Anzalone said. “Some people do the long-distance thing. My son is 19 months old, so he’s changing every week and I don’t want to miss it.”

Minnesota long snapper Andrew DePaola broke into the NFL in 2014 with Tampa Bay. When kicker Connor Barth was cut at the end of training camp that year, DePaola moved into Barth’s home temporarily. He slept on the couch cushions in the otherwise empty house for a few weeks until the sale closed and he had to be out for good.

DePaola bounced around with the Bears, Raiders and Panthers before joining the Vikings during the 2020 season. He has gotten married during that time, and he and his wife have two young kids.

“We’d love to be able to stay here,” said DePaola, who still keeps an offseason house in his home state of Maryland.

Because packing those boxes and suitcases again could always be the next play.

“No matter what my housing situation is," Toure said, "I’ve got to make sure I play football first and perform when I’m in the building.”