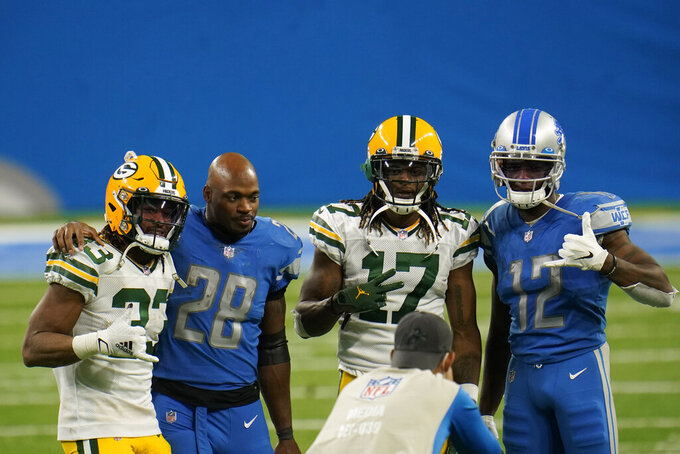 Green Bay Packers wide receiver Davante Adams has produced a touchdown catch in each of his past eight games.

However Adams says he isn’t thinking much about how long he can keep that streak going.

He has long-range goals in mind instead.

“At the end of the day, I want to be great and I want this team to be great,” Adams said Wednesday. “The awards or minor achievements along the way, the weekly things, hearing stuff like that makes me feel good obviously but that ain’t what drives me. What drives me is getting the Super Bowl and ultimately trying to be the best receiver to play this game.”

Adams just might be the best receiver playing right now.

Even though he missed two games with a hamstring injury earlier this season, Adams has 14 touchdown catches to tie Kansas City’s Tyreek Hill for the NFL lead. He ranks fourth in the league in catches (91) and sixth in yards receiving (1,144), but leads the NFL in both categories on a per-game basis.

“He’s one of those transcendent, generational-type players, that it doesn’t matter the era or the offense,” Packers quarterback Aaron Rodgers said. “He could be productive in any of those decades or any of those offenses.”

Adams already has shattered a Packers record that lasted nearly seven decades. Hall of Famer Don Hutson had a pair of seven-game streaks with touchdown catches during the early 1940s.

“I think about scoring touchdowns a lot,” Adams said. “I definitely think about that. But records, I let those come. I let Tom (Packers communication manager Tom Fanning) text me or catch me after the game and let me know if anything interesting has happened. I tend to just think about the touchdowns themselves, score and then go from there on all that stuff.”

Since the start of the 2016 season, Adams has caught 54 touchdown passes, the most of any NFL player during that stretch. But this still represents a breakthrough season of sorts for the 2014 second-round pick from Fresno State.

Adams had only one 1,000-yard season before this year, though he finished two years with 997. One of those 997-yard seasons came last season, when he missed four games with turf toe and caught just five touchdown passes.

Adams has spoken on multiple occasions this year about how he has tried to adopt Kobe Bryant’s mentality and approach.

He paid tribute to Bryant during a touchdown celebration at last season’s Pro Bowl, which took place the day the former NBA star died.

“If you go out and practice super hard and then you go play in the game, it’s going to be a lot more natural for you,” Adams said. “You’ll be able to catch the ball and think fast and start making plays, making people miss and turning it into the next phase of the play rather than just catching the ball and being surprised and happy that you caught the ball.

“Those type of habits and that type of lifestyle that you build up and become accustomed to, it just becomes second nature. It’s been something that I’ve admired from him forever, so just trying to allow that to continue to live on.”

He also would like to emulate the postseason success of Bryant, who played on five NBA championship teams. Adams has never played in a Super Bowl, but has Green Bay on pace to earn the No. 1 seed in the NFC playoffs.

Adams is focusing more on securing that top seed and having the career longevity of someone such as Arizona's Larry Fitzgerald than wondering how long his current touchdown streak might continue.

“It’s pretty awesome, obviously, but I want the all-time records,” Adams said. “That’s what my mind’s set on. When we look back, when we have a Fitz-like career as far as duration, hopefully I can look back and say we got a lot of boxes checked with a couple Super Bowls to add to that. That’s where my mind is.”