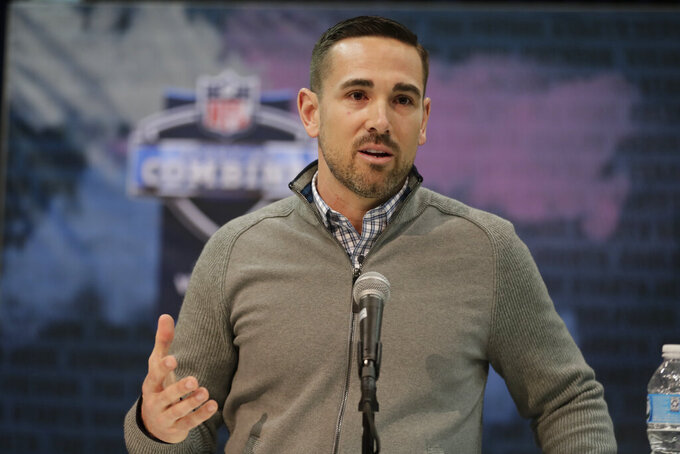 INDIANAPOLIS (AP) — Green Bay Packers quarterback Aaron Rodgers endured perhaps the most challenging year of his career — a season marked by a knee injury, inconsistent play and the firing of coach Mike McCarthy.

Enter new coach Matt LaFleur, who would rather look ahead to building a relationship with Rodgers than look back to find out what went wrong.

"He's had a hell of a career up to this point," LaFleur said at the NFL combine on Wednesday. "For me, it's just about what can we do moving forward. I know this: When I talk to him, the guy wants to win. I think he's at the point of his career where he's starting to think about his legacy and what he's going to leave. The only way you can do that is you better win a world championship. That's the goal. We're always going to strive for that.

"I think that's where he's at in his career."

Rodgers won his lone Super Bowl in 2010. He won MVP awards in 2011 and 2014 and led the Packers to NFC championship games in 2014 and 2016. The second world championship, however, has remained elusive.

To get the Packers back to the playoffs - they've missed out the last two seasons after qualifying the previous eight years - let alone win a championship, LaFleur wants to take some of the pressure off Rodgers. That means a balanced offense, particularly on first and second down. Green Bay operated the most pass-heavy attack in the league last season.

LaFleur hopes to change the equation.

"That's philosophically what I believe is best to keep a defense off-balance, and it makes the quarterback's job a heck of a lot easier, it takes hits off the quarterbacks," LaFleur said. "I think all these guys kind of have a shelf life and there's only 'X' amount of hits in a guy's body. So how can we extend our quarterback's career as long as possible? And I think the way you do that is make a commitment to the running game and kind of build your offense through your running game?"

The Packers arrived at the combine armed with a pair of first-round picks — Nos. 12 and 30 — and six choices in the first four rounds. They have plenty of needs, with outside linebacker, safety and guard among them. Finding an immediate starter at tight end, however, might not be necessary, with general manager Brian Gutekunst indicating veteran Jimmy Graham will return for a second season.

Graham finished second on the team with 55 receptions for 636 yards, though he scored only two touchdowns. He played the last quarter of the season with a broken thumb. The 32-year-old has a salary-cap charge of $12.667 million for 2019, which includes a $5 million roster bonus due next month. Gutekunst could release Graham and create about $5.333 million of cap space but that's apparently not the plan.

"Jimmy had a productive year for us last year," Gutekunst said. "Was really, really proud of him. He fought through a lot of things just to be out there. Guys who have played as long as he has don't have to do that. His professionalism was on display each and every day, and I look forward to seeing what he can do for us this year."

The futures of free-agent receiver Randall Cobb, free-agent linebacker Clay Matthews and veteran linebacker Nick Perry have not been determined, Gutekunst said. They were three of the highest-paid players on the team last season but they all underperformed.

"As we get all the information together as we approach the next few weeks, we'll kind of have a better idea for all that," Gutekunst said.