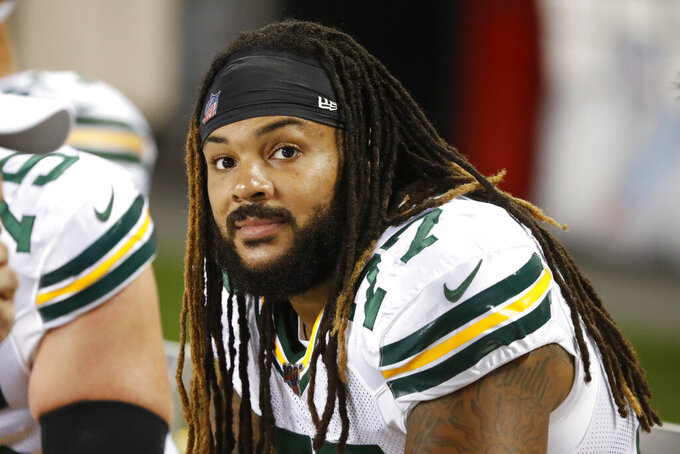 Jones spoke during a radio interview this week about how during a 2017 game he and his players knelt before the anthem but then stood during the anthem. Jones added that he “thought that was good” and “that’s the kind of thing we’ll be looking to see if we can implement.”

“That’s not what protesting is about,” Turner said Friday. “Protesting (during) the national anthem is to get a point across that society and everyone watching football games every Sunday has a chance to see so you get your point across. The idea of protesting is to make people that are higher up — like our President — notice what we are doing. We understand that he doesn’t like that. Why do you think we continue to protest? Because nothing has changed.”

The Packers returned to the field Friday, one day after canceling practice along with eight other NFL teams to discuss social justice issues following the police shooting of Jacob Blake, a 29-year-old Black man.

The shooting occurred Sunday in Kenosha, Wisconsin, about 150 miles south of Green Bay. An attorney for the family has said Blake is paralyzed.

Turner said the Packers spent part of Thursday discussing what they could do as a team and speaking with team CEO Mark Murphy, general manager Brian Gutekunst and executive vice president Russ Ball. Turner said it would be important for players to hear from every owner.

“We would love for all 32 NFL owners to get out there and make meaningful statements, to speak from the heart about what they truly believe,” said Turner, who plays both guard and tackle. “Whether they believe the hype or they don’t believe the hype, at least we’d know where they stand.”

Turner said plenty of ideas on how to protest during the season have been mentioned. But when the idea of boycotting games was brought up during a Zoom session Friday, he expressed skepticism.

“You know, everything has been thrown out there, as far as what to do, how to protest, how to make change,” Turner said. “Yeah, we can go out there and boycott football games. Sure, we can do that. That’s easy. What change is that going to bring initially and right away? Football fans across the country and the world (ticked) off because they can’t watch football. What is that negativity going to bring to the world because we’re not out there playing this game?”

Also on Thursday, Packers safety Adrian Amos and linebacker Christian Kirksey criticized a comment made by Kenosha police chief Daniel Miskinis after two people were shot to death Tuesday during protests that followed the shooting of Blake.

Miskinis said that if people hadn’t been violating Kenosha’s curfew order, “perhaps the situation that unfolded would not have happened." Kirskey tweeted out a video clip of Miskinis’ news conference and added that “you’re a part of the problem. Point, blank, period.” Amos tweeted that “people like this in positions of power are a problem.”

Asked about the tweet Friday, Kirksey said he considered Miskinis’ comments a “slap in the face.” Amos offered a similar opinion.

“Two people died, and you're focusing on whether people were out past curfew,” Amos said. “I just feel as though there was another way to handle that.”