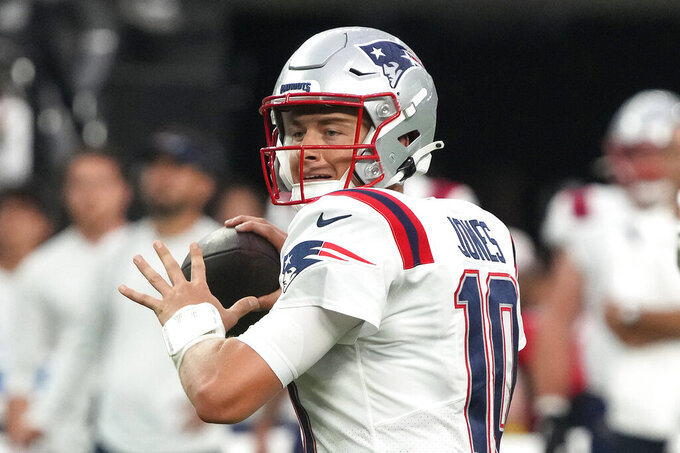 FILE - New England Patriots quarterback Mac Jones (10) throws against the Las Vegas Raiders during the first half of an NFL preseason football game, Friday, Aug. 26, 2022, in Las Vegas. Tua Tagovailoa and Mac Jones will be forever linked by their time as Alabama teammates. Now, for the second consecutive year, they'll meet in Week 1 of the NFL season. (AP Photo/Rick Scuteri, File)

FOXBOROUGH, Mass. (AP) — Patriots quarterback Mac Jones returned to practice a day after sitting out with an illness, putting him on track to start New England's game with Pittsburgh on Sunday.

Jones hasn't missed a regular-season start since being drafted No. 15 overall in 2021.

He was a full participant for Wednesday’s practice after suffering a back injury during the Patriots' season-opening loss at Miami. His absence on Thursday marked the first time he had missed a regular-season practice.

Jones said Wednesday that his back was feeling good and he expected to play against Pittsburgh.

If he can't play in Sunday’s game, backup Brian Hoyer would be in line to make his first start since Week 4 of the 2020 season. Cam Newton missed that game against the Chiefs with COVID-19. Kansas City beat the Patriots’ 25-10.