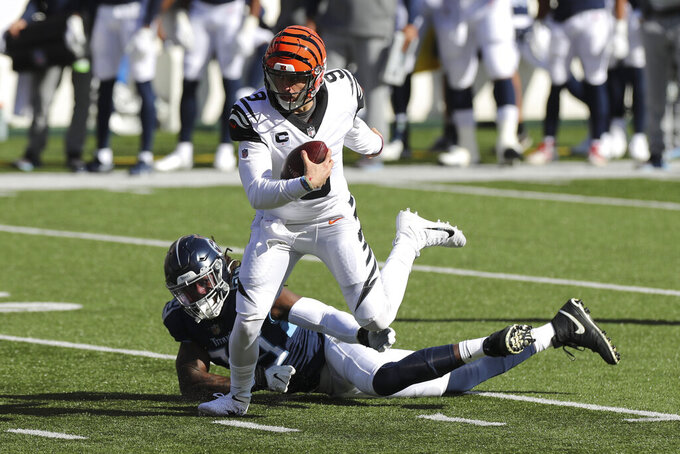 Cincinnati Bengals quarterback Joe Burrow (9) runs out of the tackle of Tennessee Titans' Jadeveon Clowney (99) during the first half of an NFL football game, Sunday, Nov. 1, 2020, in Cincinnati. (AP Photo/Jay LaPrete)

PITTSBURGH (AP) — Cam Heyward can't figure out how the math works. The Pittsburgh Steelers keep winning games. And yet the veteran defensive tackle keeps hearing noise about how unimpressively the NFL's last unbeaten team is doing it.

“They hate us because they ain't us,” Heyward said with more than a hint of dismissiveness. "If it doesn’t look pretty, who cares? We’re 8-0. It’s our job to keep stepping up week in and week out and we hold ourselves to a higher standard than everybody else. For all the guys looking, and saying ‘It’s got to look like this,’ one thing I can say is the Super Bowl winner hasn’t been determined.”

No, but the Steelers have forcefully inserted themselves into the conversation by seemingly finding a different way to win each week. Some weeks, the defense is dominant. Others, the offense bails them out. Sometimes, the opponent self-destructs.

While the Steelers are confident Roethlisberger and Williams can play despite spending the week away from the team's training facility, they're also well aware uncertainty is just one COVID-19 test away.

“Just stay light on your feet,” Heyward said. “I knew every team would be affected by this. I didn’t know how. We’re all adapting.”

The Bengals, meanwhile, are evolving under second-year coach Zac Taylor and rookie quarterback Joe Burrow. Cincinnati is coming off an impressive 31-20 victory over the Titans two weeks ago, their best all-around performance during Taylor's tenure. And while there's a chance Pittsburgh might be short-handed, it typically hasn't mattered who's in uniform on either side lately. The Steelers have won each of the past 10 meetings and 13 out of the previous 14.

Still, as the weeks pass and a “0” remains in the loss column, the Steelers are also well aware that the target on their back will keep getting bigger. Cincinnati sees no reason not to aim for the bull's-eye.

“They come in undefeated, coming off a tough win against Dallas, and why not us?” Bengals safety Vonn Bell said. “Why not make the play? Everyone is going to doubt us and put our backs against the wall, but when it’s your chance to make that play, go up there when your number is called. Go hit it out of the park.”

While Roethlisberger spent the week participating in meetings virtually and hitting up offensive coordinator Randy Fichtner over text to stay plugged into the game plan, Mason Rudolph and Josh Dobbs shared practice snaps with the first team.

Pittsburgh coach Mike Tomlin played coy when asked who might start if Roethlisberger is unable to go, though the edge would seem to go to Rudolph, who went 5-3 as a starter last season after Roethlisberger went down with a right elbow injury in Week 2.

Whoever is behind center will have to find a way to give the offense an early jolt. The Steelers have started off sluggish in each of their past two weeks, relying heavily on a no-huddle, five-wide set by Roethlisberger to spark second-half rallies.

The bye week has given long-suffering Cincinnati fans more time to revel in the victory over the Tennessee Titans. Taylor believes his club is taking a more measured approach after showing flashes of what it might become.

“It’s confidence — (that’s) the word I would use to describe our football team with right now,” Taylor said. “We’ve prepared, we’ve felt confident going into these games. We played well in spurts in a lot of games we played. We just hadn’t put it together until the Tennessee game. We have to stay level-headed. We can’t ride that wave of excitement and discouragement.”

The Bengals haven’t beaten the Steelers since 2015, but Taylor said it’s a new year and a different Cincinnati team.

“They’re not afraid of anybody,” he said.

The Cincinnati offensive line has been a mess this season. First, G Xavier Su’a-Filo (ankle) got hurt in Week 1 and just got cleared to practice again this week. OT Bobby Hart (knee), C Trey Hopkins (concussion), OT Jonah Williams (neck) and OG Michael Jordan (illness) all were sidelined for the Titans game, which the Bengals won despite a line filled out with practice squad players.

More bad news came when Fred Johnson tested positive for COVID-19 during the bye week. Hopkins and Jordan are expected to be back for Sunday, but it wasn’t clear if any of the others would be available.

Pittsburgh's typically solid run defense has been battered over the past two weeks by Baltimore (265 yards rushing) and Dallas (144 yards rushing). The possible return of defensive tackle Tyson Alualu (knee) and cornerback Mike Hilton (shoulder) could provide a boost. So would simply sticking to their given assignments instead of freelancing.

“Our goal is to make sure we hold people under 100 yards (rushing),” defensive coordinator Keith Butler said. “Hopefully we get some people back and hopefully we’ll play better and hopefully we’ll coach better than we did. We can’t live like that and still be successful.”