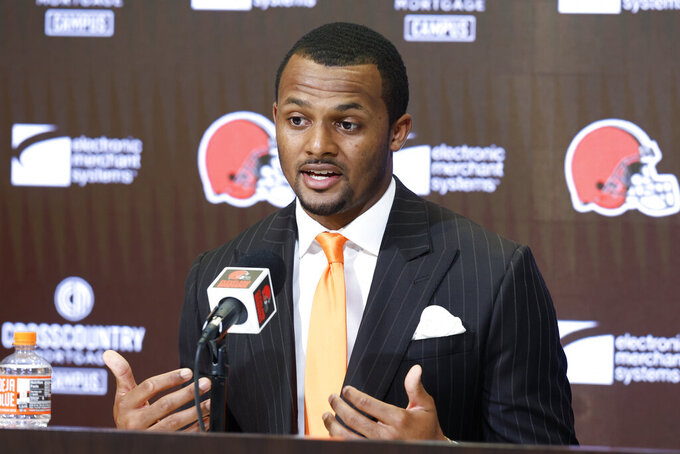 HOUSTON (AP) — While Deshaun Watson’s NFL career has resumed with the Cleveland Browns after grand juries declined to indict him on any criminal charges over sexual misconduct allegations, his legal problems remain far from over.

Lawsuits filed in Houston by 22 women who have accused him of sexual assault and harassment remain unresolved, with no trial date set. Watson has denied any wrongdoing, saying last month he has “never assaulted, disrespected or harassed any woman in my life.”

Tony Buzbee, the attorney for the 22 women, said while his clients have been disheartened that Watson is able to participate in NFL activities amid his legal troubles, the attorney is focused on collecting evidence, including depositions of the quarterback, in anticipation of going to trial in civil court.

“All this other stuff surrounding is just a bunch of noise because my singular focus is preparing the cases to be tried and I intend to win them,” Buzbee said.

But Rusty Hardin, Watson’s attorney, said it would be “ludicrous” for Watson to not be allowed to resume playing when criminal charges were declined by two grand juries and the civil cases are still going through the normal legal channels.

The women allege in their lawsuits that Watson exposed himself, touched them with his penis or kissed them against their will during massage appointments. One woman alleged Watson forced her to perform oral sex.

David Ring, a California-based attorney not connected to the lawsuits and who has represented victims of sexual assault, said while it was a “big victory” for Watson that he wasn’t indicted, negative information from the lawsuits could still be made public that might impact his eligibility to play and whether NFL fans fully embrace him.

“I think there’s a large segment of the NFL fan base out there that’s still very interested in the outcome of the civil cases and again the more information that comes out about him, the more damaging it could be,” said Ring.

Watson was set to be deposed for about 50 hours and Buzbee said he still has another 30 hours to go. Watson’s depositions, which are being done on separate days, could stretch into the summer.

Buzbee and Hardin have different views of how Watson’s depositions have gone so far.

Buzbee said that in the depositions, Watson has offered no reasons for why he contacted people on Instagram for massages and didn’t use professional services offered by the Houston Texans, his former team.

“He literally has no explanation as to why he went about his business this way,” Buzbee said.

Hardin said he is concerned the depositions are only being done so that certain information that’s seen as damaging can be made public and create pressure to get Watson to settle the cases.

“At the end of the day, they don’t shed much light on anything,” Hardin said of Watson’s depositions by Buzbee.

No civil trials were set to happen during the upcoming NFL season as both sides last month agreed to not schedule any trials between Aug. 1 and March 1.

Buzbee said he tried to have the first civil trial in July but Watson’s attorneys weren’t interested.

Hardin said there were some discussions about a possible July trial for one or two of the lawsuits but issues related to scheduling among the lawyers and the judge haven’t been resolved.

Ring said he expects that as the ongoing discovery process in the case, in which depositions, documents and other evidence is gathered, winds down, “serious settlement talks” will likely start. He said 95% of civil lawsuits end up being settled before trial.

“The odds are it’s going to be a settlement at some point,” Ring said.

Buzbee said he’s still planning on having a separate trial for each of the 22 lawsuits.

Hardin said there are no current settlement conversations, but added “a trial is not going to go well for” Buzbee.