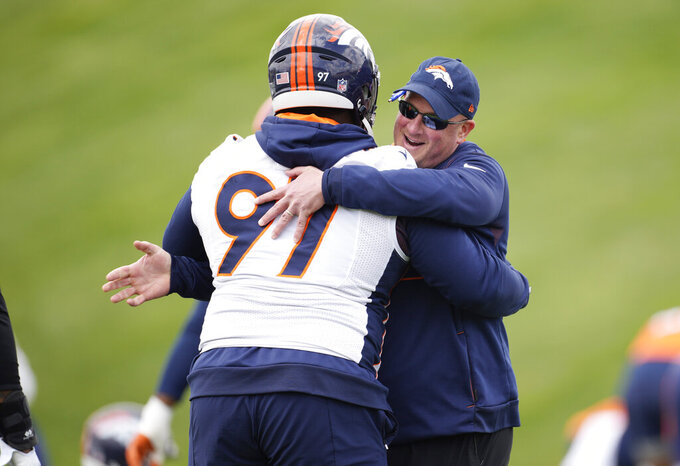 ENGLEWOOD, Colo. (AP) — From the moment Russell Wilson takes the field to the instant rookie head coach Nathaniel Hackett joins his players in end-of-workout wind sprints, the Denver Broncos have been a ball of energy at their offseason practices.

The workouts seem like they're on fast forward with Hackett pinballing from one position group to the next, often stepping in to serve as a decoy or stand-in during individual drills.

It's a stark contrast to the humdrum workouts that were the norm under former head coach Vic Fangio.

After practices, Hackett steps to the podium and proceeds to talk a mile a minute as if he can't wait to fast track this turnaround he's been hired to direct.

“Just seeing him as involved as he is — not just with the offense, but also the entire team — I think everyone feels his entire love for this game, love for the team that he has and the opportunity he’s been given to be the head coach of the Denver Broncos," receiver Courtland Sutton said.

Wilson has energized an offense that's struggled under 10 different starting quarterbacks since Peyton Manning's tenure came to an end after Super Bowl 50.

Instead of sideline throwaways or spikes when the pass rush breaks through, Wilson extends the play with his feet, forcing defenders to prolong their coverage and coaches to account for the ambiguity and improvisation.

“He’s very dynamic," cornerback Patrick Surtain II said. “His second-play mentality where he’s making something out of nothing with his scrambling ability ... that’s something special about him.”

And that's something the Broncos really haven't had since Tim Tebow in 2011.

“He’s exactly who I thought he was," Jones said. "He did something in practice the other day, and everyone was like, ‘That isn’t real.’ Yes, it is. That’s what he does. He makes time and he gives the offense time. He’s going to make a beautiful throw, and it’ll probably be a touchdown.”

That's not something that was ever really said about Trevor Siemian, Brock Osweiler, Paxton Lynch, Case Keenum, Joe Flacco, Drew Lock or Teddy Bridgewater, some of the quarterbacks who started for Denver after Manning retired.

Wilson hasn't shied away from Manning's long shadow. He's actually huddled with him to watch film and talk about coming to Denver for the second chapter of his career as Manning did.

“The thing that Peyton and I both love is football. We can spend all day watching football together,” Wilson said. "... We’ll do more as we go. It’s fun to be able to be around arguably the world’s greatest who has ever played the game at that position. To be able to learn and ask questions and vice versa and talk football — he’s asking me questions and vice versa. That’s the fun part. You have John Elway here, too. You have two of the greatest guys to play the game right in your midst.”

It all adds to the buzz that's permeating the community, where the high-powered couple of Wilson and his wife Ciara, the singer/songwriter, model and dancer, have quickly become the new face of the franchise.

Wilson threw out the first pitch at the Rockies home opener, and he and Ciara, who bought a $25 million mansion in Denver, have been spotted visiting children's hospitals and attending playoff games for the Nuggets and Avalanche.

Last week they jetted off to New York on a day off to attend the release party of the Sports Illustrated Swimsuit 2022 issue featuring Ciara on the cover.

There's less haranguing over the Broncos' half decade of futility nowadays with the airwaves filled with anticipation of Denver challenging the Chiefs and Chargers for AFC West supremacy.

“When you have your quarterback, a lot of questions are answered,” Elway told The Associated Press recently. “I thought (general manager) George (Paton) did a great job in hiring Nathaniel Hackett and in pulling off the trade for Russell Wilson."

These dual dynamos are the primary generators of the electricity buzzing around Broncos headquarters where some of the world's barons of business have been dropping by this month to see for themselves a team that might fetch north of $5 billion to buy.

Five prospective owner groups will get a chance to participate in a second round of bidding next month for what will become the most expensive sale of a North American sports franchise in history. A new owner is expected to be in place by the time the Broncos host the Texans in their home opener Sept. 18.