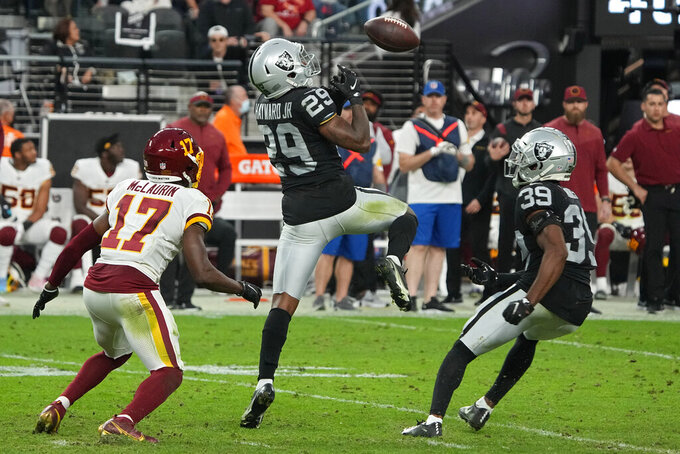 LAS VEGAS (AP) — A few weeks ago, Derek Carr stood up at the podium after a lopsided loss and proclaimed that this year's version of the Raiders would be different and could avoid another collapse in the second half of the season.

After the Raiders fell to Washington 17-15 on Sunday for their fourth loss in five games to deal a big blow to their dwindling playoff hopes, Carr was far less optimistic.

Another game plagued by slow starts on offense and an inability to finish drives with touchdowns have taken a big toll on the Raiders (6-6).

“That’s frustrating. You know because you try to emphasize, you try to fix it, and you go and it doesn’t happen,” Carr said. “It happens one time, and it doesn’t happen every time. Each play tells its own story. It’s frustrating, I wish I could stand up here and break down the whole thing. ... To answer your question, it is frustrating that you emphasize something, it looks good one week, then the other week, and then it’s not. We just got to keep working.”

After a promising start to the season with a 5-2 record, the Raiders have fallen apart since the bye week as the resignation of coach Jon Gruden following the publication of his offensive emails and the release of receiver Henry Ruggs III following a fatal DUI crash have taken a toll.

Las Vegas has scored 16 points of fewer six times in the past nine games, losing all of them as the offense has struggled. The Raiders settled for field goals twice after getting to the Washington 20 or closer, giving them a league-high 43 field goals from inside 40 yards the past two seasons.

“I think it’s a mindset," running back Josh Jacobs said. "I think we kind of just coast a little too much. It’s definitely frustrating.”

Passes to Hunter Renfrow. The one bright spot offensively for the Raiders most of the season has been the play of Renfrow in the passing game. He had a career-high nine passes on 10 targets for 102 yards, giving him back-to-back games with at least 100 yards receiving for the second straight week. Carr has a 111.1 rating when targeting Renfrow this season.

Nate Hobbs. The rookie cornerback made the biggest defensive play when he intercepted Taylor Heinicke in the fourth quarter to help set up a go-ahead field goal. Hobbs had nine tackles for the game, including one for a loss.

Tre'von Moehrig. Las Vegas' other rookie starter in the secondary had a chance to seal the game on the final drive when he was in position for an interception. But he dropped the ball and Washington took advantage by moving the ball 9 yards on the next two plays to set up Brian Johnson's game-winning 48-yard field goal.