Receiver stuck with Titans' deal even after Patriots' push 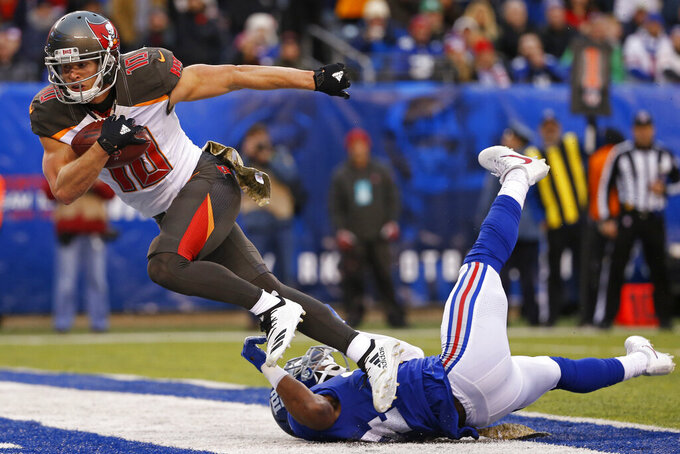 FILE - In this Nov. 18, 2018, file photo, Tampa Bay Buccaneers wide receiver Adam Humphries (10) scores a touchdown against the New York Giants during an NFL football game, in East Rutherford, N.J. For Adam Humphries, Tennessee has been a potential destination for months based on his relationship with Titans general manager Jon Robinson because of their Tampa Bay connection. Not even a late push by the New England Patriots could sway him to walk away from his deal with the Titans. Even considering how much success wide receivers like Humphries have enjoyed with the defending Super Bowl champs.“Obviously, I’m a man of my word, and I’m going to keep my word there,” Humphries said Thursday, March 14, 2019, after signing with Tennessee. (AP Photo/Adam Hunger, File)

NASHVILLE, Tenn. (AP) — For Adam Humphries, Tennessee has been a potential destination for months because of his Tampa Bay connection with Titans general manager Jon Robinson.

Not even a late push by the New England Patriots could sway him to walk away from his deal with the Titans.

Even considering how much success wide receivers like Humphries have enjoyed with the defending Super Bowl champs.

"Obviously, I'm a man of my word, and I'm going to keep my word there," Humphries said Thursday. "But you know it's tough, and it's a big decision. And I mean it's a decision that will impact me for the rest of my life. So I obviously took a lot of thought into that. ... Once I committed to Tennessee, I was really excited to be a Titan and still am."

The Titans introduced Humphries and new left guard Rodger Saffold to reporters Thursday after they signed their new contracts along with safety Kenny Vaccaro who agreed to his new deal staying with Tennessee on Monday.

Humphries said he weighed options between the teams after agreeing to terms with the Titans on a four-year deal worth approximately $36 million with $19 million guaranteed. He flew into Nashville on Wednesday night and signed Thursday before the news conference.

In the end, Humphries' relationship with the Tennessee's current GM helped the Titans seal the deal with a wide receiver whose numbers in both catches and yards have only improved in each of his first four NFL seasons. Robinson was Tampa Bay's director of player personnel and a fan of Humphries when he came out of Clemson.

"He was one of the guys that kind of stood on the table for me there as a rookie tryout and just supporting me there," Humphries said. "And you know when he got here, obviously you know they needed some help in the receiving room and you know hopefully I can come in the slot and you know be of help and help move the chains and help win some games."

Humphries should be a major help to Marcus Mariota. The quarterback is going into his fifth season with the franchise which is trying to decide whether to sign him to a new deal and for how long. Humphries caught a career-high 76 passes last season as a slot receiver, giving Mariota another alternative to three-time Pro Bowl tight end Delanie Walker under pressure.

The Titans hope Safford will help give Mariota time to find Humphries.

The guard brings bulk and experience to help protect Mariota after the Titans allowed 47 sacks last season. He's 6-foot-5 and 323 pounds and has started 111 of 114 career games. He also loves to run block pushing people away, which should help Derrick Henry.

"I'll be able to use my talents to be able to help them do that a little bit little bit more," Saffold said. "I think that I do a great job of helping out especially on like double teams. And I think they will be able to open up really great lanes for Henry, we'll be able to protect Mariota. I just feel like this is a good fit."

Vaccaro likes the direction Tennessee is heading and how the Titans use him, so he opted to extend his stay in Nashville.

He joined the Titans last August after Johnathan Cyprien tore an ACL, and spent the weeks leading up to free agency retweeting fans praising him on Twitter, making it clear that he wanted to stay in Tennessee. Vaccaro said Tennessee is the first team allowing him to play as a true safety, lining up alongside Kevin Byard, after playing in passing situations in New Orleans where he was a first-round draft pick.

Vaccaro refused to make a prediction on how much better the Titans can be on defense with coordinator Dean Pees also back. The Titans ranked second in scoring defense and sixth against the pass. Vaccaro is very excited to see what he can do with an entire offseason with Tennessee and a secondary featuring Byard and cornerbacks Logan Ryan, Malcolm Butler and Adoree Jackson.

Whatever happens, Vaccaro will be a big part of secondary coach Kerry Coombs' plans.

"He said, 'Your best football is ahead of you,'" Vaccaro said.