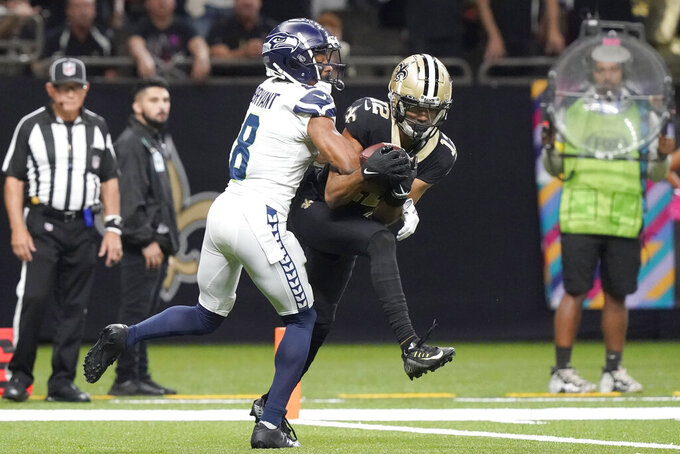 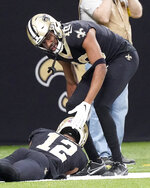 “I'm ready to get back to it,” Olave, who was drafted 11th overall last spring, said after practice on Tuesday. "We've got to get back to winning. So, that's the No. 1 goal."

With top veteran receiver Michael Thomas missing New Orleans’ past three games because of his injured foot, Olave has emerged as the Saints’ most productive pass catcher so far this season with 25 receptions for 398 yards and two touchdowns.

But it was during his second touchdown in a Week 5 victory over Seattle that Olave got a concussion. As Olave was coming down with the catch, Seahawks cornerback Coby Bryant slammed the receiver to the turf.

Olave said he briefly lost consciousness when his helmet impacted the turf and lost his grip on the ball. The play initially was ruled an incomplete pass, but was overturned on video review to the touchdown.

Olave said the injury was “not really” scary to him.

“It’s a contact sport. Stuff like that’s going to happen,” Olave said. “But I’m just glad I’m healthy. I’m glad I got back on my feet. I’m glad I've got another opportunity to play.”

Olave did not take issue with the way Bryant tackled him.

“It was a good play by the corner,” Olave said, noting that he knew Bryant from college, when the rookie defensive back played for Cincinnati. "We went against each other in college. He’s good people. He reached out to me to make sure I was good. He’s a good player, too.”

Olave's return has considerable significance for the Saints, who had to play without their top three receivers against the Bengals. Receiver Jarvis Landry (ankle) also did not play, and like Thomas, has not practiced this week, either.

The Saints relied heavily on their running game last week, gaining 228 yards on the ground. Quarterback Andy Dalton had his least productive game in three starts — passing for 162 yards and one TD to Tre’Quan Smith — since season-opening starter Jameis Winston went out with back and ankle injuries.