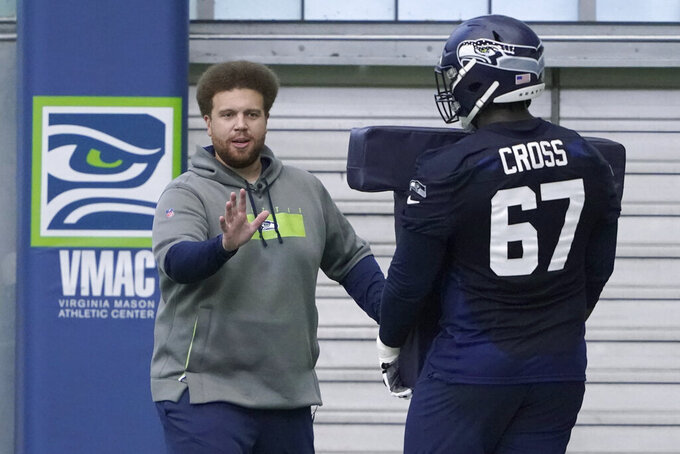 RENTON, Wash. (AP) — With such limited numbers for their rookie minicamp on Friday, of course the Seattle Seahawks were going to line up Charles Cross at left tackle and Abe Lucas at right tackle.

There’s a decent chance those two end up in the same spots in Seattle’s starting lineup come September.

“I wouldn’t be surprised to see some guys have a shot at pushing for a lot of playing time out of this class,” coach Pete Carroll said. “I don’t know how much different that is, but it seems that it’s really specific and we can all kind of visualize how that’s going to happen."

Seattle had questions at left and right tackle entering the draft and seemed to answer those by taking Cross with the No. 9 overall pick out of Mississippi State and following up in the third round by selecting Lucas out of Washington State.

Cross seems almost certain to be the starting left tackle, especially since last year’s starter, Duane Brown, is a free agent. Lucas is likely to be in a competition with Jake Curhan, a part-time starter from last season, for the right tackle job.

Those decisions and competitions are coming later in the summer. Friday was about getting on the field as professionals for the first time.

“It’s pretty helpful just having another guy there who I can talk to and relate to,” Cross said.

Cross was the higher-profile pick. But for Lucas, getting drafted by the Seahawks keeps him at home playing for the team he grew up cheering for. Lucas is from Everett, Washington, and he said his first memory of being a Seahawks fans was the Super Bowl loss to Pittsburgh, however painful that was for Seattle.

Lucas was across the state in Pullman during the draft. He drove home early in the week and quietly spent time with family before reporting to the Seahawks.

“I really was just staying with my family and just kind of keep it on the (downlow), kind of away from everybody,” Lucas said.

The challenge for both tackles will be how well and how quickly they can adjust to changes in their stances and playing in a run-oriented offense. Both played in college in the Air Raid offense, where pass blocking was the priority, and each played the majority of his time in a two-point stance.

They’ll play in a traditional three-point stance with the Seahawks and will have plenty of run-blocking responsibilities. But on the first day, Carroll said both seemed to adjust just fine.

“These guys are too good athletically. I mean, they’re really comfortable in their bodies, and can move and they’re well-proportioned, and they’re quick and they can run fast for big guys,” Carroll said. “It’s just not going to be a big transition like we might think.”

NOTES: Fifth-round pick CB Tariq Woolen did not practice due to a sore hamstring. Carroll said Woolen went through the walkthrough earlier in the day. ... One interesting name on Seattle’s tryout roster is Nick Paul from Division II Northeastern State. Paul is listed at 6-foot-4 and 385 pounds but Carroll indicated Paul is even larger. Seattle is giving Paul a look at defensive tackle. "This the biggest man I ever saw, now. He did OK,” Carroll said. ... The Seahawks have signed four of their nine draft picks: Woolen and fellow fifth-rounder Tyreke Smith, and seventh-round picks Bo Melton and Dareke Young.