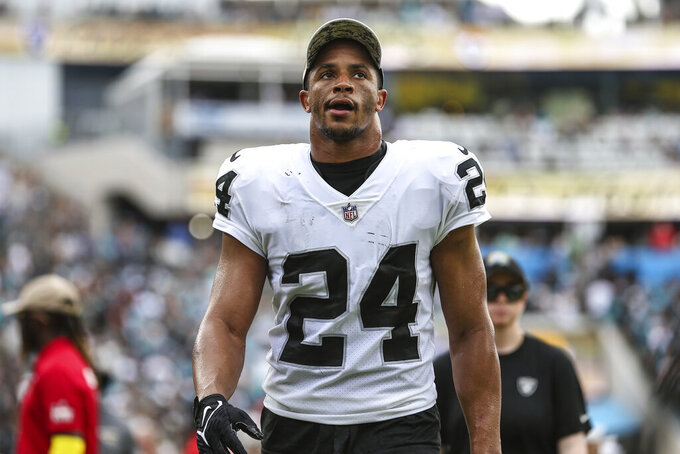 FILE - Las Vegas Raiders safety Johnathan Abram (24) walks off the field at halftime of an NFL football game against the Jacksonville Jaguars on Sunday, Nov. 6, 2022, in Jacksonville, Fla. The Packers claimed Abram off waivers this week from the Raiders, who had taken him with the 27th overall pick in the 2019 draft. Abram becomes the third former Raider to join Green Bay since the Packers hired ex-Raiders interim head coach Rich Bisaccia as special teams coordinator. (AP Photo/Gary McCullough, File)

Abram was a first-round selection of the Raiders in 2019 but fell out of favor with a new coaching regime in Las Vegas this season. Abram started 27 games during the 2020-21 seasons and had 116 tackles last season with the Raiders.

Abram started the first six games of this season for the Raiders, but appeared to not have a future role under new coach Josh McDaniels. His release was another step of the Raiders’ makeover of the prior regime headed by coach Jon Gruden and general manager Mike Mayock.

Abram was claimed by Green Bay three weeks ago and appeared in two games with the Packers with almost all his playing time coming on special teams.

Abram was released on Tuesday and his claim by the Seahawks is a low-risk move that could provide some depth with first-round talent to the position.

“Haven’t got a chance to really watch him too in depth. Seen some stuff obviously. But I know we put the claim in and we got him so I’ll learn a lot more over the next 24 hours,” Seattle defensive coordinator Clint Hurtt said.

Seattle was in the market for safety help with concern about elbow and shoulder injuries suffered by Ryan Neal in last Sunday’s loss to the Raiders. Neal has been a steady starter, taking the spot of Jamal Adams after he was lost for the season to a knee injury in Week 1. Neal has started the past seven games for the Seahawks.

Coach Pete Carroll said Wednesday that despite the elbow and shoulder issues Neal was optimistic about being available for Sunday’s game at the Los Angeles Rams.

“He went through the walkthrough today. I think we’re going to hold him out of practice, but he’s much better than we had anticipated just coming off the field and all that,” Carroll said. “He’s a tough dude. He says he’s not missing, so we’ll see if he can pull it off.”