Seahawks leaning on rookies now paying off in strong start 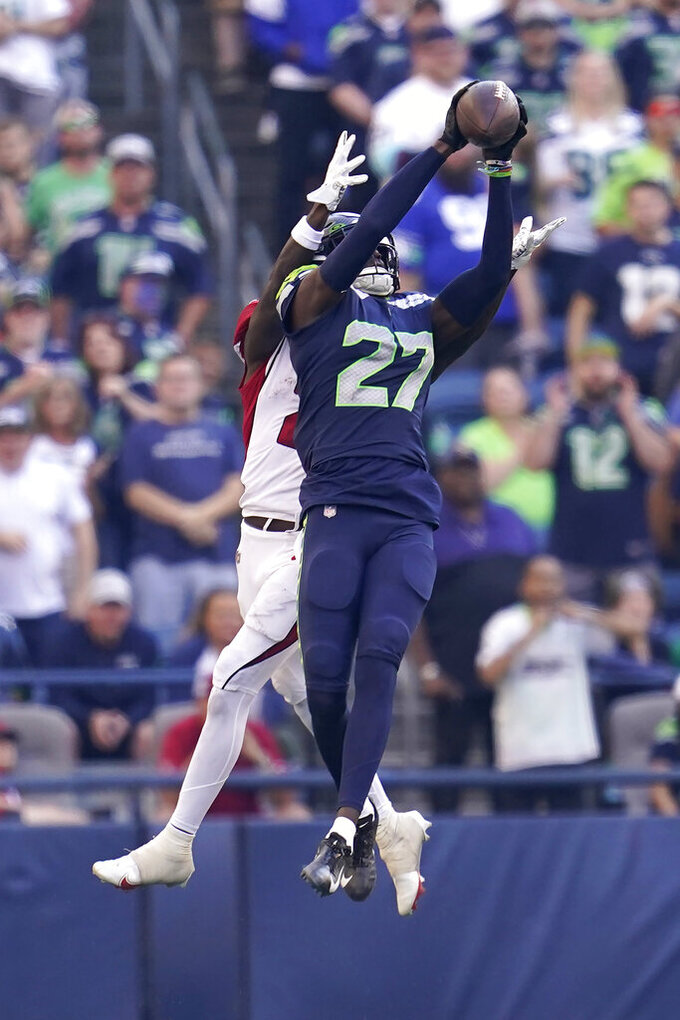 RENTON, Wash. (AP) — Pete Carroll was in the middle of extoling one of the many rookies that have made an immediate impact on the Seattle Seahawks when he made perhaps the overstatement of the season in regard to his team.

“So far we’ve taken advantage of this past draft,” Carroll said.

Whether it’s offensive tackles Charles Cross or Abraham Lucas, defensive backs Tariq Woolen or Coby Bryant, or running back Ken Walker III, the Seahawks have received a wealth of production from their rookie draft class that’s a big reason why Seattle is sitting at 4-3 and currently on top of the NFC West.

Play the kids? Certainly, the Seahawks are taking that to the extreme and so far it’s paid off.

“It’s special. It’s like seeing your little brother shine,” safety Quandre Diggs said of the rookie defensive backs. “For me, those are really like my little brothers. I’ve been super excited about both of them since the jump.”

While the play of quarterback Geno Smith has deservedly earned most of the attention for Seattle’s surprising start, the rookie class is playing a role beyond what was expected back in April during the draft.

Woolen, a fifth-rounder, is starting at cornerback and is tied for the NFL lead in interceptions with four and had his streak of four straight games with a pick snapped last week. Bryant, a fourth-round pick, has taken over as the nickel cornerback for Seattle and is leading the league with four forced fumbles.

Cross and Lucas were the two expected to move into prominent roles and both have excelled as the starting left and right tackles respectively on Seattle’s improved offensive line.

And Walker has broken out in the past two weeks taking over as Seattle’s starting running back following a season-ending injury to Rashaad Penny. Walker had 167 yards rushing — previously 168 before a stat correction by the league this week — and two touchdowns in Seattle’s impressive win over the Los Angeles Chargers last Sunday.

“I could never have foreseen that really, honestly. I’d like to say, ‘Oh, yeah, I knew that,’ but I didn’t,” Carroll said of the class. “This is what we hope for. You hope when you draft a guy you can picture what he’s going to do. And you hope he’s going to fit in and be a factor for us. But I don’t know, how many, like six guys or something are playing and starting and doing stuff. I don’t know how many it is. But those guys, they’re just coming through.”

Carroll has long believed in the idea of giving young players an opportunity to shine. That was at the foundation of what Seattle created a decade ago when three straight successful draft classes yielded the foundation for what became back-to-back NFC championship teams and the only Super Bowl victory in franchise history.

They were built around smart draft picks playing on rookie contracts with a mix of veterans sprinkled in.

Eventually, those rookie contracts became mega deals for several of those stars — Richard Sherman, Bobby Wagner, Russell Wilson, Doug Baldwin to name a few — and having veterans locked into spots took away opportunities for younger draft picks to develop. Throw in some poor drafting and there are explanations behind the turbulence Seattle has faced with its roster in the years since those Super Bowl trips.

This year has become a nod back to those early days of the tenure between Carroll and general manager John Schneider. It helped that Seattle had a draft pick in the top 10 and was able to anchor the offensive line by drafting Cross at No. 9 overall, a pick acquired after trading Russell Wilson to Denver.

Cross has played every offensive snap through seven games, as has Lucas, who was taken in the third round. Woolen and Bryant have established themselves as pieces of Seattle’s future in the secondary and Walker’s past two games are signs of his potential as a dynamic lead running back.

It’s not out of the question that by the end of the season Seattle could have several players in the conversation for rookies of the year.

“There’s a lot of room for improvement, not just for me, but for everyone as a whole,” Bryant said. “Just got to keep working and keep getting better.”

NOTES: Seattle WR DK Metcalf (knee) was a spectator at practice, and it remains uncertain if he’ll be able to play Sunday against the New York Giants. Metcalf suffered an injury to the patellar tendon in his left knee against the Chargers. ... G Phil Haynes was cleared from concussion protocol but did not practice on Wednesday. Also back was G Gabe Jackson (knee/hip) after missing the past two games. ... Seattle activated DE L.J. Collier from injured reserve and he returned to practice. RB Travis Homer (ribs) and CB Tre Brown (knee) started their 21-day clock for rejoining the active roster.