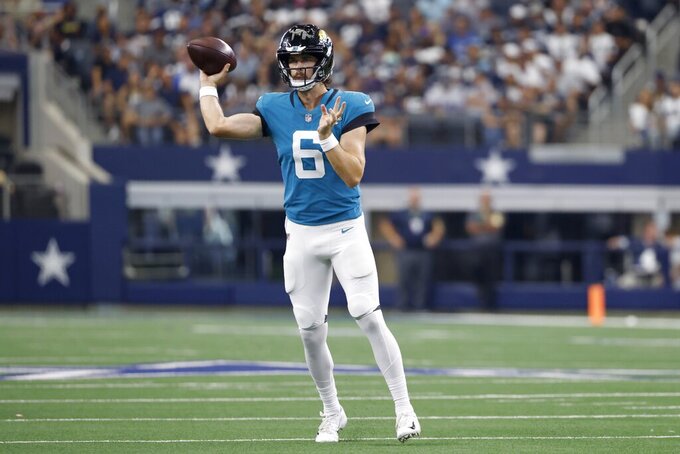 Jacksonville Jaguars quarterback Jake Luton throws a pass in the second half of a preseason NFL football game against the Dallas Cowboys in Arlington, Texas, Sunday, Aug. 29, 2021. (AP Photo/Ron Jenkins)

Luton was released by Jacksonville this week and took the roster spot made available when Sean Mannion was released by Seattle. Luton started three games last season for the Jaguars. He is returning to his home state with the Seahawks.

“I’ve got three little brothers who are so excited. They’re fired up to have me here, and I’m really excited,” Luton said. “I’m excited for the opportunity, the chance to come in and learn from some great coaches and some great players. It’s been a great situation.”

Ogbuehi has missed time during training camp due to a biceps injury and going on injured reserve means he will miss the first three games of the season. Seattle was hoping Ogbuehi would compete with Brandon Shell for the starting spot at right tackle.

Vital will play tight end for Seattle but he has not played football since middle school. He’s listed at 6-foot-5, 250 pounds and was a three-time all-Big 12 defensive team selection. Vital had six points and 11 rebounds in Baylor’s national championship win over Gonzaga last April.

Vital had played in the NBA Summer League with Portland.