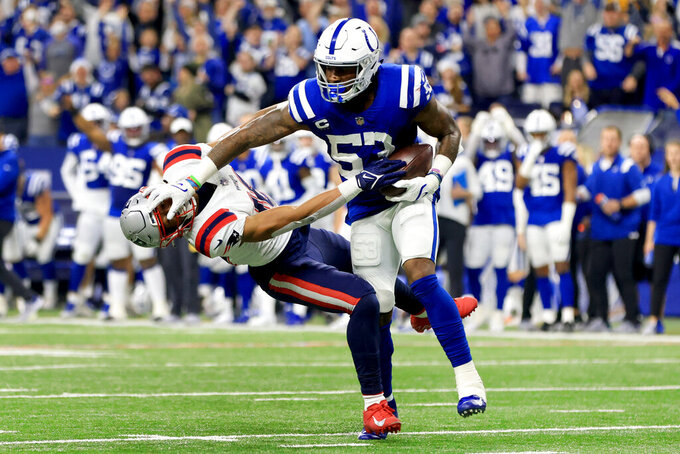 What’s more surprising than Bill Belichick’s team making sloppy mistakes? How about the longtime Patriots coach apologizing for his surly attitude in the post-game media availability.

The “on to Cincinnati” meme-maker told reporters on Monday that he was sorry for being curt after the 27-17 loss to the Indianapolis Colts that dropped New England from the No. 1 seed in the AFC. Belichick’s answers on Saturday night ranged from surly to argumentative, but the new week brought a new attitude.

“Look, fellas. I apologize. I seemed like I was a little short with you after the game,” Belichick said. “Not really trying to be short, but honestly, there wasn’t too much to say. I don’t know there’s a whole lot more to say now, but it’s not your fault. It was a frustrating game.”

The Patriots had won seven in a row to propel themselves to the top of the conference, but things fell apart quickly in Indianapolis.

New England was pushed around on the Colts' first possession, with Jonathan Taylor running six straight times for 33 yards to help set up a touchdown. Then Indianapolis blocked a punt and recovered it in the end zone to make it 14-0.

A field goal made it 17-0 before Mac Jones was picked off after driving New England to the Indianapolis 15 at the end of the first half. Jones threw his second interception to start the second half, setting up the Colts' 46-yard field goal attempt; it missed, but an offside penalty gave them another chance, which was successful to give Indianapolis a 20-0 lead.

In all, the Patriots committed eight penalties, including three false starts, and another that got Kyle Duggar kicked out of the game.

So it’s no wonder that Belichick, never a ray of sunshine, was especially grouchy. Asked about Taylor, who finished with 170 yards, Belichick said, “I’ve said it like five times, I could just say it another five times. We didn’t do anything well enough to win tonight, including giving up 225 yards rushing.”

The loss cost the Patriots pole position for the conference’s No. 1 seed and a first-round bye. Next up: Buffalo, their closest pursuer in the AFC East.

“If we don’t handle it well, it’ll be our season,” defensive back Devin McCourty said. “Guys in here have all lost games. We started the season off losing games, so we know what we need to do, and we know how we need to practice against a team we know well.”

The Patriots still hold a one-game lead over Buffalo in the AFC East; they could clinch a playoff berth and all but wrap up the division by beating the Bills next week. And New England has the second-easiest remaining schedule in the conference (to the Chargers), with its last two games against Jacksonville and Miami.

Discipline. The six offensive penalties were a season high. Duggar was ejected for throwing a punch in a skirmish with Michael Pittman Jr., who also was disqualified. On the blocked punt, Matthew Adams came through the line unblocked.

“They played great, but we also just shot ourselves in the foot. So we just have to move on,” Jones said. “Flush this game down the toilet and just roll.”

Hunter Henry caught two touchdown passes and now leads all NFL tight ends with nine for the season; it's also a career high. Nick Folk got a personal high with his 34th field goal of the season. He has made 53 in a row from inside 50 yards, and his 133 points this year are also a personal best.

Jones looks like a longtime solution at quarterback some weeks, and others the rookie makes rookie mistakes. He blamed the performance on a week of bad practices after a bye.

“Starting with me, the energy was kind of low, maybe like feeling a little sorry for ourselves because we’re coming off the bye and stuff," he said. “We just didn’t practice well, and that just reflects how we played. And I didn’t practice good, and I know a lot of guys on our team felt the same way.”

LB Ja’Whaun Bentley injured his ankle and WR Nelson Agholor went out with a possible concussion.

1-4 -- Belichick’s regular-season record without Tom Brady with an extra week to prepare (including bye weeks and the games that were postponed because of the Sept. 11, 2001, attacks). The Patriots are 15-8 (.682) overall with an extra week since Belichick took over in 2000, but that’s actually worse than his overall New England winning percentage of .723.

The Patriots host Buffalo on Sunday in a rematch of the windy Dec. 6 game when Jones threw just three passes in a 14-10 victory. The Bills can still catch New England in the AFC East but, even if they split the series, would still trail in the conference record tiebreaker.

“We have to get ready to go,” McCourty said. “A division game, a team we just beat a couple weeks ago, that’ll be ready to go because they’re in a must-win situation.”