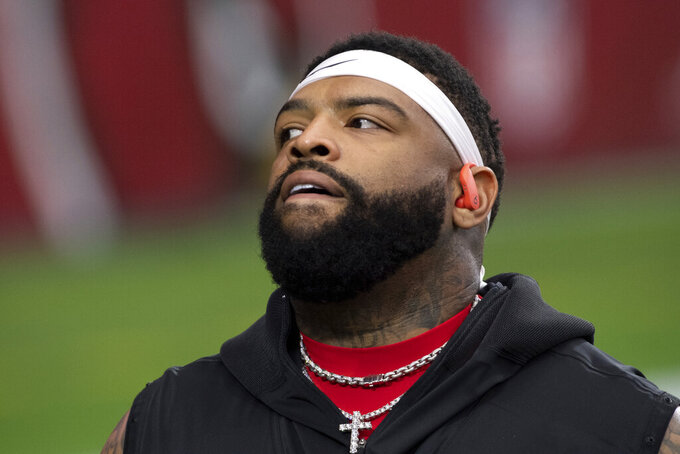 FILE - San Francisco 49ers offensive tackle Trent Williams (71) looks on prior to an NFL football game against the Arizona Cardinals, in Glendale, Ariz., in this Saturday, Dec. 26, 2020, file photo. The San Francisco 49ers locked up their biggest potential free agent for the long term by agreeing to give star left tackle Trent Williams the richest contract ever for an offensive lineman. Williams' agents at Elite Loyalty Sports say the deal agreed to early Wednesday morning, March 17, 2021, will pay Williams $138.1 million over the next six years, surpassing the $138 million deal David Bakhtiari got from during last season. (AP Photo/Jennifer Stewart, File)

Some teams officially announced deals that consistently leaked during the “legal tampering” period that began Monday, and others stayed pretty silent. That trio of players with a total of 31 pro seasons made out very well despite not getting big offers immediately.

The 49ers held onto the best tackle who could have become a free agent by giving Williams the richest contract ever for an offensive lineman. Williams is a particularly intriguing case. His agents at Elite Loyalty Sports said the deal agreed to early Wednesday will pay Williams $138.1 million over the next six years, surpassing the $138 million deal David Bakhtiari got from Green Bay a year ago. Williams also will get the biggest signing bonus ever for an offensive lineman at $30.1 million, as well as $55.1 million guaranteed.

Basically, he gambled on himself. Seeking to get out of Washington, where Williams believed the medical staff botched a cancer diagnosis, he sat out 2019. Midway through that season, he hoped to be traded before the deadline, which didn’t occur. Williams was banished from the Washington facility by former team president Bruce Allen.

He landed in San Francisco in a draft-day trade for a 2020 fifth-round pick and a 2021 third-rounder.

"Trent’s a game changer,” said fullback Kyle Juszczyk, who signed a five-year contract to stay in San Francisco earlier in the week. “He’s somebody that teams have to scheme around. They have to change what they’re doing because he’s out there, and he’s a guy that we can just completely count on and know that he’s going to get his job done and then some. You can’t pay too much for a guy like that. Those are guys that really make a difference and put you over the top and and put you into that championship caliber.”

Green joins the Cardinals and ends a decade in Cincinnati, though he has been plagued by injuries recently and sat out 2019. Arizona, which also acquired center Rodney Hudson from the Raiders for a third-round draft pick, already has a No. 1 receiver in DeAndre Hopkins, and long-time star Larry Fitzgerald has not made a decision on returning for an 18th season. He got a one-year deal worth $8 million. The Cardinals added veteran placekicker Matt Prater, who owns the NFL record with a 64-yard field goal made in 2013 with Denver.

Sanders, joining his fourth franchise, didn't make out quite so well as Green as he heads to Buffalo. But he gets to join All-Pro receiver Stefon Diggs catching balls from Josh Allen for a team on the rise that went to its first AFC title game since the 1993 season before losing at Kansas City. Sanders also played for Pittsburgh and Denver, where he won a Super Bowl, and spent last season with New Orleans. He'll get about $6 million for 2021.

— Quarterback Tyrod Taylor agreed to a one-year contract with Houston, giving the Texans an insurance policy if they trade Deshaun Watson or if they don’t trade him and he decides to sit out this season. Watson has been unhappy with the direction of the team and has requested a trade.

— Eight-time Pro Bowl cornerback Patrick Peterson left Arizona after 10 seasons to join the Minnesota Vikings, who agreed with the 30-year-old on a one-year contract worth up to $10 million, according to a person with knowledge of the negotiations, speaking on condition of anonymity to the AP because the team had yet to announce the deal.

— The Panthers went for defense with linebackers Haason Reddick and Denzel Perryman and end Morgan Fox.

Reddick played under Panthers coach Matt Rhule at Temple. The 13th overall pick in the 2017 draft is coming off a breakout season with 12 1/2 sacks, six forced fumbles and 15 tackles for a loss.

— Raiders coach Jon Gruden, who likes speedy wideouts as much as he enjoys watching game film, added John Brown, recently cut by Buffalo. Brown could be a veteran deep threat in Las Vegas after Nelson Agholor left in free agency for New England. But Brown, who turns 31 in April, is coming off the second-least productive season of his career and was limited to nine games because of knee and ankle injuries.

The Raiders also are bringing back versatile offensive lineman Denzelle Good on a two-year contract and reserve receiver Zay Jones on a one-year deal.

— Seattle made its first big move to bolster its offensive line and appease quarterback Russell Wilson by acquiring veteran guard Gabe Jackson from Las Vegas for a fifth-round draft pick.

The Seahawks addressed another need, agreeing to terms with tight end Gerald Everett on a one-year deal. They also signed defensive tackle Poona Ford to a two-year contract, locking up one of the key pieces of their defense.

— Kansas City agreed to a $5 million contract for next season with three-time Pro Bowl guard Kyle Long, who will come out of retirement. Earlier this week, the Chiefs gave an $80 million, five-year deal to Patriots offensive lineman Joe Thuney. KC's offensive line was a sieve in its Super Bowl loss to Tampa Bay.

— Detroit took away one of division-rival Green Bay’s offense pieces, giving a two-year contract to running back Jamaal Williams. He was a backup to Aaron Jones with the Packers, and figures to fill the same role in Detroit behind D'Andre Swift and Kerryon Johnson. The Lions also arranged a trade with the Rams for steady defensive tackle Michael Brockers as they attempt to rebuild one of the NFL's worst units. They released veteran cornerback Desmond Trufant.

— The Falcons acquired tight end Lee Smith from the Bills for a seventh-round draft pick next year. Mostly a blocker, the 11-year veteran has played in 133 games, with 64 receptions for 458 yards and 10 touchdowns.

— Tackle Nate Solder renegotiated his contract with the New York Giants and will return after opting out of last season because of family concerns about COVID-19. Solder was to earn $9.9 million in the upcoming season under his old contract and will earn roughly $4 million instead.

— Washington stayed busy by agreeing with wide receiver Curtis Samuel, who becomes the No. 2 wide receiver behind Terry McLaurin. The 24-year-old shined in Carolina’s victory at Washington last season, setting career highs with 106 yards receiving and 52 yards rushing. Washington also agreed with cornerback William Jackson on a contract worth $42 million over three years with $26 million guaranteed.

Placekicker Dustin Hopkins will return, as will running back Lamar Miller. Earlier this week, the team reached agreement with 16-year veteran quarterback Ryan Fitzpatrick to join his ninth team and perhaps replace NFL Comeback Player of the Year Alex Smith, who was released.

— The Cowboys released punter Chris Jones, who was with the club 10 years and started the past eight seasons. Injuries sidelined Jones for the second half of the 2020 season. The move saves Dallas about $2 million in salary cap space and clears the way for Hunter Niswander to take over.