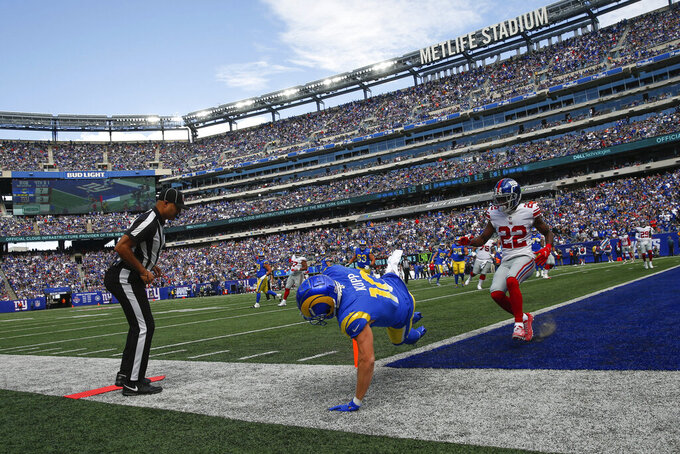 EAST RUTHERFORD, N.J. (AP) — Sean McVay wasn't happy walking into the postgame news conference after his Los Angeles Rams had their way with the banged-up and struggling New York Giants.

Despite getting another big game from quarterback Matthew Stafford and receiver Cooper Kupp, and four takeaways from his defense, McVay didn't enjoy the opening quarter of the Rams' 38-11 win on Sunday.

The problem was, McVay's team had a slow start. It's not the first time this season, but when you're 5-1, coaches expect a lot.

“I think we can be a lot sharper offensively,” McVay said of being shut out in the first quarter. “We've got to start faster. There’s no excuse. We got to be better than that. We’ll take the win and I thought our guys did a nice job today.”

The Rams were very good in the second and third quarters in taking a 38-3 lead over the Giants (1-5), who were missing many of their key players on offense.

“I'm proud of the way we just stuck to it,” said Stafford, who threw two of his four touchdown passes to Kupp. “Our defense did a great job in the second quarter giving us some short fields and we were able to score points.”

Stafford connected with Kupp on scoring passes of 3 and 13 yards. He also found Robert Woods for a 15-yard score and running back Darrell Henderson on a 25-yarder in a 28-point second quarter.

Kupp, who was tied for second in the league with 37 catches entering the game, added nine more receptions for 130 yards. Safety Taylor Rapp had two interceptions to account for half of Los Angeles' takeaways.

Henderson also scored on a 2-yard TD run in the big second quarter and Matt Gay kicked a 32-yard field goal as the Rams beat the Giants for the third time in five seasons.

Trailing 28-3 at the half, the Giants were challenged by coach Joe Judge to play 60 minutes.

“I’m extremely disappointed,” Giants safety Logan Ryan said. “It’s not acceptable, to be honest. It's not acceptable. I think we had to go out there a second half and fight so that we could try to earn some respect, that just hasn’t been acceptable. The results. So it’s not good.”

A week after sustaining a concussion in a loss to Dallas, Daniel Jones started at quarterback for the Giants. He led the offense to a 27-yard field goal by Graham Gano on the opening series, but the Rams picked him off three times and recovered a fumble on a strip-sack by Ogbonnia Okoronkwo.

Jones finished 29 of 51 for 242 yards playing without running back Saquon Barkley and receiver Kenny Golladay. Playmaking rookie wide receiver Kadarius Toney (ankle) was lost on the first series, contributing to New York totaling 261 yards of offense, most of it late.

Eli Penny scored on a 4-yard run and Jones threw a 2-point conversion to Kyle Rudolph after the Rams built a 38-3 lead.

After being stopped on their first two series, the Rams broke the game open in the second quarter. Stafford capped a quick 66-yard drive with his TD pass to Woods. The strip-sack of Jones led to Kupp's short, fourth-down TD catch on a 12-yard possession. Henderson's touchdown run came after Rapp's interception return to the Giants 14. His scoring catch came in the final minute of the half.

The Giants celebrated the 10th anniversary of their win over Tom Brady and the New England Patriots in Super Bowl 46 with a weekend of activities, including a halftime ceremony. Former coach Tom Coughlin spoke to the Giants' fans, many of whom were long gone when the game ended.

Giants: Toney aggravated an ankle injury after making three catches for 36 yards early. LT Andrew Thomas, who did not play last week because of a foot injury, hurt an ankle in the second quarter and did not return. WR C.J. Board was carted off the field late in the half with a broken arm. It further reduced the Giants' receiving corps, which was also without Golladay (knee) and Darius Slayton (hamstring). Defensive tackle Danny Shelton was knocked out of the game late with a pectoral injury.

Rams: At home against Stafford's old team, Detroit, next Sunday.