Steelers could tab Roethlisberger's replacement in 1st round 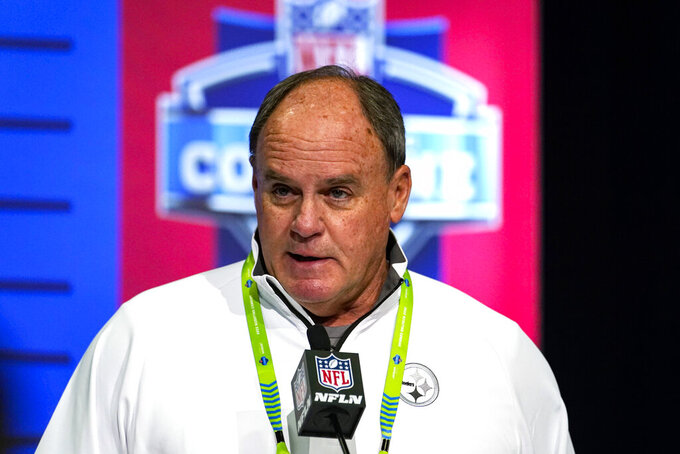 LAST SEASON: The Steelers somehow managed to reach the playoffs in quarterback Ben Roethlisberger's swan song despite an offense and a defense that both ranked in the bottom third in the league. Pittsburgh bet on a rebuilt offensive line to keep Roethlisberger upright and the results were mixed at best. The running game showed signs of life behind rookie Najee Harris but the defensive line struggled to stop the run following an injury to Tyson Alualu in Week 2 and the season-long absence of Stephon Tuitt. Pittsburgh finished dead last in yards rushing allowed and yards per rushing attempt. Outside linebacker T.J. Watt looked worth every last dime, winning the Defensive Player of the Year award by tying an NFL record with 22 1/2 sacks after signing a lucrative contract extension on the eve of the season. The rest of the defense was spotty and the Steelers looked outclassed against the AFC's best in Kansas City and Cincinnati, going a combined 0-4 against the two teams that reached the conference championship game.

OUTLOOK: GM Kevin Colbert will step down following the draft following a more than 20-year run with the Steelers that included two Super Bowl victories and an appearance in a third. His legacy is secure, but his final draft in Pittsburgh may be the most important he's had since taking Roethlisberger in the first round in 2004. The tragic death of quarterback Dwyane Haskins in Florida earlier this month heightened the need for a quarterback to compete with Mason Rudolph and Trubisky. The incoming crop of QBs is underwhelming in terms of quantity, though Colbert has insisted he likes the quality. It's unlikely Pitt QB Kenny Pickett will be available at No. 20. Willis offers the kind of mobility head coach Mike Tomlin has stressed is a priority, but he might not be there when the Steelers are on the clock. There are also serious needs along the defensive line, in the secondary and at wide receiver. Pittsburgh will never admit it is rebuilding. Taking a quarterback in the first round would indicate the Steelers are in the midst of one anyway.