The Super Bowl grew out of modest Los Angeles beginnings 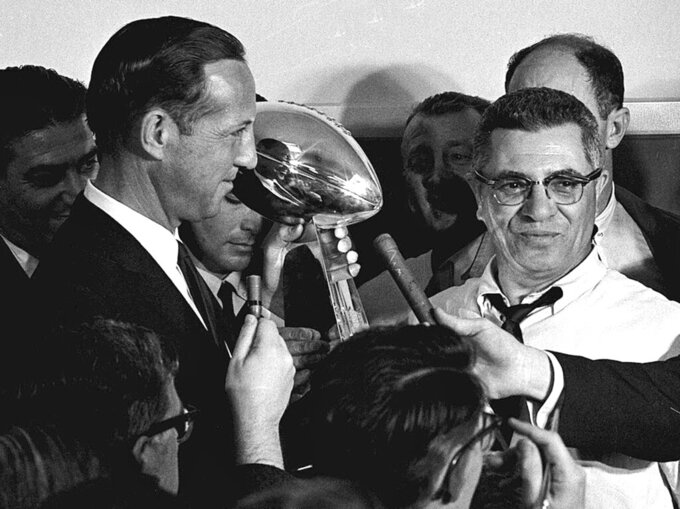 FILE - Football commissioner Pete Rozelle, left, presents the trophy to Green Bay Packers coach Vince Lombardi after they beat the Kansas City Chiefs in the Super Bowl in Los Angeles, Jan. 15, 1967. The trophy for the Super Bowl winner has borne Lombardi's name since his death in 1970. (AP Photo, File) 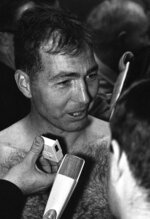 LOS ANGELES (AP) — Pete Rozelle never liked the name that was half-jokingly suggested by Kansas City Chiefs owner Lamar Hunt for the first annual game between the champions of the NFL and the AFL.

Hunt agreed, telling the NFL commissioner they could surely think of something better to call it than the Super Bowl.

So the first edition of what has become the apex of sporting spectacle for much of the world was officially dubbed the AFL–NFL World Championship Game by the leagues involved when Vince Lombardi's Green Bay Packers met Hank Stram's Kansas City Chiefs on Jan. 15, 1967, before a less-than-sellout crowd on a sunny Sunday at the Los Angeles Memorial Coliseum.

Reporters, fans and many other football people were already calling it the Super Bowl, much to Rozelle's consternation. Two years later, the sport gave in and adopted the name officially for the event that was already growing into the sociocultural behemoth it is today.

But the first Super Bowl had a fraction of the pomp and circumstance that currently surrounds this weeklong celebration of football, fandom and consumerism.

The Super Bowl was born from the merger agreement between the NFL and the AFL in June 1966. As part of the deal to combine the leagues over a period of several years, they agreed to match their respective champions in a title game.

But the people making the decision didn't yet understand what they had created: The championship game largely was an afterthought in the complicated, emotional merger. The leagues didn’t settle on Los Angeles as the site for the game until Dec. 1, 1966, and the leagues didn’t even decide when to play it until Dec. 13.

After Green Bay beat Dallas and Kansas City beat Buffalo to secure their spots, the pressure in the inaugural Super Bowl was heaped squarely on the shoulders of the Packers. That's because of the steadfast belief around the sport and in the media that the staid NFL’s players, competition and top teams were all superior to the product from the upstart AFL, which had turned professional football into a chaotic business with its bold moves for top athletes to play their exciting game.

Those notions would be thoroughly debunked by Joe Namath’s New York Jets two years later and rendered obsolete by the merger two years after that. But Lombardi and Green Bay knew every other NFL team was counting on them to maintain the league’s perceived predominance.

Lombardi felt it: Frank Gifford famously noted Lombardi was “shaking like a leaf” when the broadcaster did his pregame interview with the Hall of Fame coach.

What is now the most desirable property in North American sports television was broadcast by both CBS and NBC in 1967. Contemporary reports said the networks paid about $1 million apiece for the rights and sold commercials for up to $85,000 per minute to an audience of more than 50 million. The NFL still insisted on blacking out the broadcast within 75 miles of the Coliseum, meaning the Los Angeles area largely couldn't see it without a ticket.

And while SoFi Stadium will be packed to the rafters later this month, the first Super Bowl was not a sellout, with only about 62,000 fans in the 93,000-seat Coliseum. That's understandable: The TV blackout offended some football fans, while many local fans balked at the $12 price tag on the best seats. Yes, twelve dollars.

The halftime show at the Coliseum featured the Anaheim High School drill team, along with the bands from the University of Arizona and Grambling State. The crowd also oohed at two men wearing hydrogen peroxide jet packs flying 100 feet in the air and landing at midfield before the show climaxed with the release of thousands of helium balloons and hundreds of pigeons.

With each team using the official football of its respective league when on offense, the game itself wasn't suspenseful yet still a fairly entertaining display by two offenses led by future Hall of Famers Bart Starr and Len Dawson.

Under clear skies and with temperatures in the 50s, the underdog Chiefs hung with Green Bay in the first half and kept it even until late in the second quarter, when Jim Taylor's TD run put the Pack ahead to stay.

The Chiefs capably represented themselves and their much younger league, but the first Super Bowl belonged to the Packers and their famed coach. The victory cemented the reputation of the small-market Packers as an iconic football institution, a symbol of excellence and hard work under Lombardi’s famous command.

“Kansas City is a real tough football team, but I don’t think it rates with the top teams in the National League,” Lombardi said afterward. "I don’t think they showed us anything different than we expected.”

And the trophy for the Super Bowl winner has borne Lombardi's name since his death in 1970.