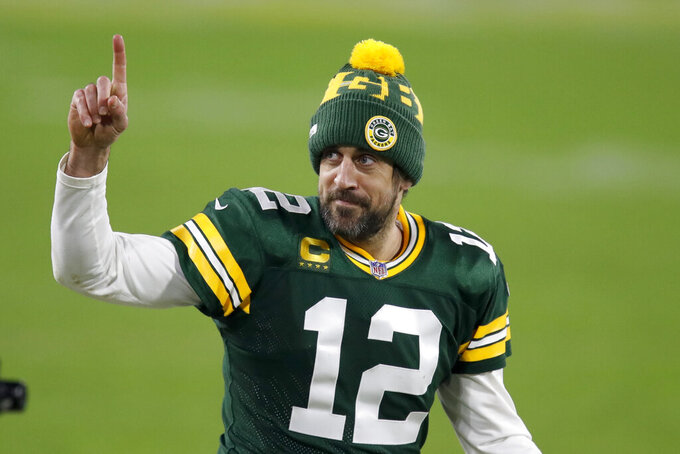 As Aaron Rodgers spoke with reporters in the wake of Green Bay's lopsided loss at San Francisco in the NFC championship game last year, the superstar quarterback expressed an optimistic outlook for the Packers that came with one caveat.

“We’ve got to get one of these at home,” Rodgers said.

The achievement has been unlocked for the first time in his 13 seasons as the starter, with the top-seeded Packers set to host Tampa Bay on Sunday afternoon. They've played in three NFC title games on the road under Rodgers.

Despite the relatively mild forecast — a high of 28 degrees with a chance of light snow — and the recent assertion by Buccaneers coach Bruce Arians that the weather won't affect the results “at all,” no NFC opponent would ever prefer a January game at Lambeau Field to the alternatives.

Even with virus protocols limiting ticket sales to a scant 6,500, there’s still energy for the Packers to be gleaned from the hardy fans that will be spread out on the shiny metal benches around the oval-shaped stadium.

“It felt like 50,000 when we ran out of the tunnel, it really did,” Rodgers said after Green Bay beat the Los Angeles Rams in the divisional round. “It was such a special moment. Forgot how much you truly, truly miss having a crowd there."

This goal of playing on home turf for a spot in the big game has frequently eluded the storied franchise, actually, long before Rodgers took the reins.

Only three times previously in the 55-year Super Bowl era — the neutral-site championship began with the 1966 season — have the Packers staged a semifinal at Lambeau Field.

Including the four pre-merger years when the AFL and NFL champions were pitted against each other, prior to the establishment of the current conferences, Pittsburgh (11) leads the overall host list. San Francisco (10), New England (eight), Denver (seven), the Oakland/Los Angeles/Las Vegas Raiders (seven), Dallas (six), Philadelphia (five) and Washington (five) have all played more of them at home than the Packers.

Here's a look back at the other three:

The Packers took home the first two Super Bowl trophies, but their win over Dallas to simply get in the second one still stands as one of the most remarkable performances in league history.

Lambeau Field's familiar label — the “frozen tundra” — can essentially be traced back to this game, which became forever known as the “Ice Bowl” after it began with a kickoff temperature of 15 degrees below zero and a wind chill factor in modern calculations of minus-48. The air was so cold that referee Norm Shachter's whistle froze to his lips and tore off a chunk of flesh when he pried it off, prompting a subsequent switch by the NFL to plastic versions.

Coach Vince Lombardi uncharacteristically skipped a tying field goal try and ordered an all-or-nothing play, when quarterback Bart Starr plunged across the goal line with 13 seconds left for the lead behind a devastating block from guard Jerry Kramer.

“I didn’t figure all those people up there in the stands could take the cold for an overtime game,” Lombardi said. “You can’t say I’m always without compassion.”

After losing in the playoffs to Dallas three straight years, the Packers were done a favor when Carolina — in its second season of existence — defeated the Cowboys in the divisional round. The balance of NFC power had begun to shift that year to Green Bay, which looked every bit the part of the top seed with Brett Favre guiding the offense and Reggie White dominating on defense.

The Packers were such a popular pick to win it all that season that coach Mike Holmgren even enacted a ban in training camp of the words “Super Bowl” from their vocabularies.

With a game-time temperature of 3 degrees, Favre let running back Dorsey Levens do most of the work with 205 total yards that helped overcome two early turnovers. The Packers went on to beat New England for their first title since the Ice Bowl squad.

Over the next nine seasons after the consecutive Super Bowl appearances in Favre's prime, from 1998-2006, the Packers went just 2-5 in the playoffs and didn't get past the second round as he annually and openly mulled retirement.

Favre had one of his best years in 2007, as the Packers went 13-3 in the regular season and cruised to the NFC championship game against a wild card team in the New York Giants that was finally beginning to find its footing behind quarterback Eli Manning.

Home field was not an advantage for Green Bay that day, with a temperature that dropped to minus-4 degrees when Favre — looking every bit his age of 38 — telegraphed a pass for Donald Driver on the second play of overtime. Corey Webster intercepted it to set up the winning field goal, and the Giants went on to beat unbeaten New England in the Super Bowl.

“This game, even when it was going back and forth, you just had a sense that it’s going to fall into place for us,” said Favre, who was traded to the New York Jets the next season after initially telling the Packers he was finished. "That wasn’t the case.″