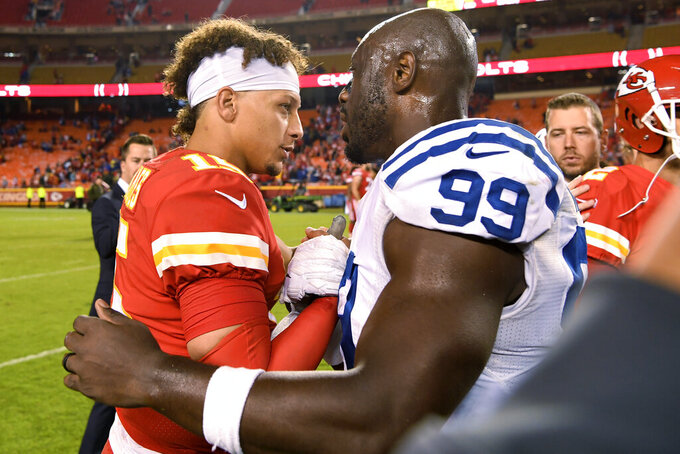 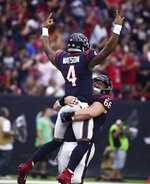 KANSAS CITY, Mo. (AP) — The relationship between Chiefs quarterback Patrick Mahomes and Texans counterpart Deshaun Watson goes back well beyond the 2017 draft, when along with Mitchell Trubisky they were considered among the best prospects at their position.

It goes back to their college days, when Mahomes was orchestrating the "Air Raid" offense at Texas Tech and Watson was trying to navigate Clemson to a national championship.

"I think we were going into our junior year," Mahomes recalled, "and we went to a QB camp out in California. I talked to him, back and forth, about how he did his stuff at Clemson, how I did my stuff at Texas Tech. He's a great player. We kind of hit it off."

They stayed in touch during the draft process, too.

"We took a lot of the same visits," Mahomes said, "and we went to the same places, and we would talk to each other about what we went through. But we didn't necessarily knew where we would go."

Trubisky wound up going second overall to Chicago. And when nobody grabbed a quarterback in the next eight picks, the Chiefs traded up to No. 10 and chose Mahomes over Watson as the heir apparent to Alex Smith. Watson wound up going two picks later to the Texans.

All three quarterbacks have flourished to some extent. On Sunday, two of them will get to square off when Mahomes leads the Chiefs (4-1) against Watson and the Texans (3-2) at Arrowhead Stadium.

Yes, it was Mahomes who rewrote the record books during his MVP season a year ago, and he is off to another blazing start this season. But it is Watson who comes into the AFC showdown with the hot hand, having thrown for 426 yards and five touchdowns while running for 47 yards last week against Atlanta.

"He's a heck of a player. We had him in here before the draft," Chiefs coach Andy Reid said. "We thought the world of him. I know he was a heck of a player in college and he carried it over and he's playing really good football. I don't know exactly what they're asking and not asking him to do, but whatever they're asking him to do, he's doing it well."

The matchup Sunday is more than just Mahomes vs. Watson, though. Here are some other story lines:

The Chiefs hope to get wide receiver Tyreek Hill on the field for the first time since breaking his collarbone Week 1 in Jacksonville. But they are poised to play without several key players, such as wide receiver Sammy Watkins (hamstring), defensive tackle Chris Jones (groin) and left guard Andrew Wylie (ankle).

Texans wide receiver Kenny Still is still recovering from a hamstring injury, though it appears his bothersome ankle is finally better. Elsewhere, interior offensive lineman Greg Mancz has been out with a concussion and running back Taiwan Jones has been slowed by a hip injury.

The Colts slowed down the Chiefs by playing a bunch of man-to-man defense, and the Texans are likely to follow the same blueprint. But the Chiefs also have spent the week trying to fix their issues from last week, resulting in an intriguing offense-defense chess match Sunday.

"They obviously played a great game," Texans defensive end J.J. Watt said of the Colts. "They went in there and stuck to their game plan and executed very well and came out with the win."

Tyrann Mathieu picked off his first pass as a member of the Chiefs last week, and he'd like nothing more than to get his second against the Texans. Mathieu had a big year with Houston last season, and the club wanted to keep him around, only to see the Chiefs win the bidding in free agency.

One of the most effective personnel groups for Houston this season has been "12 personnel," which means a set with one running back and two tight ends. But why has it worked so well?

"It's a good question," Texans coach Bill O'Brien said. "It has a lot to do with what you're going to see defensively. We've got a lot of different combinations of personnel groupings we can use and we try to study and we try to think about, defensively, how they're going to attack it. 'What personnel are they going to use? What's going to be their scheme, and how does that fit what we want to do?' ... And sometimes it works. Hopefully it works more than it doesn't."