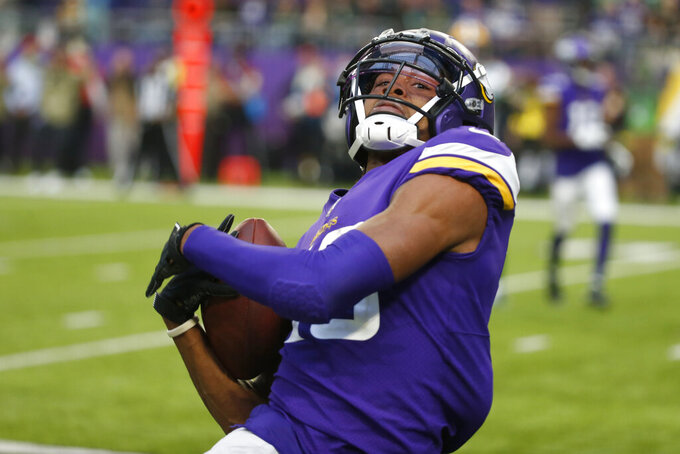 MINNEAPOLIS (AP) — Much to coach Mike Zimmer's consternation, the Minnesota Vikings have made quite the habit of these white-knuckle, high-stress finishes.

All that experience must be paying off. They deftly followed the winning formula for beating Green Bay by making sure Aaron Rodgers was on the sideline at the end and not on the field.

Greg Joseph made a 29-yard field goal as time expired to give the Vikings a 34-31 victory over the Packers in a classic back-and-forth with their division rival and longtime nemesis.

“You know how they say, ‘Sunday is fun day?’ It’s not, at all,” an exhausted Zimmer said after the game was decided on the final snap for a sixth time in 10 games. The Vikings (5-5) have won three and lost three of those.

The only team in the NFL this year to hold a lead of seven or more points in every game, all but one of Minnesota's games have been decided by one score. Kirk Cousins passed for 341 yards and three touchdowns to help the Vikings stay a step ahead of Rodgers for most of the afternoon.

“Hopefully going forward we can kind of find our way to put the forks in teams, put them away when we have to, but we’re still trying to learn how to do that,” cornerback Patrick Peterson said. “I think continuing to have these situations will continue to get us better.”

Rodgers threw four touchdown passes, all on Green Bay's final four full possessions, excluding a kneel-down to end the first half. All of those drives covered 74 yards or more.

Rodgers finished 23 for 33 for a season-high 385 yards for the Packers (8-3). After missing time earlier to COVID-19, Rodgers was unable to practice much this week because of a toe injury.

“It’s very, very painful. I got stepped on in the first half, and that kind of activated all the symptoms that I was having,” Rodgers said. “It’s going to be another painful week next week, and then hopefully I can get healed up during the bye.”

Justin Jefferson had eight receptions for 169 yards and two scores for the Vikings, including a third-down catch against rookie Eric Stokes that Cousins delivered for a 23-yard touchdown while being decked on a blitz by Darnell Savage. Dalvin Cook ran in the 2-point conversion to make up for an earlier missed extra point by Joseph.

On the next play from scrimmage, Rodgers threw a rainbow to Marquez Valdes-Scantling streaking past safety Xavier Woods for a 75-yard score to tie the game just before the two-minute warning.

“Every play with this guy is a fight. You just hope, when they go down and score in one play, that the offense can come back and do what they did,” Zimmer said. “So I was proud of them for that.”

When the Vikings regained the ball, Cousins nearly cost himself the comeback by slightly underthrowing Jefferson, whom Savage darted in front of to intercept the ball. He bobbled it on the way down, though, and a replay review overturned the call.

Cousins then went 3 for 3 for 51 yards on the next three snaps, and Cook — who rushed for 86 yards and a touchdown — ran for one more first down. Then the Vikings kneeled down twice to set up the final kick by Joseph.

“It’s just life in the NFL. It’s exciting. I certainly understand why people want to follow and watch it,” Cousins said.

The Vikings posted the highest score against the Packers since their 38-3 loss to New Orleans in the season opener. Green Bay gave up just 34 points over the previous three games.

Preston Smith had two sacks, but the Packers didn't have the same pass rush with outside linebacker Rashan Gary (elbow) sidelined. Za'Darius Smith and Whitney Mercilus are also out with long-term injuries.

Rodgers threw to Davante Adams twice for touchdowns, including an 18-yard strike on third-and-6 midway through the fourth quarter when he was trying to call timeout before the shotgun snap.

Adams has 12 scoring receptions against the Vikings, the most by any opposing player.

“When you’re playing an offense that’s hot and has a hot quarterback and stud receivers and a stud back, you’ve got to keep scoring,” Rodgers said. “We’ve got to start faster.”

Jefferson became the first player in the league this season to top 100 receiving yards in the first quarter. He drew a 37-yard pass interference penalty on Savage in the second quarter, a big boost on a drive that ended with a 10-yard touchdown pass from Cousins to Thielen on third-and-goal for a 16-3 lead. Kingsley Keke's helmet-to-helmet hit on Cousins triggered a roughing-the-passer penalty and erased an interception by Savage on that eventful possession.

For all the success that was fueled by aggressiveness, the Vikings swung the momentum to the visitors when a toss sweep to fullback C.J. Ham on third-and-1 at their 29 was stopped for no gain late in the second quarter. The Packers went the other way for Josiah Deguara's first career scoring catch to cut the lead to 16-10.

Packers: Elgton Jenkins went down in the fourth quarter with an apparent injury to his left knee and was carted to the locker room. After a Pro Bowl selection in 2020 at LG, Jenkins has replaced David Bakhtiari at LT this season. Bakhtiari has yet to return from a torn ACL suffered last year.

Vikings: Peterson (hamstring) returned from a three-game absence. He missed some time while getting treatment on the sideline late in the second quarter but returned after halftime.

The Packers host the Los Angeles Rams next Sunday, trying to avoid consecutive losses for the first time since a three-game skid that prompted the firing of coach Mike McCarthy on Dec. 2, 2018.

The Vikings play at San Francisco next Sunday.