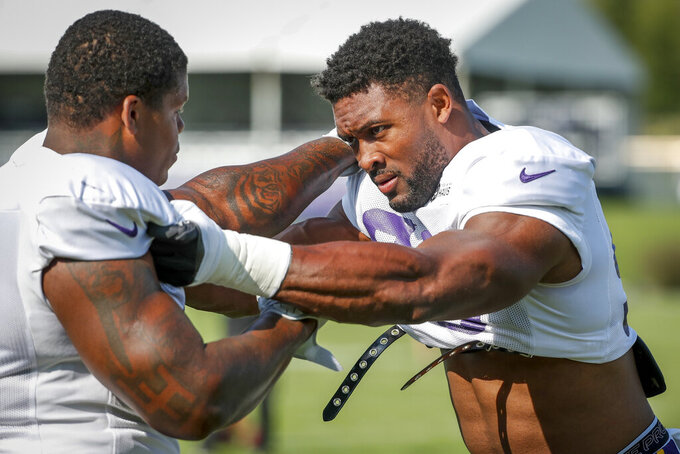 EAGAN, Minn. (AP) — Za'Darius Smith wore a wide smile in the Minnesota locker room before practice on Monday, a knowing expression that exuded the eagerness of getting to his first game with the Vikings.

The eighth-year outside linebacker didn't want to divulge any depth of the feelings he might be harboring about facing his former team, Green Bay, this weekend. His confident and relaxed demeanor did the talking for him.

“He’s got a different energy already. I don’t know if he just took like a three-day nap,” teammate Harrison Phillips said a few cubicles down, “but he is fired up.”

The week before Smith signed a contract valued at $42 million with the Vikings, he was released by the Packers for salary cap savings.

“I had a whole year off, and now I get the opportunity to go back and do something that I love,” said Smith, whose 2021 season was limited to one game because of a back injury. “Just happy. Can’t wait."

Smith, who turns 30 on Thursday, quickly became part of the heart of the Packers' defense he joined in 2019 after playing his first four years in the league with Baltimore. The process has played out similarly in Minnesota this summer, a vital leadership role that was promised to him during the recruitment in free agency.

“You need to have a guy who’s got energy,” said Phillips, the nose tackle who also is in his first season with the Vikings after arriving as a free agent from Buffalo. “When adversity is going to face us at some point in the season, he can be a ‘hoo-rah, rah-rah’ type guy. Sometimes you need that kick in the butt, and I think a lot of us would look to him for that.”

The pass-rushing potential of putting him and Danielle Hunter on the edges of the well-regarded scheme introduced by new defensive coordinator Ed Donatell made Smith a natural target in free agency for Minnesota.

The fact that Smith played in a similar defense with Green Bay? Even better. Vikings assistant head coach Mike Pettine was his defensive coordinator for his first two years with the Packers, and outside linebackers coach Mike Smith — who also holds the title of pass rush specialist — was plucked off Green Bay's staff, too.

New nickel cornerback Chandon Sullivan is another expat from the Packers, slotted in the primary lineup between Patrick Peterson and Cameron Dantzler. Albeit with a lesser stature, Sullivan also spent the past three seasons with the Packers, who won the NFC North each time.

“It’s my first chance to really show myself in a Vikings uniform. First game of the season, there’ll be a lot of emotions. Then I get to play my old team,” Sullivan said. “I’m just ready to hear those fans. The preseason game I got my first taste of it, and I had chills all over my body. So I’m ready to hear that chant and make a play.”

Said O'Connell: “I’d like to think each and every week is going to be important to those guys, but I’d be lying if I said I didn’t expect them to be that much more dialed and that much more focused this week knowing that they want to get off to a great start against their former team."