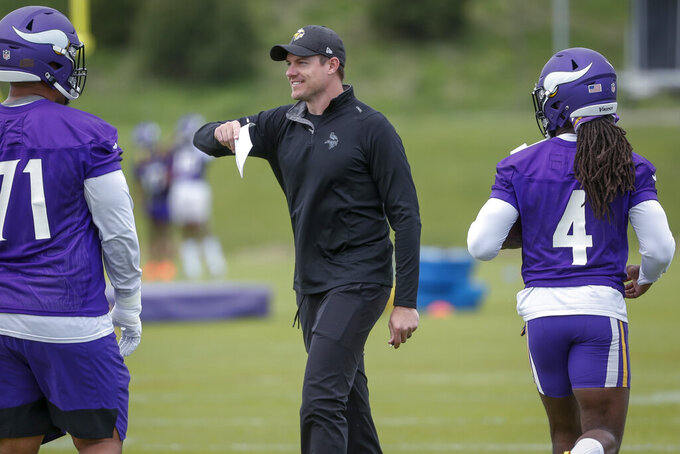 LAST YEAR: The Vikings missed the playoffs for a second straight year, prompting the firing of head coach Mike Zimmer and general manager Rick Spielman. They never fully recovered from losing the first two games at Cincinnati and Arizona on game-ending field goals, an OT make by the Bengals and a last-second miss by Greg Joseph against the Cardinals, and failed to post a winning record at any point in the season. QB Kirk Cousins was as productive as he's been in four years in purple, especially when targeting star WR Justin Jefferson, but intermittent struggles against an interior pass rush persisted as the Vikings again lacked consistency at center and guard. The defense was the biggest drag, ranking in the bottom third in the league in most measures. Losing star pass rusher Danielle Hunter to a second straight season-ending injury by Week 8 was a big blow.

CAMP NEEDS: Getting Cousins as comfortable as possible with another new play-caller will be important, but the 11th-year veteran has prior experience with O'Connell in Washington. The spotlight will again be on the young secondary, with CB Patrick Peterson and S Harrison Smith both back to carry a heavy load in both their play and their leadership. Keeping everyone healthy will be critical, too. The newcomer Za'Darius Smith had his 2021 season with Green Bay wiped out by a back injury, and he's eager to show his new team and his old rival that he's still one of the NFL's premier pass rushers. LT Christian Darrisaw is another key player whose impact was minimized last year by injury, a slow recovery from groin-area surgery keeping the 2021 first-round draft pick out of the starting lineup until midseason.

KEY CAMP COMPETITIONS: As unglamorous as the RG spot is, this will be the most relevant position battle of the preseason with the veteran Davis on the inside track, another experienced NFL starter in Reed getting a long look and the rookie Ingram carrying plenty of potential. Garrett Bradbury enters a contract year at center, his spot hardly secure, but there's not an obvious replacement on the roster. The second-round draft pick Booth will challenge Cam Dantzler for a starting spot at CB.

EXPECTATIONS: With the installation of the Adofo-Mensah/O'Connell regime, the pressure is off as the new leaders implement their collaborative process throughout the organization. On the other hand, the Vikings treated the offseason as if they're in win-now mode by re-upping with Cousins, bringing back Hunter on a hefty salary-cap hit and signing his pass-rushing bookend in Smith. Team ownership has said there's no desire for a full rebuild, and there's clearly enough existing talent on the roster to get back to the playoffs.