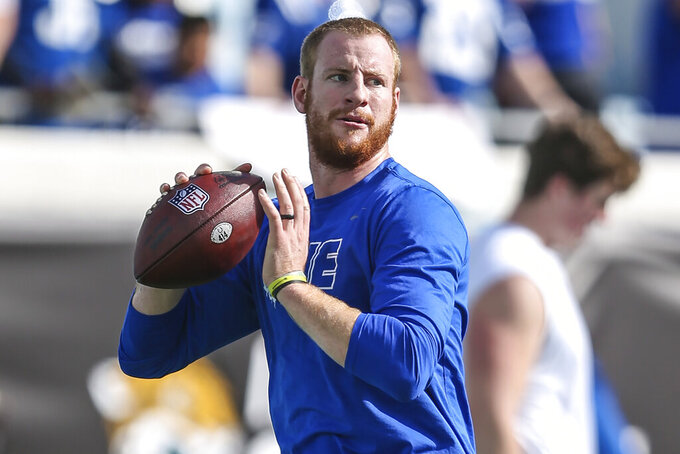 FILE - Indianapolis Colts quarterback Carson Wentz (2) throws a pass during warm-ups before of an NFL football game against the Jacksonville Jaguars, Sunday, Jan. 9, 2022, in Jacksonville, Fla. The Washington Commanders have agreed to acquire quarterback Carson Wentz from the Indianapolis Colts, according to a person with direct knowledge of the situation. The person spoke to The Associated Press on condition of anonymity Wednesday, March 9, 2022, because the deal cannot be finalized until the start of the new league year next week. (AP Photo/Gary McCullough, File)

So what if it's old news? Here's some brand new news: Super Bowl champion linebacker Von Miller is leaving Los Angeles for Buffalo.

And star receiver Julio Jones is looking for work.

On Wednesday, teams could come clean after all the recent leaks made those moves — and dozens of others — common knowledge throughout the NFL.

Yes, the 2022 business year has begun, and with it come the official announcements of who is going where for what and how much.

Miller's move across the country was the headline grabber Wednesday. He is getting a six-year deal from the Bills and will pursue winning a third NFL title with a third franchise. He got a ring with Denver in 2015 and last season with the Rams.

The biggest star released Wednesday was wideout Julio Jones by Tennessee. He lasted only one injury-filled year with the Titans. The 33-year-old Jones will be designated as a post-June 1 release with the Titans carrying the cap hit until then.

The Titans traded for Jones last June but he started only 11 games, counting the postseason. Jones finished with a career-low 31 catches for 434 yards and one touchdown.

By far the biggest blockbuster — at least until Houston finds a team for quarterback Deshaun Watson — is Wilson moving from the Seahawks to the Broncos. Seattle gets, hold your breath, two first-round draft picks, two second-rounders, a fifth-rounder, and three players: quarterback Drew Lock, tight end Noah Fant and defensive tackle Shelby Harris. All could be starters, though the Seahawks likely prefer a different No. 1 QB.

“Russell has been a tremendous player, leader, and member of our organization since the day we drafted him in the third round in 2012,” said Seattle general manager John Schneider. “His tireless work ethic has helped make him one of the most successful QBs in NFL history and we thank him for his many contributions on the field and in the community.

“When it became evident that Russell was interested in playing elsewhere, we used that opportunity to explore the market, allowing us to acquire three quality players, tremendous draft capital, and create salary cap flexibility. We have a clear vision about the direction of this team, and this is an exciting time for our organization.”

While Denver filled its need behind center, as did Tampa Bay when Tom Brady ended his 40-day retirement — yes, really he did — and Aaron Rodgers stayed put in Green Bay with a three-year megadeal, several other teams are scrambling to find their passer. Some of those, including Carolina, New Orleans and Cleveland, have been in discussions with Watson, who will not be criminally charged after 22 women accused him of sexual assault or harassment. Watson sat out last season and still faces civil lawsuits and perhaps an NFL suspension.

Pittsburgh, which hasn't had a QB opening since Ben Roethlisberger was drafted in 2004, signed Mitchell Trubisky away from Buffalo, where he backed up Josh Allen, to compete for that spot.

Wentz apparently wore out his welcome in Indianapolis very quickly after Colts coach Frank Reich brought him aboard last year. He gets another chance to re-establish some winning credentials for the Commanders, and in the same division as his first pro team, the Eagles. That should get juicy when those teams face off.

Cleveland, which might or might not have Baker Mayfield throwing to Cooper, depending greatly on where Watson lands, let another veteran receiver, Jarvis Landry, walk. Coach Kevin Stefanski says Cooper “has been a consistent playmaker in this league. He is a great route-runner. His skillset fits perfectly with what we want to do on offense. On top of that, he is all about that work. He’s a team player to his core.”

One team that quickly addressed its biggest weakness happens to be a conference champion. The Bengals, desperate for some pass protectors to keep Joe Burrow upright and uninjured, added Tampa Bay guard Alex Cappa and swing lineman Ted Karras of New England.

Busiest of all has been a team at the other end of the AFC spectrum: Jacksonville.

The Jaguars had tons of money to spend, so they spent. They brought in two receivers to help second-year quarterback Trevor Lawrence in Christian Kirk of Arizona and Zay Jones of Las Vegas. Former All-Pro Scherff already is their best blocker without having suited up for them yet. The defense was aided at all three spots with Atlanta linebacker Foy Oluokun, a tackling machine; cornerback Darious Williams of the Super Bowl champion Rams; and tackle Foley Fatukasi, a solid run stopper.

“We hope to get this organization to the point where we’re not relying on free agency as much,” Jags general manager Trent Baalke said. “We’re relying on our drafts and giving second contracts to those guys.”

And don't forget, they have the top pick in next month's draft.