Vrabel has Titans atop AFC South despite injury-filled year 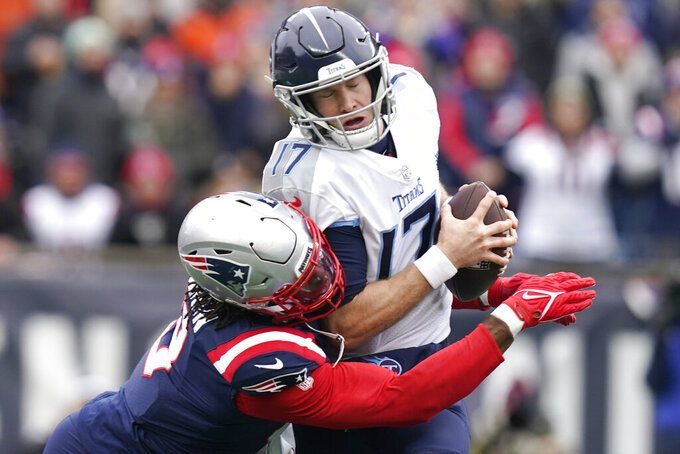 Vrabel watched his father handle wins, losses all the while managing injured players as a high school boys' basketball coach in Ohio. He also coped with those himself as an All-American at Ohio State and a 14-year player in the NFL.

The biggest lesson? Don't worry about the past or try to control the future.

“When the adversity hits, you have a base, a place to be grounded and a focus that the players can all come together,” Vrabel said. “Coaches can figure out what the situation is and try to lead everybody in the right direction.”

Vrabel is tapping all those skills in guiding his Titans through an injury-plagued season to an 8-4 record at the bye. His Titans sit atop the AFC South with a two-game lead and the tiebreaker over Indianapolis in a bid to repeat as division champs, and only a two-game skid dropped them to third from first in the AFC.

That's despite using 86 players — most in the NFL since 1993 — and 49 starters. Tennessee currently has 18 players on injured reserve including reigning NFL Offensive Player of the Year Derrick Henry, both starting wide receivers in A.J. Brown and Julio Jones and starting outside linebacker Bud Dupree.

Still, the Titans are 7-0 against 2020 playoff teams including wins over Buffalo, Kansas City, the Colts, Rams and Saints during a five-game winning streak.

Left tackle Taylor Lewan credits Vrabel with keeping every new player on his toes and ready to contribute to meet the need for the next man up. Vrabel sets the tone in meeting rooms starting with what Lewan called the coach's “15-minute comedy sessions” to loosen everyone up.

Daydreaming or simply staring at the lights is impossible when Vrabel has the floor because quiz time follows the jokes.

“Everyone is expected to know the game plan,” Lewan said. "He’ll call on any guys, guys that are backups, guys that are starters. And he does a great job of making sure everyone’s ready and educated on what we’re doing that week.”

That approach has worked. The Titans signed Bobby Hart off Buffalo's practice squad Oct. 20, and Hart played 42 snaps at left tackle in a win over Kansas City four days later.

Linebacker Dylan Cole was signed Nov. 16 and forced a key fumble on a kickoff to start the third quarter in a win over the Saints.

Houston coach David Culley coached in Pittsburgh when Vrabel started his NFL playing career with the Steelers and sees a lot of Vrabel in the Titans.

The Titans see Vrabel as someone who knows well the stress and challenges they deal with off the field with family time treasured. An added attraction to Tennessee's trip last week to New England was the chance for Vrabel to visit with his oldest son, a left tackle at Boston College.

Brown, a 2020 Pro Bowl wide receiver, mentioned how much he appreciates Vrabel when he recently discussed dealing with depression that had him thinking of taking his own life a year ago. Brown said Vrabel listened and tried to help as much as possible, to the point the receiver considers his coach family.

“I know this is a business and sometimes you don’t want to get emotionally attached or tied with someone because of the business side of it,” Brown said of Vrabel. “But I appreciate him so much. People like that, no matter how this business might go, forever I will be a friend of his and he will be a friend of mine.”

Mental health is a priority for Vrabel and the Titans who are always offering help to players and checking in on players recovering from injuries.

“This is a very unforgiving business,” Vrabel said. “We are always going to have to put somebody in there. They make us have 48 on gameday and 11 on every snap. We are always going to find guys. Sometimes when you are hurt you feel somewhat distant from the team because there is nothing you can do.”

Figuring out who's healthy enough to help the Titans down the stretch is Vrabel's next challenge. Tennessee has only one game remaining against an opponent with a winning record, San Francisco on Dec. 23, though the Titans will have to prove they can beat teams with losing records after losses to the Jets and Texans.

Jones will be eligible to return if healthy against the Jaguars, Dupree against Pittsburgh on Dec. 19 and Brown against the 49ers. A handful of other Titans also should be healthier after the bye.

Vrabel isn't looking at the stretch run. Not yet.

“I am very hopeful that it is going to help us and that everybody will be ready to get back to work here and get ready for Jacksonville,” Vrabel said.