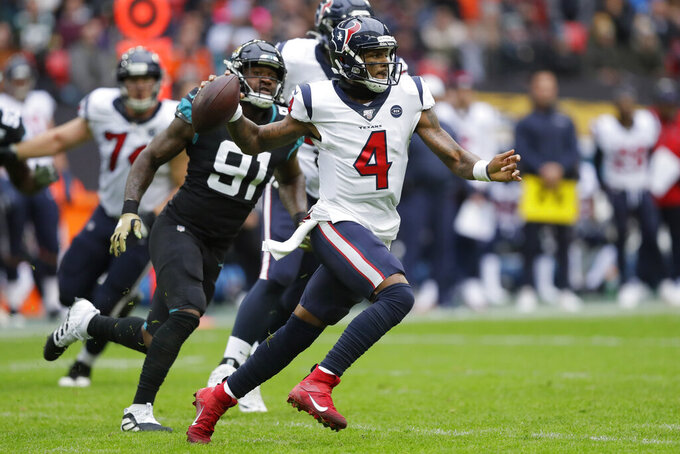 Houston Texans quarterback Deshaun Watson (4) runs out of the pocket under pressure by Jacksonville Jaguars defensive end Yannick Ngakoue (91) during the first half of an NFL football game at Wembley Stadium, Sunday, Nov. 3, 2019, in London. (AP Photo/Kirsty Wigglesworth) 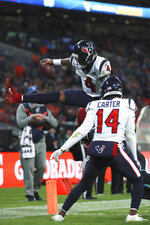 HOUSTON (AP) — After the Houston Texans improved to 6-3 with a win over the Jaguars before their bye week, DeAndre Hopkins was asked to make the case for Deshaun Watson to be the league's MVP.

"Deshaun can make the case for himself from his play," Hopkins said. "I can't. I can get up here and say a thousand words, but if you watch him play, his play speaks for himself and what he can do. Not just run the football, but throwing the football, getting out of the pocket and helping his team win."

Indeed. Watson's development in his third NFL season has the Texans leading the AFC South and made his name firmly planted in the MVP conversation more than halfway through the season.

Watson has wowed with spectacular plays in recent weeks. But what's been most valuable to the Texans is his consistency in leading a powerful offense that has carried the team in a season when the defense lost Jadeveon Clowney to a preseason trade before J.J. Watt suffered a season-ending injury last month.

"He's a great player," offensive coordinator Tim Kelly said. "Every time he steps on the field, we have a chance to win. He's capable of making great plays and hopefully he can keep doing that for us whenever we take the field."

Watson, who was the 12th overall pick in the 2017 draft, leads an offense that ranks third in the NFL by averaging 396.7 yards a game. His 2,432 yards passing rank sixth in the league and his 18 TD passes are third.

But perhaps more impressive than all the numbers he's putting up is an innate ability to win. From Clemson coach Dabo Swinney to Houston coach Bill O'Brien to opposing coaches around the NFL, almost everyone who is asked about Watson brings up the fact that regardless of anything else, Watson is simply a winner.

Swinney, who won a national championship with Watson in 2017, believes so strongly in his former quarterback that before the draft that year, he said that if the Browns didn't draft him with the first overall pick it would be like "passing on Michael Jordan."

That comment has led people to say that Swinney was comparing the quarterback to perhaps the greatest basketball player of all time. He was asked about Watson and Jordan by reporters again this week and clarified his statement, but he stuck to his original supposition about the most important quality he believes Watson possesses.

"I just meant he's a winner and a killer like Michael Jordan," Swinney said. "I didn't mean he's Michael Jordan. I mean, he's got a will to win that is rare. And you only see that every now and then. And when I think of that, I think of Jordan, who would claw your eyeballs out to win.

"He's just a winner and that's what Deshaun is ... I had to call Deshaun and say: 'Hey man, sorry I put you in this position,'" Swinney continued.

But Swinney isn't the only one who has brought up Jordan when speaking of Watson. After he got kicked in the eye and still managed to escape a defender to throw a touchdown pass in a win over Oakland two weeks ago, Raiders coach Jon Gruden did it, too.

"What do you want me to say? You see Michael Jordan, you see some of the great athletic plays in any sport, you've got to tip your hat to the guy," Gruden said. "We had him three times, and then he makes an unbelievable throw and the kid makes a great catch."

Watson isn't getting caught up in the MVP hype. He's happy about his work so far but knows he has a lot more to do if he and the Texans hope to not just reach the postseason this year but make a deep playoff run.

"It's a good spot," Watson said. "Halfway through the season (there's) a lot to look back over the past weeks to correct, and then a lot to actually build on. So the biggest thing is really getting everyone healthy, getting everyone rested up for a long stretch, and for us to be able to try to make a run."

After the Texans play the Ravens next weekend following their bye, Watson will get a chance to showcase his talents to a national audience with two straight prime-time games at home against Indianapolis and New England.

"We have a lot more football to play and a lot of tough, challenging games that are coming up ahead of us," Watson said. "We're going to be ready."